Turning Can’t Into Can Since 2011: Peter’s Cerebral Palsy Journey 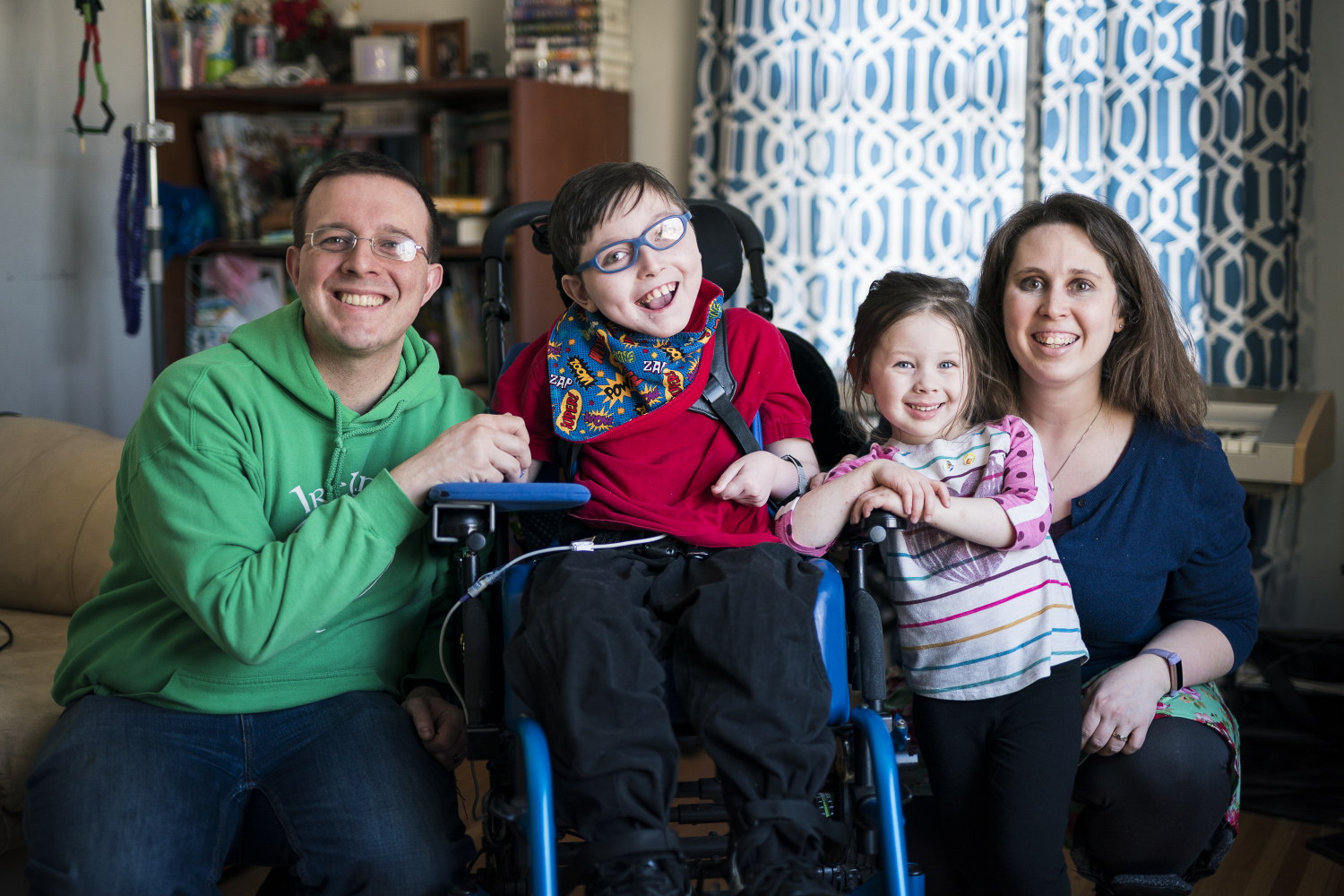 In all the ways that matter, Peter Adkins is your typical 8-year-old. He’s a protective older brother to his younger sister Katie, loves cars, sports and Star Wars. He’s easy to smile, quick to laugh and brings joy to all who meet him.

When you’re in Peter’s presence, the fact that he can’t speak quickly becomes an afterthought. Peter has spastic quadriplegic cerebral palsy (CP), and has received care at Gillette Children’s for most of his life.

The road he and his family have traveled that got them to now has been long and not always easy, but they have done it as they do all things: with grace.

“Peter was our first child. His pregnancy was completely normal,” Peter’s mother, Amanda Adkins recounts. “It wasn’t until he was born that we learned that something was wrong. Upon his birth, Peter was severely jaundiced. When he was three days old, they told us he had something called CMV. The news was stark. In no uncertain terms, we were told to make funeral preparations.”

CMV, or Cytomegalovirus (CMV), is a common virus that affects individuals of all ages. According to the Centers for Disease Control and Prevention, over half of adults have been infected with CMV by age 40. 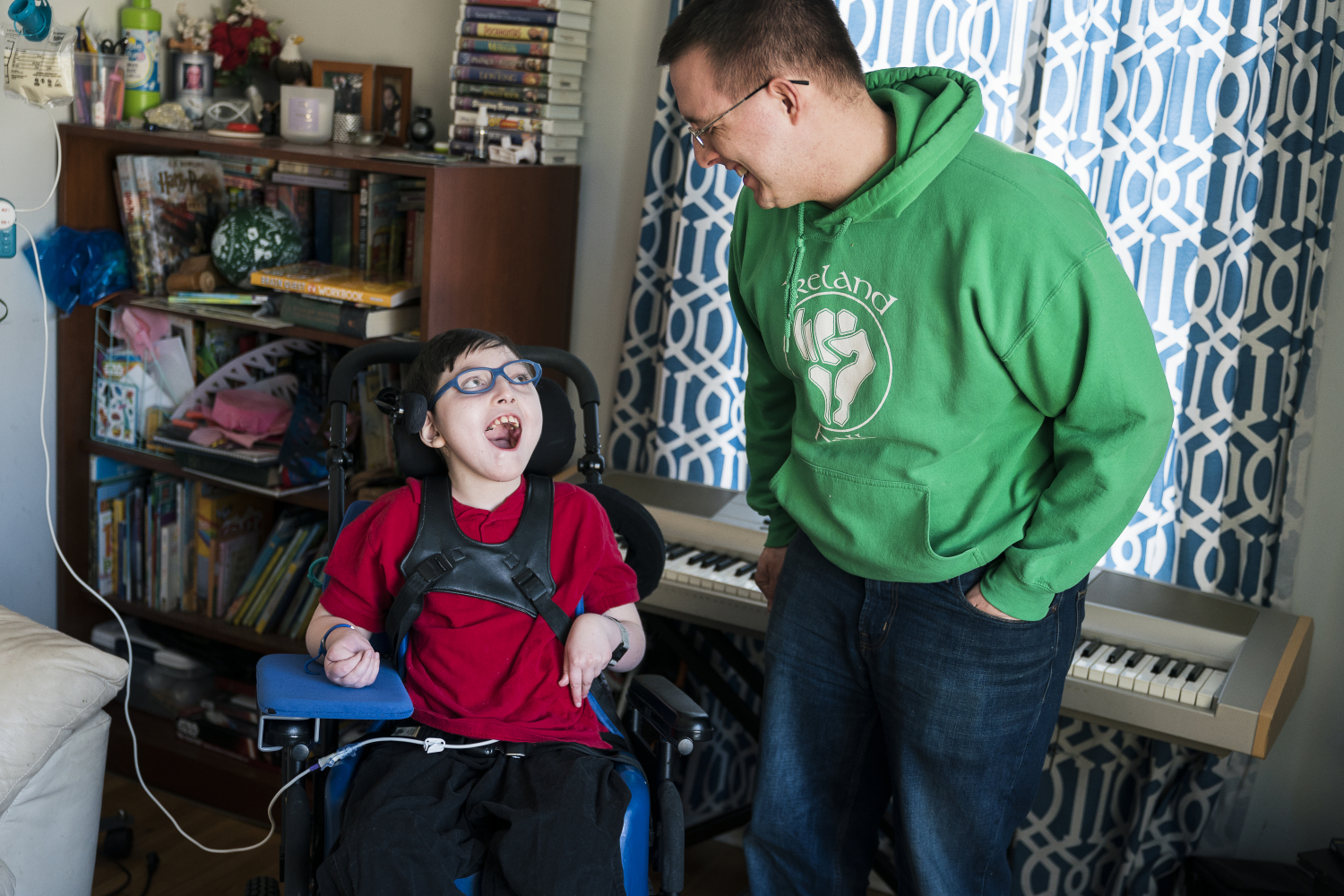 Peter was one of the one in five.

“It was truly strange because Peter was in the NICU with all of the other babies, most of them having been born prematurely. And there he was all 8 pounds of him. Other parents asked us why he was there,” Amanda recalls. “It was a rocky start to his life, but miraculously, he pulled through. After six days in the NICU, we were able to take him home. But we also had the full knowledge that he would likely face additional health challenges in the future.”

Cerebral palsy (CP) describes a group of disorders that affect a person’s ability to move and maintain balance and posture. CP is caused by brain injury or atypical brain development that happens around the time of birth or early in life.

In some infants, symptoms are evident soon after birth. In others, diagnosis comes in later infancy or toddlerhood. CP is a permanent condition, meaning the injury to the brain doesn’t progress, however, the effects of CP on the body often progress as people get older. 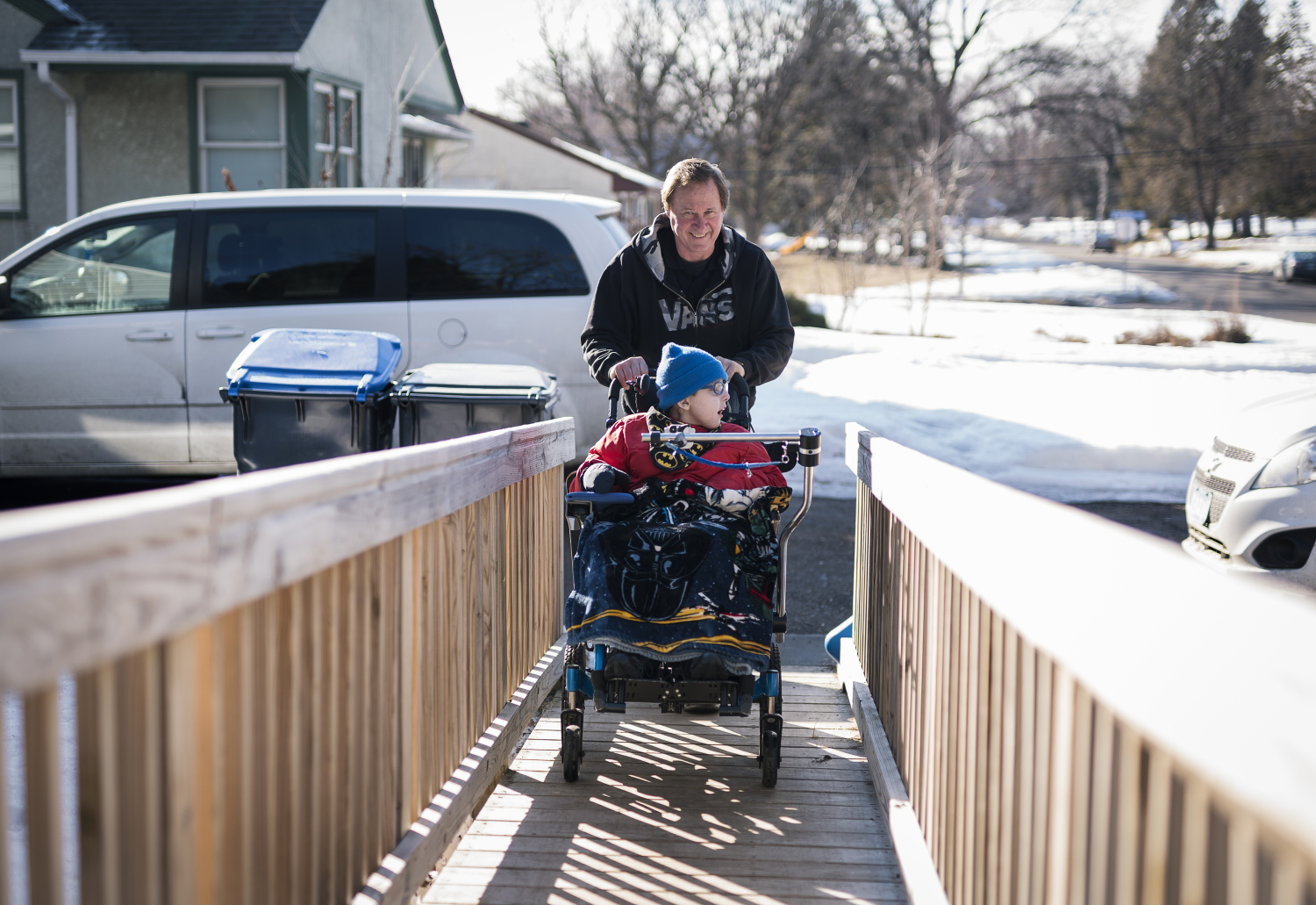 The severity of CP is a broad spectrum. Peter’s case was quite involved.

“We got Peter’s diagnosis of CP when he was 1. I’d be lying if I said it wasn’t heartbreaking. Especially when you start reading about the condition and trying to project what it would mean for Peter years down the road,”Peter's father, Scott says. “We were eventually connected with Gillette, and that was such a welcome change. It was clear that treating children like Peter was what they do, and that we didn’t need to figure everything out for ourselves.”

The Adkins began appointments with Angela Sinner, DO, a pediatric rehabilitation medicine physician at Gillette.

“I began seeing Peter when he was 18 months old,” Sinner says. “With a child who has a condition like Peter’s, there’s a steep learning curve for parents to traverse. So we start with the basics: coordinating therapies, muscle tone and spasticity management, along with feeding. Peter’s parents have been incredibly caring and attentive to his needs throughout the years and have faced their fair amount of challenges and rough periods of time. At Gillette we do all we can for our patients, but it is truly a collaborative effort that we share with our families.”

Leaving the Field a Hero: “That made his whole world” 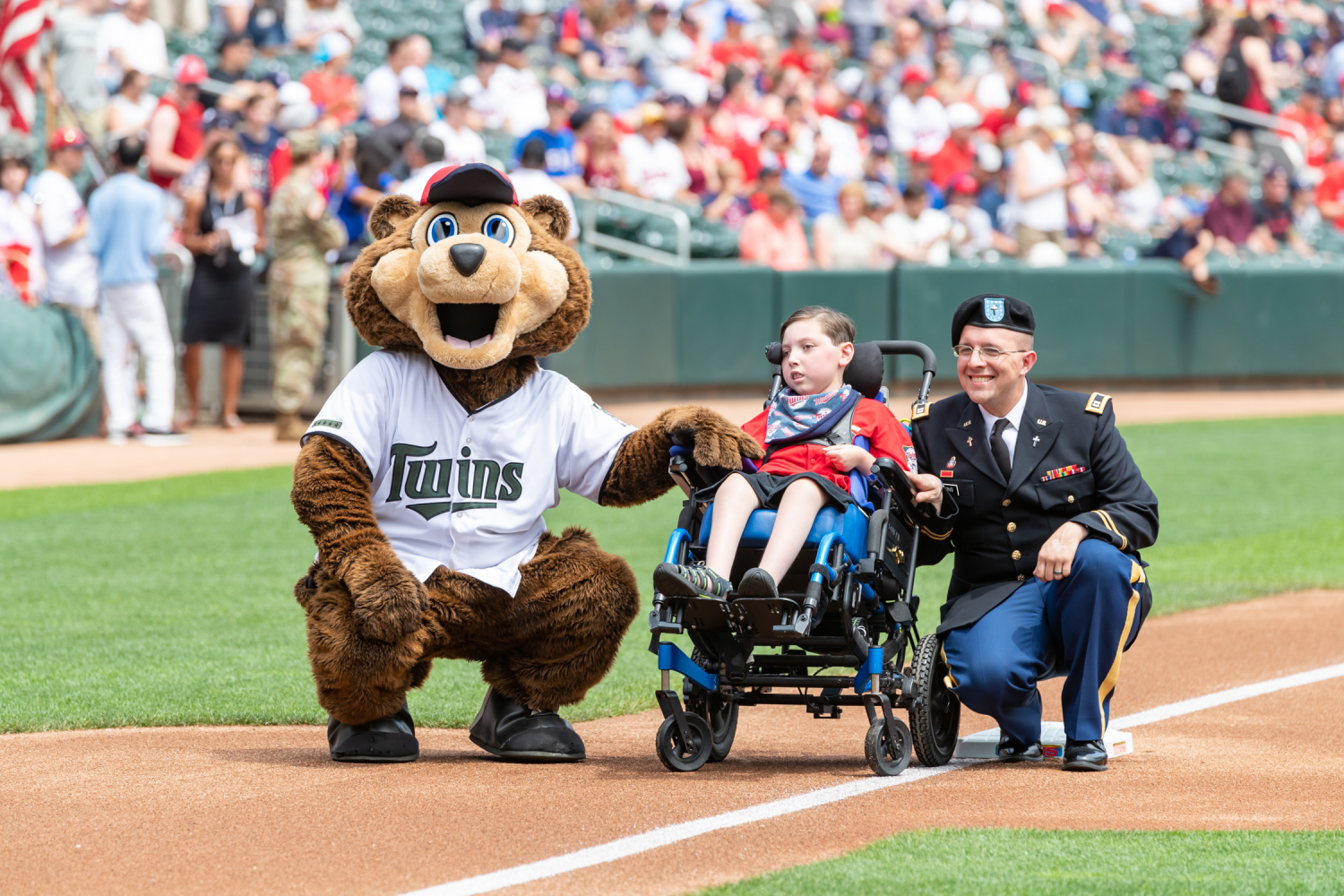 Just about a year ago in what feels like a different decade, Peter and his father Scott were the featured participants in a Sunday Minnesota Twins game at Target Field. July 7 was Armed Forces Appreciation Day.

Scott is a captain and chaplain in the Minnesota National Guard, and he and Peter ran from third to home and scored the first honorary run of the game prior to the national anthem.

“When they were running everyone in the stadium was standing and clapping. We got to meet members of the team and even, Governor Walz. It was amazing!” Amanda says. “What surprised me and what I didn’t expect is as we walked off the field, everyone near us in the section stood up and applauded Peter. It made his whole world. He left the field a hero that day.”

Peter, now 8 years old, is enjoying the summer with his family. He’s still looking out for (and occasionally antagonizing) his sister Katie. Most times, though, he’s just trying to make her laugh. 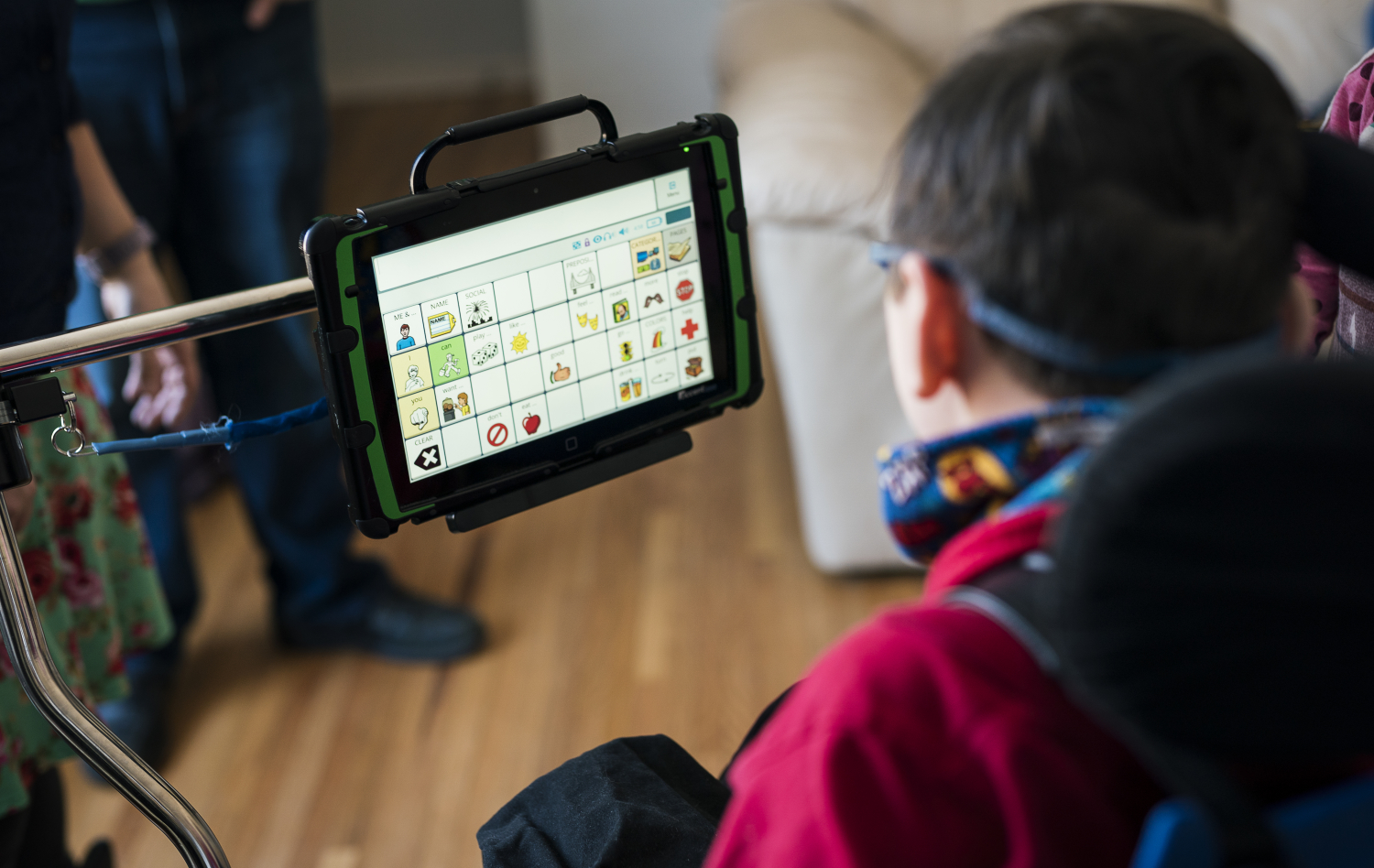 “Being able to communicate with one another seems so simple and it’s something I think we all take for granted,” Amanda says. “If COVID has taught us anything, it’s that the little things matter. Being able to ask Peter a question and get a definitive answer, even if it’s only one word, makes all the difference. Peter’s progress has and always will be a day-to-day process. Some days are better than others, but when we received Peter’s initial diagnosis of CP, the emphasis seemed to be grounded in all the things he wouldn’t be able to do. In our time at Gillette, we’ve never once felt that way. There, we met a group of people solely focused on all he could do. Since then, he’s already done many things we previously believed to be impossible. Peter won’t stop trying. He’s stubborn that way. We can’t wait to see what he does next!”

Peter still receives care at Gillette and has upcoming appointments in the next few months, along with an appointment with their now, good friend, Dr. Sinner.

“Most of the time at Gillette, we’re working with a patient population who have conditions for which there are no cures. You can look at that a number of ways,” Sinner says. “Here, we see hope.”

On Saturday, Sept. 12, Peter and his family will be participating in Gillette's Walk & Roll Family Fun Day. Join him by supporting the event with a donation or creating your own team today! 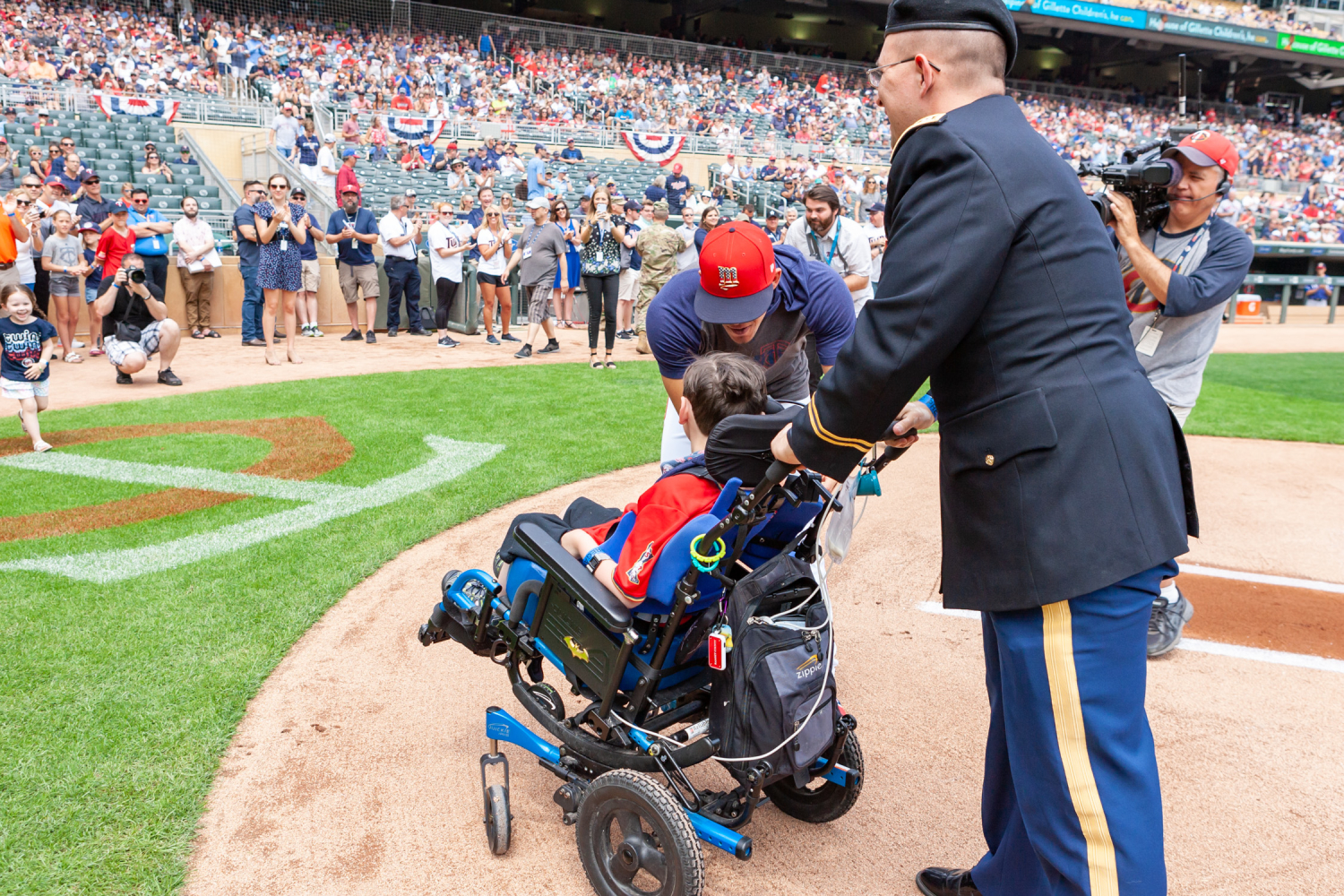 Peter, along with his dad Scott and Twins Starting Pitcher, Jose Berrios. Peter's sister, Katie (left) is running to congratulate him. It was a good day for all involved.

All photos were taken prior to COVID-19.

There are few moments in life as exciting and anxiety-inducing as the day you have your first child, but for Andrew Bailey and his wife, Amanda, things were a bit more complicated. Amanda was home in Connecticut getting ready for her baby shower. Andrew, a pitcher for the Boston Red Sox, was in Seattle for an away game.

Laney and Lilah are feisty, happy twin sisters. They share a diagnosis of cerebral palsy, but that is just one aspect of their lives. More importantly, they dance, they laugh and occasionally throw things.

Aaron Navarro is a teenager from Grandview, Texas. He's an active member of his high school debate team and runs 5K races (even though he’ll tell you that running isn’t his favorite thing). His mother, Christine, will tell you that the fact that he is running at all is nothing short of remarkable.