Are There Different Types Of Congenital Nevi?

A nevus is a well-defined malformation of the skin. Typically it is hyperpigmented (has extra color) and sometimes has dark hair. (More than one nevus is “nevi.”) The term congenital means the lesion is present at birth. Some nevi are not noticed at birth, but develop during infancy. These are often less than 1.5 cm in diameter and appear before 2 years of age. They are referred to as early onset nevi, and affect 6-20% of teenagers or adults. They are different than congenital nevi, and often fall into the category of birthmarks.

Some sources further define “giant” nevi as those lesions that:

About 80 percent of children with giant nevi have or develop “satellite” lesions. These smaller nevi can be found anywhere on the body. Measurements defining small to giant nevi are estimated numbers that we use to describe adult lesions. They’re based on what we estimate the nevi size to become with maturity. We scale down the size when we refer to neonates/infants.

How Often Do Nevi Occur And How Large Are They?

Giant nevi lesions typically occur in a “bathing trunk” formation, and are accompanied by satellite lesions. Giant nevi can also have areas that appear “lumpy” or uneven. These areas are usually painless, benign (non-cancerous) tumors within the nevus. Doctors might do biopsies of them or observe them for changes.

What Causes Nevi To Occur?

There really is nothing that causes congenital nevi. Nevi result from a localized overgrowth of melanin forming cells (the cells responsible for the pigmentation or color of skin). The diagram shows the different layers of skin. Nevi are classified by their appearance and location within these skin layers. 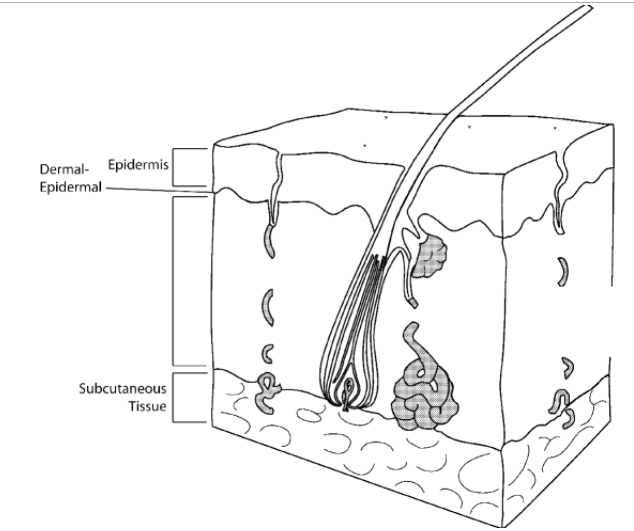 Common Types Of Nevi We See

When Should Nevi Be Removed?

Surgical options will be discussed when you consult with the surgeon. Individualized treatment plans are outlined based on each child’s need. Removal of small to medium- sized nevi is controversial, but some data suggests they can slightly increase the risk of skin cancer. For giant nevi, there’s increased incidence of serious melanomas later in life, so they should be removed.

How Are Nevi Removed?

Single excision: smaller nevi can be removed in one procedure. Typically, an elliptically shaped cut is made around the lesion. This allows the wound edges to come together in a straight line without any “puckered” edges. The length of the finished incision or scar will be approximately 3 times the transverse diameter (length) of the lesion. This is a same-day procedure.

Staged excision: nevi that are irregularly shaped or medium to large in size may require a staged procedure. The central aspect of the nevus is removed, using the same technique explained above. This incision is allowed to heal for 6-8 weeks. Then, another excision is made, removing more of the lesion. This is repeated until the lesion is completely removed. This is a same-day procedure that’s typically performed under general anesthesia.

Usually, an incision is made within the nevus itself to insert the expander. The expander is placed under the skin, in the area of healthy tissue adjacent to the nevus. At the time of insertion, the expander may or may not be injected with normal saline to begin the expansion. If the area of expansion is too tight, the first injection may be deferred until the follow-up appointment. This procedure is performed under general anesthesia and requires an overnight stay.

Will They Grow Back?

Nevi typically do not grow back unless they aren’t completely excised. A margin of several millimeters is made outside the visible edge of the nevus. The tissue is sent to pathology for evaluation. Occasionally, the pathology results indicate that a few nevus cells were present in the margin of tissue and will be reported as an incomplete excision. Pathology reports are usually available by the time your child returns to clinic for a post-op check. If the report indicates incomplete excision, your surgeon will discuss with you whether more surgery is needed. Depending on the type of nevus, children might need follow-up appointments.

Will The Nevus Be Checked For Malignancy?

Most nevi removed in children are benign. However, every time we remove a nevus of any type, we send it to pathology for examination. We report the results to you at the follow-up visit.