According to research published recently in the journal Pediatrics (and highlighted in national media) the number of trampoline park injuries has soared — no pun intended. The study’s authors estimate that the number of ER visits from trampoline injuries incurred at an indoor park rose from fewer than 600 in 2010 to nearly 7,000 in 2014. 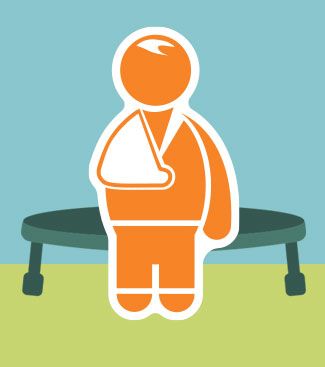 That news comes as no surprise to Stephen Sundberg, M.D., a veteran orthopedic surgeon at Gillette Children’s. Sundberg has been treating the aftermath of trampoline injuries—both those sustained using home trampolines and at trampoline parks—for his entire career.  In fact, trampoline injury prevention is a subject he’s long been passionate about. The best way to prevent a trampoline injury, according to Sundberg?   It’s simple—don’t use them.

“At Gillette I see more trampoline-related injuries than all the other summer-type injuries,” says Sundberg. “The injuries are potentially more severe and can include skull, spine and brain trauma. It's not just back yard trampolines that are dangerous. I see many injuries from children going to trampoline parks.”

Thinking that adding a net to a backyard trampoline will prevent injuries? Sundberg says to think again. “There's little evidence showing that trampoline nets reduce the rate of injury.”

Sundberg adds that indoor trampoline parks carry additional risk of injury. “The force with which children are bounced around, we see higher velocity injuries. more forceful injuries and more serious ones.”

For many children and families, summer means plenty of fun in the sun. Parents, however,…