Learning How to Swallow Pills

Home / Your Visit / Patient Education / Learning How to Swallow Pills


Many children and adults have difficulty swallowing pills. Sometimes you can crush a pill or take a liquid form of the medication, but there are times when you can’t. Follow these directions, and with practice, patience and perseverance, you’ll learn how to swallow pills more easily.

You need different sizes of sugar-based candies for practice “pills.” Cake Mate or Betty Crocker brand Decorating Decors, Wilton brand Sprinkles, and Tic Tac mints work well. In grocery stores, you can find Decorating Decors and Sprinkles in the cake-decorating section and Tic Tacs in the candy section or check-out lanes. These candies range from the size of a pin head to the size of a small pill.

Buy the Decorating Decors, Sprinkles and Tic Tac products listed below, from the smallest to largest candy “pill.”

If you can swallow water without difficulty, start a session with the most appropriate size candy “pill’ that you can comfortably swallow. Most children and adults find swallowing these balls surprisingly easy, so the first attempt is almost always a positive one.

Practice this procedure as many times as you need to:

After five consecutive successful attempts, move up to the next larger-sized candy pill. Practice swallowing the candy pill five times at each level.

What if I can’t swallow the pill five times in a row?

Continue the procedure using the same size candy pill—even if you have swallowed the candy four times in a row and then failed on the fifth try.

How long should each session take?

Sessions generally last 10 to 15 minutes. However, don’t prolong the session so long that it makes you anxious and not want to do it again.

What if I move up to a larger candy pill and can’t swallow it?

Return to the previous size pill before ending the session so you end the session with success.

What if I take a break and start a new session later?

In subsequent sessions, always begin with the smaller candy pill used at the first session. If you swallow it easily on the first attempt, move directly on to the next size, and so on. Some people are able move through all the sizes easily in one session. Other people might need more time and take anywhere from two to six sessions.

Finally, move from swallowing the candy pills to swallowing your actual medication. Most children who progress from the smallest candy pill through the Tic Tac can easily swallow medication.

This method allows your throat to automatically open, then triggers a natural urge to swallow. 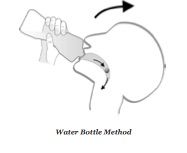 IMPORTANT: Do NOT use this method for capsules, because they float on water.

This method is generally recommended for swallowing capsules, especially if someone has difficultly swallowing.

This information is for educational purposes only. It is not intended to replace the advice of your health care providers. If you have any questions, talk with your doctor or others on your health care team. If you are a Gillette patient with urgent questions or concerns, please contact Telehealth Nursing at 651-229-3890.