How Is Craniosynostosis Treated?

If we determine that your child has prematurely fused cranial sutures, the craniofacial team will discuss the options for your child. Surgery is generally indicated because of the potential for increased intracranial pressure and compression on the brain, but in some circumstances, it may not be immediately necessary. For example, if the fusion occurs in only part of a suture and the CT scan does not indicate compression of the brain, the craniofacial team may recommend that the child be observed only, with close follow-up to rule out complete suture fusion.

The surgery is called cranial vault remodeling. The location of the surgery may be referred to as anterior (front of the head), posterior (back of the head) or total/near total (multiple areas of the head), depending on the suture(s) fused. Surgery done for the front of the head generally includes frontal bone advancement. Surgery in single-suture synostosis is done by 3–6 months of age at our center. For children with multiple suture synostosis, surgery is generally performed by 2–4 months of age.

Who Is On The Surgical Team?

After surgery, your child will have a large, turban-style dressing wrapped around the head. This dressing extends from the base of the head, over the ears, and across the forehead. The head of your child’s bed will be elevated to 30 degrees and will remain at this level until discharge. This is to aid drainage from the surgical site and to decrease any swelling.

You may see one or two small tubes, about the size of a drinking straw, on each side of the head. They come out underneath the dressing behind the ears. These long tubes are drains. At the end of them is a large bulb where drainage collects from the surgical wound. These drains help release the fluid from the area, aid with the healing process and help to prevent fluid from collecting in the tissues.

Even with the drains, there will be a significant amount of fluid that collects around the face and eyes. You may hear this referred to as “edema.”

Edema is a very normal response to a procedure such as surgery. The body senses that the skin and tissues have been disrupted, and it sends specialized blood cells to repair them. Your child will most likely have some swelling immediately after surgery. This is very normal and expected. Most children are unable to open their eyes, especially if the remodeling was to the front of the head. The swelling peaks at about the second day after surgery, then gradually lessen. The eyes are usually open when the child is discharged from the hospital. Bruising, which also may accompany the swelling, will diminish over the first postoperative week.

Other tubes and drains are put in place after your child goes to sleep in the operating room. They include:

The bedside nurses can show you where the tubes and drains are located. They also will help assess your child’s need for pain medication.

What Can I Do To Help My Child After Surgery?

You will be allowed to be with your child in the Pediatric Intensive Care Unit (PICU) and inpatient units after surgery. One parent can arrange to sleep in the hospital with your child. Visiting policies will be reviewed with you during the pre-op tour and when your child is admitted. It is very important for you to get rest so that you can support your child during recovery. You and a support person may want to take turns sleeping with your child while at the hospital.

You can support your child with quiet talk, singing and touch. You also can bring a favorite toy from home, such as a stuffed animal or a familiar rattle or squeaky toy. You know best how to soothe your child. When your child’s eyes are closed, hearing your voice and feeling your presence through touch and smell will provide comfort.

How Long Will My Child Be In The Hospital?

After recovery in the PACU, your child will be transferred to the PICU for the first postoperative night. A pediatric intensivist — a physician who is board-certified in pediatric intensive care of children — manages overnight care. The following morning, a member of the craniofacial team will be in to examine your child. The turban dress-ing and the drains will be checked for the amount and type of drainage present. These drains are removed, if present, on the second postoperative day.

By this time, your child may be starting to move around more, and the urinary catheter can be removed. The radial arterial line will also be discontinued as your child’s status stabilizes, and blood pressure can be monitored with an arm cuff. The intravenous (IV) catheter stays in until your child is almost ready to leave the hospital. IV fluids, antibiotics and other medications will continue to be given through this line.

Your child will be transferred to a general medical-surgical floor on the first postoperative day, usually by mid-afternoon. There, we’ll gradually advance oral feedings as tolerated, until your child resumes normal feeding. Initially, we’ll give your child Pedialyte, advancing as tolerated to half-strength and, finally, to full-strength formula or breast milk and solids (as appropriate for age). As oral feedings are advanced, the amount of IV fluid is decreased. Children having this procedure are usually in the hospital for a total of three to four days.

Will My Child Be In Pain?

The remodeling procedure is tolerated well by most children with minimal discomfort. Older children having this procedure do not typically complain of pain. However, every individual has a different level of pain tolerance. Therefore, pain medications are available to treat any pain your child may experience postoperatively.

Narcotics are ordered to provide comfort for any irritability or pain that your child may experience in the first 24 to 36 hours after surgery. The appropriate frequency and dose is ordered according to your child’s weight and age. There is no risk of dependency to Morphine, as it is given to manage pain on a short-term basis. Other medications ordered for pain are acetaminophen (Tylenol), which can be given by mouth or by rectal suppository; oxycodone, which is generally given once your child is able to tolerate oral feedings; and ibuprofen (Motrin or Advil).

Every child is different with regard to pain and tolerance to procedures. Your child will be regularly assessed for signs/symptoms of pain by the bedside nurse, and given medication as needed. A prescription medication for pain will be sent home with you, along with instructions for pain management after discharge. Most children do just fine with over-the-counter pain medications such as acetaminophen and ibuprofen.

What Other Medication Will My Child Receive?

Children having cranial vault remodeling will be given IV antibiotics to protect against infection. Medications are given for postoperative nausea and vomiting through the first night after surgery, and to control upset stomach until your child resumes oral feedings.

What Happens After Discharge?

You will be scheduled for a follow-up appointment with the craniofacial surgeon and neurosurgeon three weeks after discharge. After that, your child will be seen again in 3 months and then yearly until discharged from our care.

Is Support Available For Families Of Children With Craniosynostosis?

Here at Gillette, our child life team is available for pre-operative tours of our facility. They will show you where your child will be pre- and postoperatively, and they’ll explain what to expect during your stay in the hospital. We find that it is very beneficial to parents, and we highly recommend it to our families.

Additionally, we have a support system called “Parent-to-Parent.” The program connects families of children who have newly diagnosed craniosynostosis to parents whose children have gone through the same surgery.

When there is premature fusion, each suture is associated with a specific abnormal head shape. These head shapes have been given specific names. You may hear members of the craniofacial team use these terms when referring to your child.

Sagittal synostosis is the most common type of craniosynostosis. It is caused by the fusion of the sagittal suture. Common characteristics include a long head that is narrow from front to back and ear to ear. The head appears boat-shaped and is termed scaphocephaly. 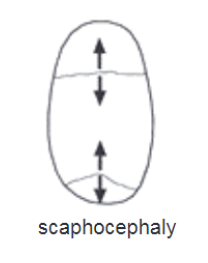 Metopic synostosis is the fusion of the metopic suture. Characteristics range from a bony ridge down the middle of the forehead, to a keel-shaped or triangular appearance of the forehead, with eyes that are closer together than usual. This head shape is called trigonocephaly. 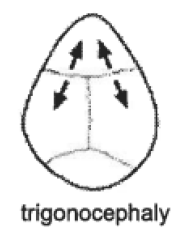 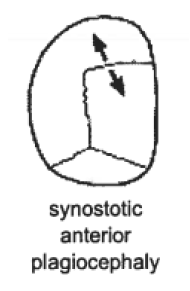 When both of the coronal sutures are fused (bilateral coronal synostosis), the upper forehead protrudes, there is a flattening to the back of the skull, and the bones around the eyes are underdeveloped. This produces a shortened appearance of the skull from front to back, and a widening from side to side. This shape is termed brachycephaly. Most children with this condition also have a progressively tall, towering head which is termed turricephaly (not pictured). 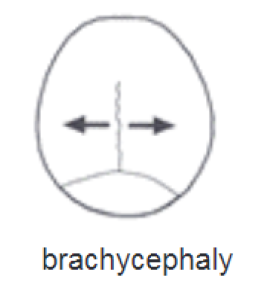 Synostotic posterior plagiocephaly must be distinguished from deformational plagiocephaly, which is the most frequent cause for flattening of one side of the back of the head.

Unlike abnormal head shape caused by premature closure of the sutures, external forces on the skull cause deformational plagiocephaly. The condition can result from crowding in the uterus due to multiple fetuses, large infant size, a small pelvis in the mother, or a breech presentation. It is also associated with a condition known as torticollis, which restricts range of motion of the neck and causes the infant to favor lying on one side of the head. As infants are placed, as recommended, on their backs to sleep, they favor turning toward the unaffected side, causing pressure that can contribute to flattening.