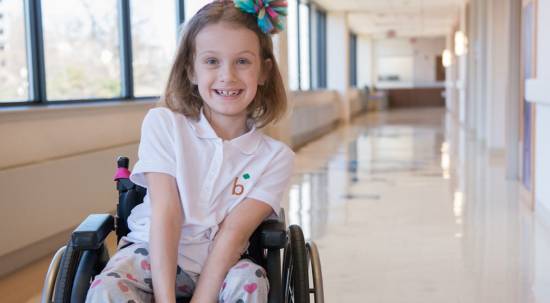 What Is Spina Bifida?

Spina bifida is a group of congenital disabilities (a disability that is present at birth) that affects the spine. A baby who has the most severe form of spina bifida will be born with part of the spinal cord outside the body. Mild spina bifida might not cause symptoms.

Spina bifida happens during the first trimester of pregnancy, when the structure that eventually becomes a baby’s spinal cord (the neural tube) doesn’t develop properly.

One in approximately every 1,500 babies is born with some form of spina bifida.

Children who have spina bifida will likely have one of two main types.

Myelomeningocele is one of the more severe forms of spina bifida, also called open spina bifida or an open neural tube defect. In this common malformation, the neural tube stops developing earlier than normal. Babies born with myelomeningocele have a sac containing an abnormally formed spinal cord that pushes out from an opening in the spinal column of the back.

The nerves at and below the affected area often are damaged or completely absent, causing weakness or paralysis, along with bowel and bladder complications. Babies need surgery shortly after birth to repair the affected area, prevent further injury and avoid infection. Children who have spina bifida, especially those who have myelomeningocele, commonly also develop hydrocephalus, or “water on the brain.” Hydrocephalus might also require surgery management.

Although nothing can reverse the nerve injury, treatments can help children who have myelomeningocele live as fully and independently as possible.

Spina bifida occulta is another group of spine malformations. In this group, lesions on the spine are covered with skin and the underlying spinal cord abnormality may be difficult to diagnose. The term “occulta” refers to the fact that these lesions may indeed be “hidden” and are not found until later in life. However, the function of the spinal cord is often normal. Sometimes a dimple, hair patch or red discoloration will appear on the skin over the affected area. Sometimes the condition is diagnosed because a child has a variety of lower extremity or bowel/bladder difficulties. The specific spinal cord lesions are quite variable, and include the spinal lipoma (lipomyelomeningocele), the split spinal cord, dermal sinus tract and simple tethered cord (also called short filum, fat filum or filum lipoma).

Babies born with spina bifida occulta often have normal function at birth. Sometimes, however, they experience problems later on, such as tethered spinal cord syndrome.

Spina bifida occulta is commonly used to describe a small opening in the back part of the spine, which can be seen on X-rays. This is a common occurrence (approximately 5 percent of the population) and isn’t associated with any other abnormality of the spinal cord. A pediatric neurosurgeon can help diagnosis this condition.

A common question about the cause of spina bifida is, “Is spina bifida genetic?” Although exact spina bifida causes are unknown, the condition could be the result of a combination of genetic and environmental factors.

The complications leading to open spina bifida occur in the first trimester of pregnancy, often before a woman knows she’s pregnant. Women old enough to have children should talk to their doctors about taking 400 micrograms of folic acid daily. Folic acid is a B vitamin shown to significantly decrease the chances of a woman having a baby who has spina bifida.

The other forms of spina bifida are not associated with folic acid deficiency. Some forms occur is specific syndromes involving the baby’s development, but most cases are completely random.