Gillette neurologist Randal Richardson, MD, is a leader in SMA research and treatment.

Photos taken before the COVID-19 pandemic.

“The main message I want to get out to people who have SMA and their families is—many of you now have options and the power to make a choice for yourself,” Richardson says.

SMA is a rare and often fatal genetic disease affecting muscle strength and movement. It gradually takes away a child’s physical strength and is the second most common autosomal recessive (genetic) cause of infant death, affecting approximately 1 in 6,000 to 12,000 infants annually.

A new drug to treat SMA

On August 8, 2020 the FDA approved Evrysdi (risdiplam) as a new drug to treat SMA patients who are two months of age and older. This drug can be taken orally at home and does not require a doctor’s visit for administration. Two other recently approved SMA treatments, Spinraza ™ and Zolgensma, involve spinal infusions or intravenous infusions by a medical professional.

Even before FDA approval, Richardson and his team at Gillette created an Expanded Access Program (EAP) to treat candidate patients with the then experimental drug, risdiplam. Richardson describes expanded access programs as the modern-day legalized equivalent of “The Dallas Buyer’s Clubs.”  This refers to a group of people in the 1980s who banded together to buy what were then experimental drugs, such as AZT, to treat HIV/AIDS.

The intent of the EAP is to allow patients access to experimental drugs prior to FDA approval, when no alternative treatments are available. This allowed patients with SMA who could not receive Spinraza or Zolgensma due to age, difficult spinal access, procedural discomfort, or COVID-19-related procedural restrictions to obtain risdiplam. This is particularly salient as SMA is regarded as a disease group regarded to be at high risk for COVID-19 complications.

As part of a clinic trial, Randal Richardson, MD, examines the muscle tone of a SMA patient.

Richardson is particularly devoted to the SMA patient population. He and the Gillette team have been part of the EAP programs utilizing the other two established SMA treatments - Spinraza and Zolgensma. Richardson and Gillette Children's Specialty Healthcare were also engaged in early and ongoing clinical trials of Spinraza. Gillette is in the Cure SMA Care Center Network and is active in maintaining and enhancing the Cure SMA Clinical Data Registry, which is hoped to evolve to maximize both medical and supportive therapies for SMA.

Gillette is an important center for SMA care

For the expanded access program (EAP) Richardson enrolled six patients with SMA Types 1 and 2 who ranged in age from 15 months to 33 years in the risdiplam expanded access program. The group included patients from Minnesota as well as North and South Dakota. With the COVID-19 pandemic ongoing, extreme measures were sometimes required, particularly given travel precautions for high risk patients. Virtual visits were utilized in concert with visits to local doctors for examination and labs. For one subject, Dr. Richardson and his research assistant, Heather Wendorf, actually made a house call.

“We’ve only been treating patients with risdiplam for a few months but the early clinical trial data on risdiplam is promising, which likely explains why the drug was fast tracked and approved quickly. Rapid FDA approval is somewhat bittersweet as the peer-reviewed papers, which will provide an even more detailed assessment of efficacy, are yet to be released,” Richardson says.

SMA type 1, also called Werdnig-Hoffman disease, is unfortunately the most common type of SMA. Patients with SMA Type 1 exhibit symptoms at birth or by age six months. These children exhibit floppy limbs, weak trunk movement and a limited ability to move or breathe on their own. SMA Type 2 typically is seen in children between 6 and 18 months of age. Children with type 2 might sit without support at some point but can’t walk on their own. Individuals with SMA type 3 have ability to walk but may lose this ability over time. 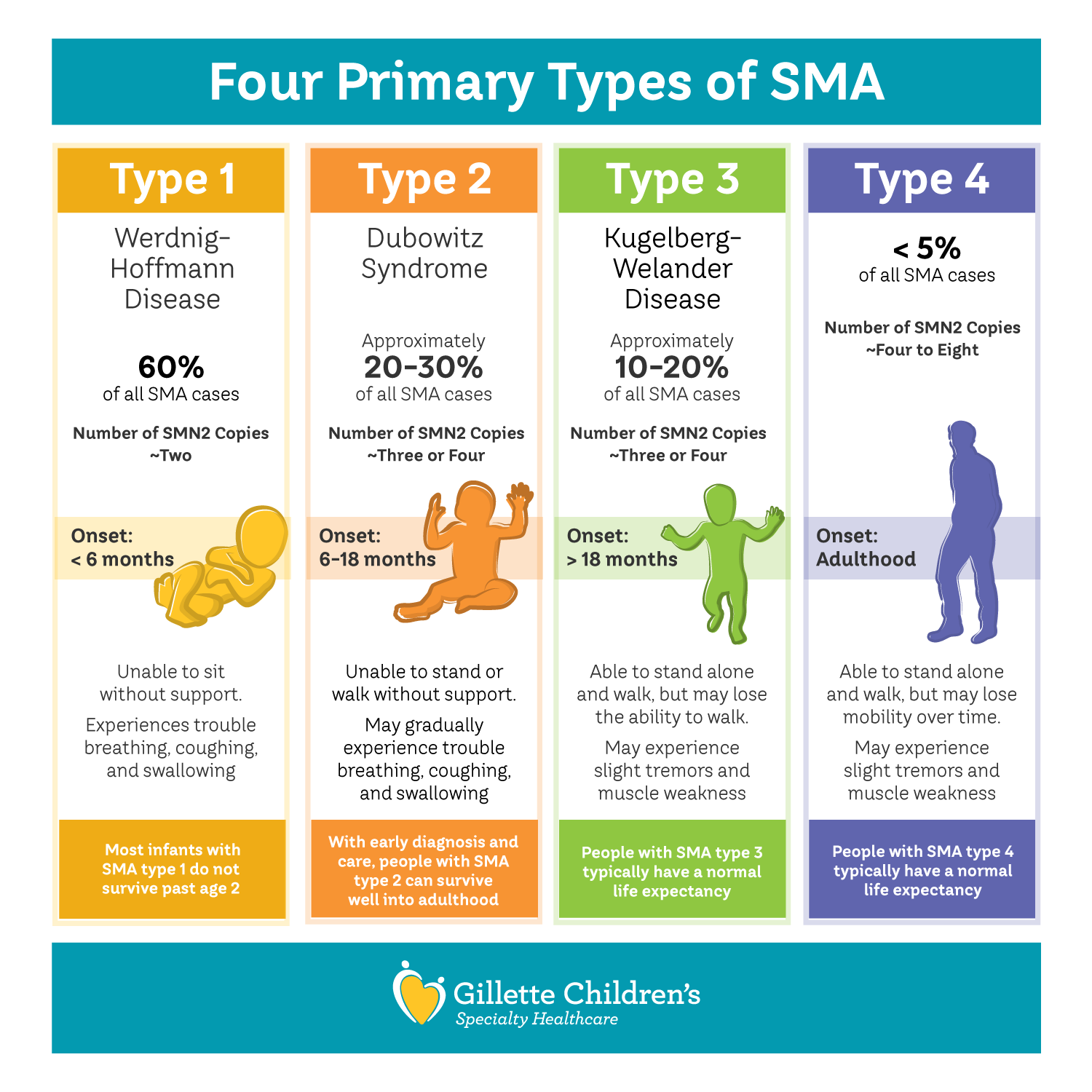 Gillette is on the forefront of SMA breakthroughs

Richardson and Gillette are on the forefront of helping with SMA drug breakthroughs. In March 2016 Gillette was a leading center in the clinical trials of Spinraza which is commonly known as the first real treatment for SMA. At the time, Richardson characterized his work with helping to develop Spinraza as “Probably the most important project of my life. It’s one of the most important things I’ll ever be involved with.”

The New York Times quoted medical experts in 2016 who called the discovery of Spinraza a ‘life-changing event’ that would ‘change the course of the disease.’ With a list price of $125,000 for one dose of Spinraza the Times also claimed it to be “among the most expensive drugs in the world.”

Biogen manufactures Spinraza, which has a list price of $750,000 for the first year of treatment and about $375,000 annually in subsequent years.

Richardson and his team worked to help Gillette patients navigate the insurance issues involved with getting coverage for the drug. Gillette has no involvement in, or influence over the price drug companies set for Spinraza or any other SMA drug treatment.

Spinraza treatment requires patients to get a series of ‘loading doses’ of the drug via a lumbar puncture (spinal tap). After those first loading doses, patients get three lumbar punctures of Spinraza a year—and continue to receive the drug in such a manner for the foreseeable future.

Gillette works with the MDH to start newborn screening for SMA

In March 2018 Gillette was instrumental in another important advancement to help children born with SMA. At the urging of Gillette and other health care providers, the Minnesota Department of Health began SMA screening for all babies born in Minnesota. Approximately 95% of patients with SMA will be recognized by Minnesota newborn screening. Minnesota was among the first states in the U.S. to screen for SMA. This is an important development because motor nerve loss from SMA is not reversible with treatment, only preventable with treatment. So the sooner a child is diagnosed and treated, the less damage there is from SMA.

At a 2018 press conference at Gillette headquarters in St. Paul announcing the screening requirement Minnesota Health Commissioner, Jan Malcom, said, “Adding SMA to the state’s newborn screening panel is an important move that will help save families from the heartbreak of losing a child or losing precious time when treating their child could result in better outcomes.”

In May 2019 the FDA approved Zolgensma (onasemnogene abeparvovec-xioi) as the first gene transfer therapy approved to treat children less than 2-years-old with SMA.

Zolgensma alters the underlying genetic cause of SMA and may permanently stop the progression of the disease. In 2019 the initial price for Zolgensma was about $2.1 million and, according to the New York Times, was believed to be the highest price ever for a one-time treatment. Novartis manufactures Zolgensma, which is currently the most popular treatment for children under the age of two.

SMA families are informed and active

“I continue to be surprised by where we are now in terms of helping patients who have SMA,” Richardson says. “A mere four years ago we really did not have much hope to offer families who had children diagnosed with SMA. Now we have three very good and very different drug options.”

Richardson says two minutes after he received first notification of the FDA approved Evrysdi (risdiplam); he started receiving emails from his SMA patients and families asking about the drug. “These families are really plugged in and are active in CureSMA,” he says.

“I would tell families the future is bright for people who have SMA,” Richardson says. “Because of these new developments it’s actually more challenging for these families in some ways. Families really have to build a relationship with their provider and have some in-depth discussions about what is the best treatment option for themselves or their child. At Gillette, we look forward to helping families navigate these options.”

Richardson expects that once more long term research is done on these newly developed SMA treatments, combination therapy will be an option for patients.

“The truth is we’re in the early stages of SMA treatment. We don’t have a good idea what might be beneficial for patients as they live longer,” Richardson says. “For example the effects of Evrysdi  (risdiplam) on other tissues in the body could be additionally beneficial in those receiving Spinraza. It’s truly an exciting time to be in this field.”

Anna Hendricksen held her breath and spent hours in suspended hope as pediatric neurologist Randal Richardson, MD, and his team assessed her daughter, Annika, to determine if she met the criteria to participate in the clinical trial for Spinraza ™, also called nusinersen, a drug to treat spinal muscular atrophy (SMA).

Gillette Children's Specialty Healthcare is playing a key role in the clinical trials and research into the drug Spinraza, also called nusinersen.The drug is being celebrated as the first real hope for people who have spinal muscular atrophy (SMA).

All babies born in Minnesota are now being screened for spinal muscular atrophy (SMA) unless their parents opt out of the newborn screening, the Minnesota Department of Health recently announced. SMA is the leading genetic cause of early childhood death in the United States.
Show Results