Gillette Children's is proud to mark Children's Miracle Network Hospitals (CMN) week and the selection of one of our patients, Ruth-Evelyn Pranke, to be recognized as a "national champion" to represent Gillette.

According to the CMN website, more than 10 million children enter a children's hospital like Gillette across North America every year. Since 1983, Children's Miracle Network Hospitals help to cover gaps in funding and raise awareness about providing quality care and compassion for children.

Ruth-Evelyn (RE) and her parents, Corey and Karlyn Pranke, are among 11 families recognized by CMN for their perseverance and dedication. This honor is the perfect opportunity to re-introduce you to the Pranke family and to highlight how the team at Gillette Children's worked to help RE live a full and fun life. 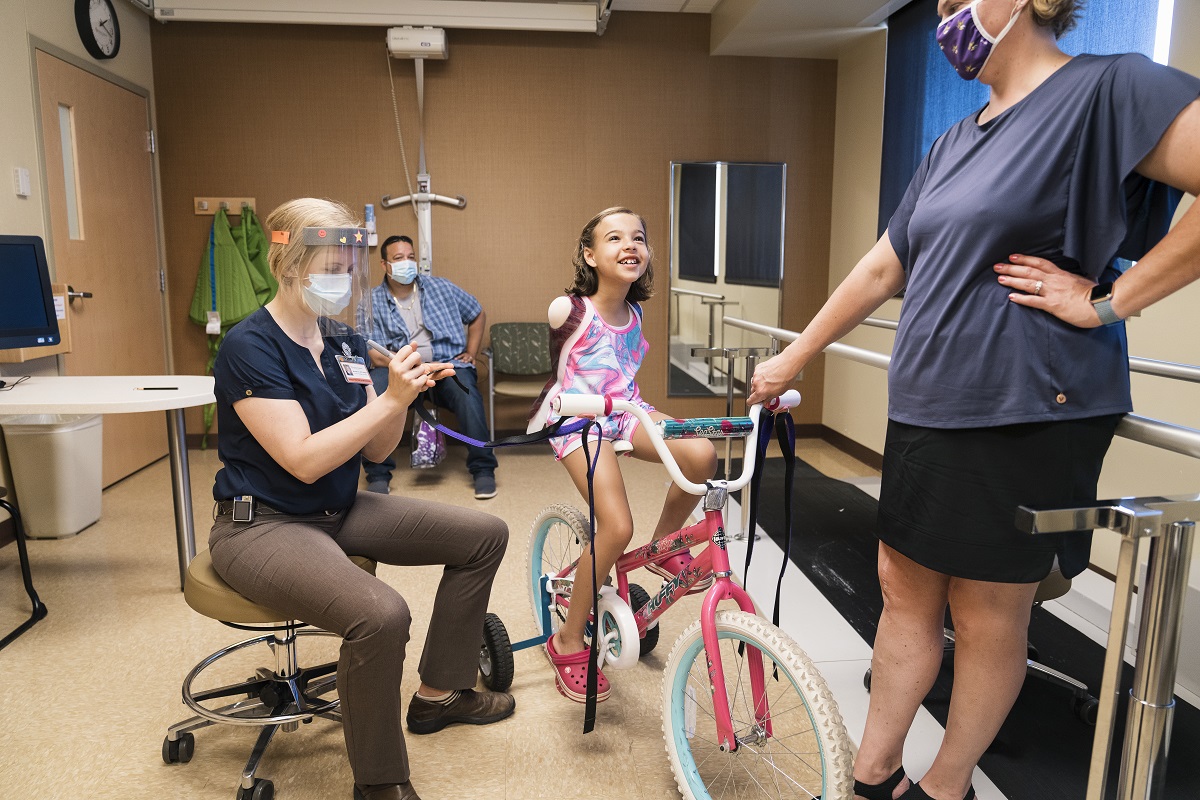 It has been about five years since Ruth Evelyn (RE) took her first spin on her bike, and she continues to work with her prosthetist at Gillette to ensure a perfect fit as she grows. When she isn't biking, RE, now 10 years old, loves swimming, clog dancing, and skiing—she's even mastered the black diamond slopes!

Although some of her interests have changed, a few things have stayed the same: RE is still a ball of energy, she still doesn't have "can't" in her vocabulary, and she's still an enthusiastic advocate for Gillette's mission. 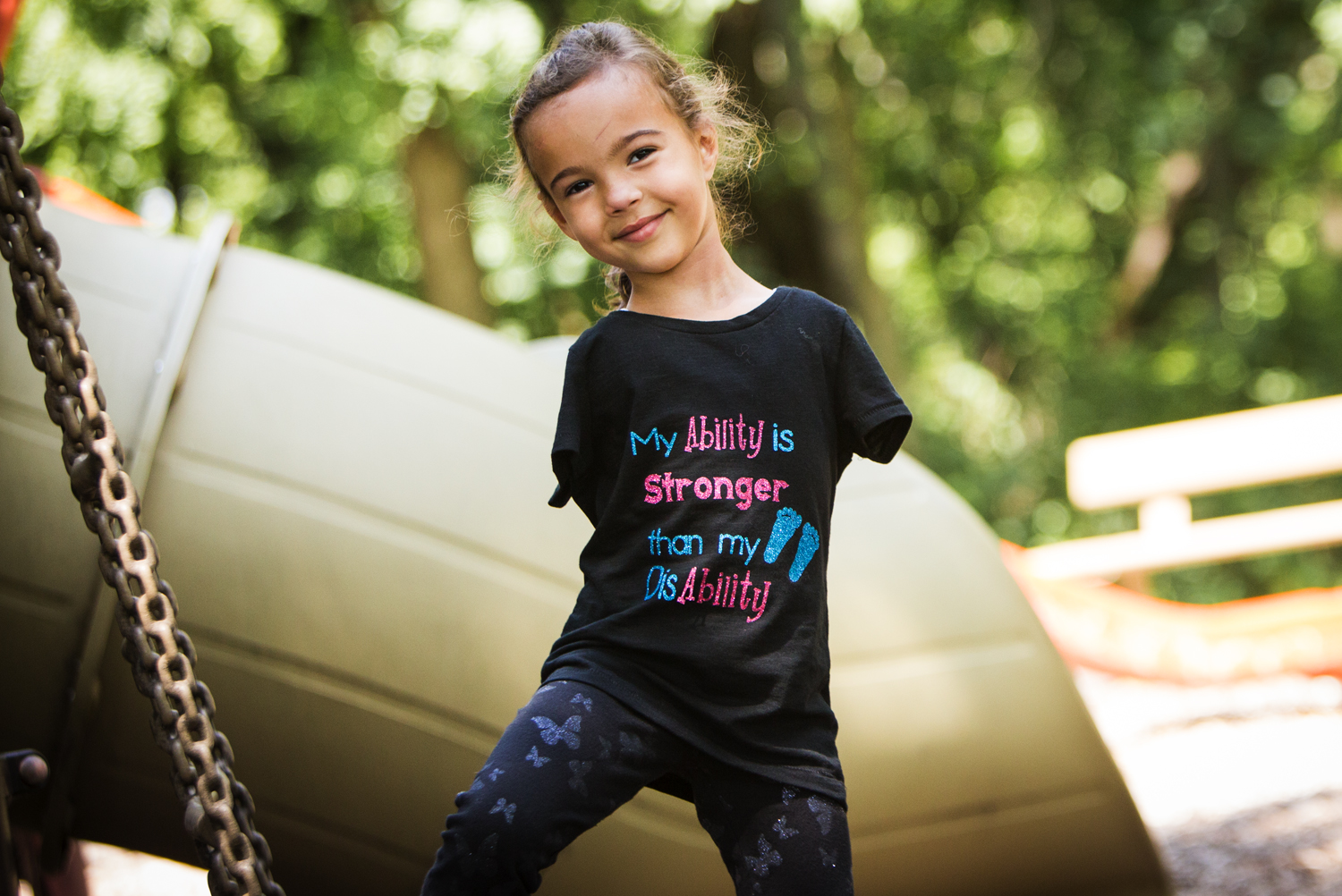 Ruth-Evelyn (you can call her “RE” for short) is 5 years old and a ball of energy.  She loves roller coasters, dancing, gymnastics, Disney princesses and coloring. On a sunny August afternoon, RE shrieks with delight as she flies, fearless, down the slides at her neighborhood park.

You might have noticed something else about RE, too. RE was born missing her arms. Meet her, and you’ll see that she’s adapted remarkably. She makes iPad videos, eats her meals, gives high-fives and creates artwork—all using her feet.

But there’s one thing RE hadn’t done yet.  She dreamed of riding a two-wheel bike.

RE’s mom, Karlyn Pranke, is a firm believer that anything’s possible for her daughter. She says that RE’s been defying the odds since her birth on April 19, 2012, a full nine weeks ahead of her due date. “There’s no ‘can’t’ in her vocabulary,” says Karlyn. “She wants to ride a bike, so we’ll figure out a way that she can.”

So, RE’s family turned to Gillette Children’s, where RE’s received care since age 1. Her prosthetist, Michelle Hall, got right to work.

The result? A custom-made device that rests against RE’s shoulders and connects to her bicycle’s handlebars, helping her steer safely and confidently. It’s purple, and features images of a ballerina and a dolphin—all per RE’s request.

Before RE brought her new device home, there was an important stop to make: Walmart, where Karlyn purchased her daughter a hot-pink bike, as girly as can be, and a pink helmet to match. Then, it was on to Gillette for a final fitting and adjustments with Michelle.

Later that day, RE and Karlyn pulled into the parking lot of Wentworth Park in Mendota Heights, Minnesota, near their home. Karlyn strapped on RE’s helmet and fastened the device to her daughter’s chest and bicycle. She cautioned her to go slow, as any right-minded parent would do.

Any parent. Any kid. Today, here at the park, they are exactly that—just as it should be. “I want her to be as typical as anybody else,” says Karlyn. I want to make it as easy as it can be, but challenge her a bit too. She’s one of those perfectionist kids.”

RE’s concentrating hard, but her exclamation to her mom says it all: “I’m getting the hang of it!” 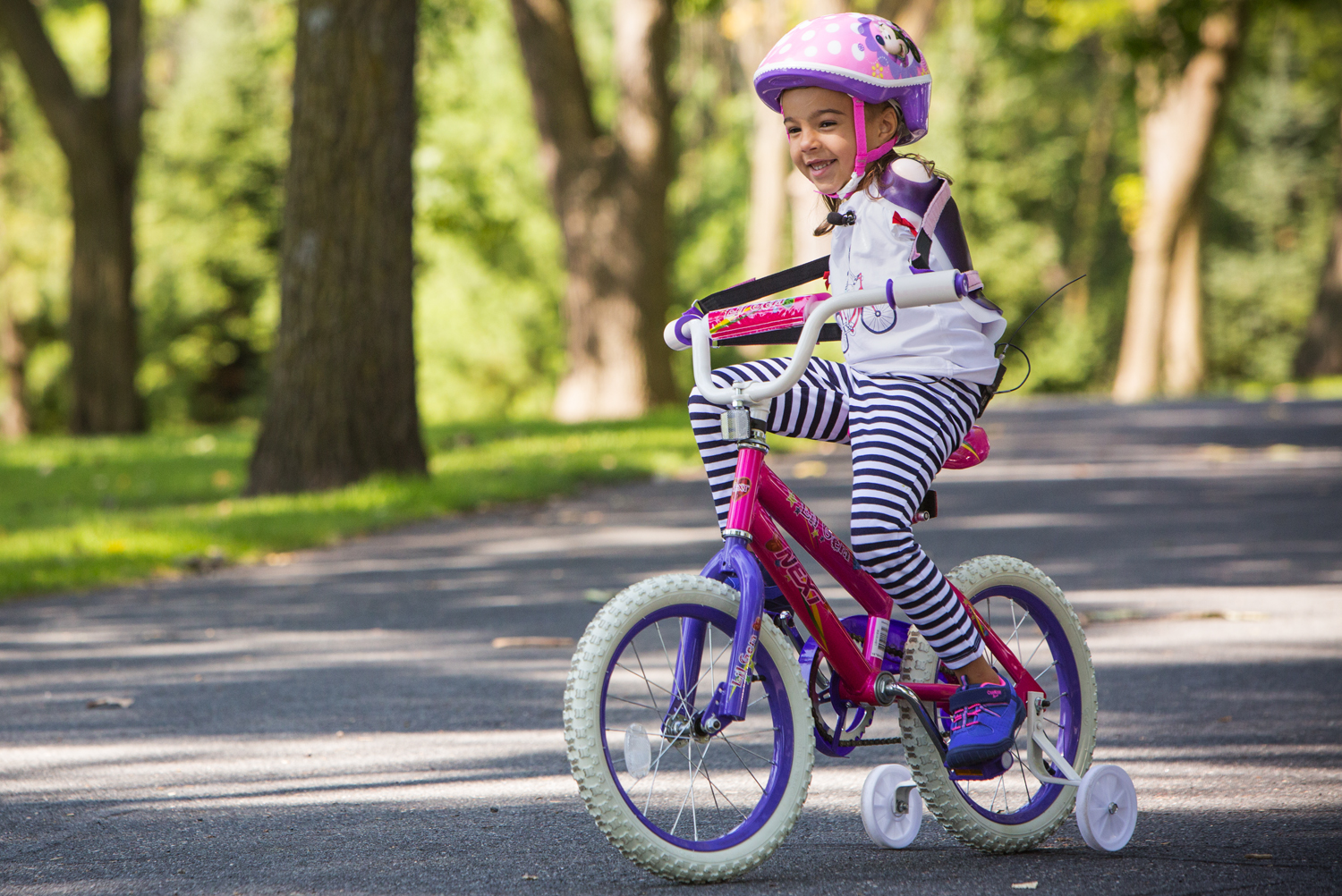 When Isabella Gregory, 11, received a diagnosis of juvenile idiopathic scoliosis in 2019, it was…

Most parents would tell you that having a child changes your life in ways you never could have imagined. That certainly was the case for my husband, Mike and me. Our daughter, Peyton, is now 9 years old, and it’s been a journey of hope, faith and love.

Figuring out if your child has a rare disease is a concerning and challenging puzzle for parents.Two members of the Gillette team, pediatric neurologists Randal Richardson, MD, and Jamie Eskuri, MD, say finding answers and guiding families through a rare disease diagnosis and care plan is one of the most rewarding parts of their jobs.

When Isabella Gregory, 11, received a diagnosis of juvenile idiopathic scoliosis in 2019, it was a shock to say the least. Read about the unique surgical procedure that got Isabella back to her life and activities just 6 weeks later.