A Legacy of Strength and Smiles

Lyn Baier knows what it’s like to deal with a challenge. As a math teacher she’s devoted herself to helping students reach their highest potential and to take on complex problems.

“Giving children the confidence to try new things and push themselves is part of my teaching philosophy,” Baier says. “It’s also part of what I learned when I was a patient at Gillette Children’s in the 1940s. “ 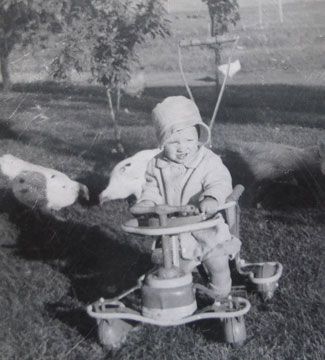 Baier was born in July 1941 with a deformity to her right leg. Her kneecap was flattened, her ankle didn’t bend and her shortened leg was about six inches from touching the ground. “My parents were German immigrants who settled on a small Pipestone county farm in southwestern Minnesota with their five children,” Baier says. “When I was born with my leg issue they didn’t know what to do. Gillette gave them hope.”

As a child, Baier and her mother traveled by bus to the old Gillette building near Lake Phalen in St. Paul, Minnesota. Her doctor, Wallace Cole, decided to treat her with a series of braces. Baier spent months at Gillette away from her family and friends while her new braces were being made and fitted.

“The atmosphere at Gillette was so supportive,” Baier marvels.” You would think being away from my family as a child would be a sad time in my life—but it wasn’t. The other Gillette patients helped me to reject pity and overcome challenges with strength and a smile.”

Baier thrived after her treatments at Gillette. “The Gillette staff and my family helped me believe I could do anything I wanted to do,” Baier adds. She studied hard and graduated from her small high school when she was only 16. She was preparing to go to Mankato State University when she had to make one of the most difficult decisions of her life—whether to have her right leg amputated. 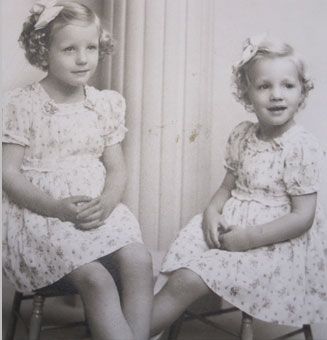 “Dr. Cole tried to convince me that I would have a better quality of life if my problem leg was amputated and I used a prosthetic leg.  I disagreed and told him I thought I was getting along fine with my braces,” Baier recalls.

To make his case, Cole took her to visit a company making prosthetic legs to show her how they functioned and looked better than her current leg. “That did it,” Baier says, “I had to agree the legs did look so much better and would help me stay active.”

On July 18, 1958—the day after her 17th birthday—Baier had her right leg amputated. “I will be forever grateful to my wonderful doctor. He changed my life!” Baier exclaims.

Baier spent three months at Gillette recovering  from the amputation and learning how to use her new leg. “There were so many fun girls on my ward,” Baier says. “We all helped each other. We taught each other how to deal with the pain and set goals for the future.” 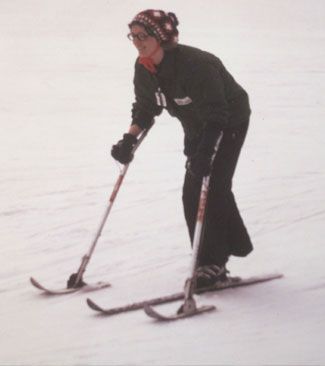 For Baier the future included graduating from college and earning two Masters degrees. She taught math for more than 35 years and retired from Hopkins West Junior High School in 1998. She spent the next few years teaching at-risk students at the Hennepin County Home School, Wayzata High School and at Intermediate District 287. She opened her own math tutoring company in Minnetonka in 2013.

“My passion is teaching. I try to encourage my students to believe that ‘they can!’ That’s the same message Gillette instilled in me.” 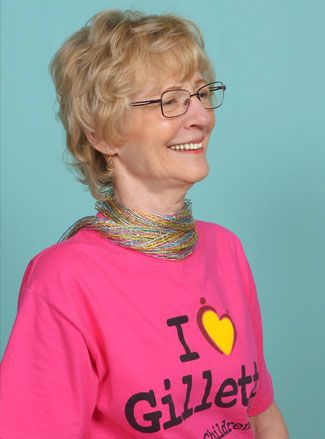 Her time at Gillette made such an impact on Baier that she and her husband decided to include Gillette in their estate plans. “Gillette played a big role in helping me physically,” Baier says, “but more importantly, Gillette played a huge role in my becoming a happy, responsible, confident person.”

Photos: (1) Lyn Baier with chickens on her family farm in southwestern Minnesota's Pipestone county. (2) Baier (on the right) and her older sister pose in their best dresses. (3) Baier likes to stay active and has spent time participating in adaptive downhill skiing. (4) Lyn Baier proudly wears her new Gillette T-shirt.

Make a difference in the lives of Gillette kids today by donating.

Gillette hosted its 7th Annual Adaptive Ski Day for its patients and their families. Event…