“It looked a lot like scanning groceries!” remarks Amanda Morcomb about the process of fitting her twins, Teagan and Orion, for their Gillette CranioCap® orthoses. Morcomb describes the entire treatment process as a smooth one—just a small bump in the road. The babies, born early at 34 weeks, celebrated their first birthday on the Fourth of July. 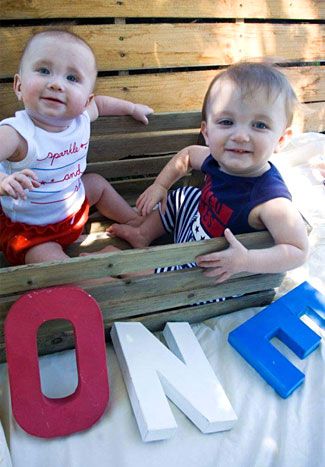 Getting Back on Track
Teagan and Orion were 5 months old when Morcomb and her husband first noticed flat spots on their heads. An appointment with Gillette's craniofacial team confirmed a diagnosis of deformational plagiocephaly (also called flat head syndrome).

“I had heard great things about Gillette,” says Morcomb. “I knew it was the right place to get them back on track.”

Specialists also diagnosed Orion with torticollis, a tightening of the neck muscle often associated with plagiocephaly. A retrospective study of more than 10,000 patients seen at Gillette between 1999 and 2016 found that 62 percent of children had both diagnoses.

Smooth Process for Babies, Families
Soon after their appointment, Teagan and Orion returned for their Gillette CranioCap® orthosis fittings. A technician scanned their heads using special laser technology. Then, a 3D printer—the hospital’s first, purchased in 2015—created models of each baby’s unique head shape. Because the technology reduces turnaround time, the twins received and began wearing their caps sooner. 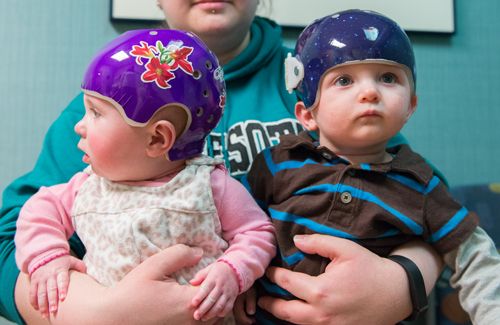 Teagan and Orion wore their caps 23 hours a day, returning to Gillette for evaluations and adjustments every other week. Those adjustments were needed, says Morcomb, because “they grow fast!” The caps soon became routine for the twins. So did the family’s Gillette appointments. “The check-ins were quick—just an adjustment here or there. Everyone at Gillette was professional and kind,” says Morcomb.

Close fitting in some areas and open in others, the Gillette CranioCap orthosis® rounds babies’ heads gradually as their brains and skulls grow. The entire process took two months for Orion and several weeks less for Teagan. Orion’s torticollis also resolved with regular physical therapy.

When Art Meets Science
Gary Kroll, manager of Orthotics, Prosthetics and Seating at Gillette, says the introduction of 3D printing does more than streamline production time. It means staff can precisely design each Gillette CranioCap® orthosis and better simulate changes.

“Ultimately, we can produce a cap that’s ideally suited to the specific needs of each patient,” says Kroll. “The process in the past was much more of an art, but the printer allows us to blend that art with very specific science.”

As Morcomb reflects on her babies’ first year of life, she says there is much to celebrate. “Even though we’ve had a couple of stumbling blocks along 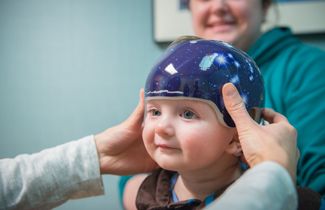 the way, we’ve made it to a good place today,” she says with pride.