Brock is “Unstoppable” After Rhizotomy Surgery

With spiked hair, colorful glasses and a knack for telling jokes, Brock Sandahl is as cool a kid as they come. Tooling down the Gillette skyway, the outgoing 4-year-old will tell you about how he learned to drive a wheelchair (YouTube), how much he loves preschool (a lot!) and why six is afraid of seven (because seven ate nine). 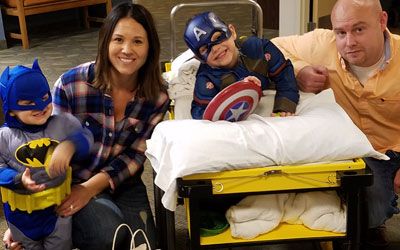 His mom, Mandy Sandahl, says she and her husband, Brent Sandahl, felt confident selecting Gillette for Brock’s surgery. “Within our first hour there, we knew it was the right place. It’s something you walk in and feel.”  Additional reassurance came with the knowledge that not just one, but all Gillette neurosurgeons were skilled in performing the procedure.

After rhizotomy surgery, children like Brock undergo six weeks of inpatient rehabilitation therapy. They first spend several weeks using something called a prone cart during the time they’re not in therapy sessions. Lying flat on the stomach (also called a “prone” position) can contribute to good surgical outcomes. Children transition to a stander or wheelchair once they’ve built up strength, but continue to use the prone cart regularly.

The prone cart used at Gillette has extra benefits. The device, which just received a patent from the United States Patent and Trademark Office, was designed by a team of Gillette rehabilitation therapists who envisioned—then created—a prone cart just for kids. With expandable length, an adjustable handle and other built-in features, the new carts make exploring the hospital or wheeling to therapies a breeze. 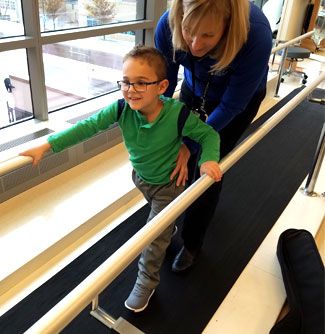 “Time on a prone cart stretches the hip muscles and strengthens the core and upper body muscles, all while on a comfortable and mobile surface,” explains Angela Sinner, DO, a pediatric rehabilitation physician.  “Our prone cart’s custom design builds children’s tolerance of this important position.”

“The moment I knew it was worth it”

Brock’s family noticed an almost-immediate difference in his muscle tightness after the surgery. His daily and weekly improvements were aided by intense rehabilitation.  “The therapists incorporated play and fun into his sessions,” says Sandahl. “I mean, what kid wouldn’t want to go play?” She adds with a proud smile that Brock’s therapists described him as one of the smartest 4-year-olds they’d ever met.

Seeing Brock walk for the first time after surgery brought Sandahl to tears.  “His foot was completely on the ground, heel-to-toe.  I’m still crying about it. At that moment I knew it was worth it.”

Although Brock told his mom he wanted to live at Gillette because of all the fun he was having, eventually he returned to his home, preschool and little brother.  He continues outpatient therapies—and he still spends some of his time lying on his stomach at home. 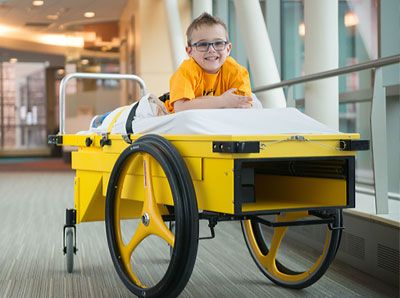 From greater mobility and strength to lesser risk of falling—even better sleep—Sandahl says that Brock’s rhizotomy has been life-changing in more ways than one.  “Brock is unstoppable. He sees that he’ll be able to walk again with hard work. He’s never let cerebral palsy bring him down.”

Editor’s note: The Gillette Prone Cart is available to other hospitals throughout the U.S. for purchase. Call 651-290-8712 or send us an email for more details.