“Everything is Awesome” with Premier of LEGO Wheelchair Figure

This week, LEGO company unveiled its first-ever figure to have a disability.  Clad in a skull cap and hoodie and sitting in a wheelchair, the figure is the company’s response to #ToyLikeMe, a campaign launched last year that called for LEGO—and others—to represent children who have special needs.

With the move, LEGO joins 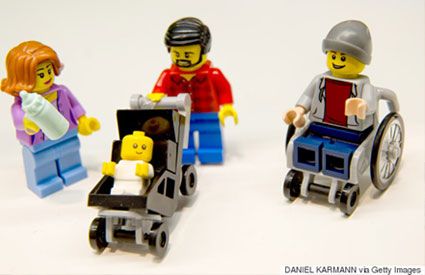 similarly progressive companies like American Girl, Fischer Price and British doll manufacturer Makie in creating inclusive toys.  The availability of such toys is significant for parents and kids alike.

Why so significant?  Because for decades, LEGOs have been a childhood staple.  Figures that represent children of all abilities are valuable conversation-starters for our patients —a way to reinforce the message that children of all shapes, sizes and ability levels can play together and forge friendships.

It’s another move toward greater acceptance and understanding of people who have disabilities, whether those different abilities are visible or not. This children’s book, published last year, sent a similarly important message.

I congratulate LEGO company for this historic move (and to celebrate, I’m doing my happy dance to “Everything is Awesome” in the privacy of my office.  Not sure why?  Just watch the LEGO Movie).  More importantly, I urge other large toymakers to follow suit.  Though a toy figure may seem small, it means volumes to the children whom those figures represent.