Ava O’Neal’s mother, Melissa Dunlap, describes the moment of Ava’s birth as “complete chaos.” And it’s with good reason. After ultrasounds indicating a typically developing baby, Dunlap was shocked to discover Ava had a cleft, or split, in her upper lip. Closer inspection revealed the roof of her mouth, called the palate, was split as well. 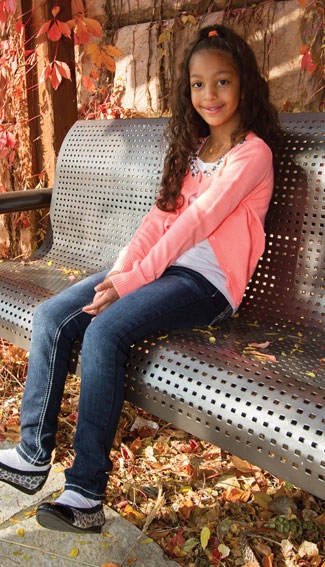 Hours after Ava’s arrival, Dunlap’s community hospital connected her to the craniofacial team at Gillette Children’s. Within days, Gillette experts had examined Ava and developed a treatment plan. She began by wearing a presurgical orthopedic appliance, called an OrthoCleft® retainer, during the first months of life.

Dunlap says she’s thankful to Gillette for providing expertise and reassurance when she needed it most. “They put me at ease and explained everything thoroughly,” she recalls. “There was never a question that went unanswered.”

Ava was fitted with her OrthoCleft retainer when she was just one week old. Weekly appointments ensured the custom-made device continued to fit properly as she grew. At 3 months old, craniofacial specialists successfully closed Ava’s cleft lip. Dunlap likens the experience to being part of a miracle. “We were thrilled and amazed,” she recalls of seeing Ava after surgery. “Nothing could prepare me for that moment.”

The Gillette team repaired Ava’s cleft palate during a second surgery six months later. She’ll need a final surgery, a bone graft to completely close her palate, in about a year. In the meantime, Ava is doing something Dunlap never dreamed possible — she’s modeling. It’s a natural fit for the gregarious 8-year-old, who loves singing, dancing and acting.

Dunlap attributes her daughter’s confidence, in large part, to the exceptional care she’s received at Gillette. “When I look at Ava, I see this fantastic personality, this outgoing child,” she says. Gillette has enabled her to flourish through all of this.”