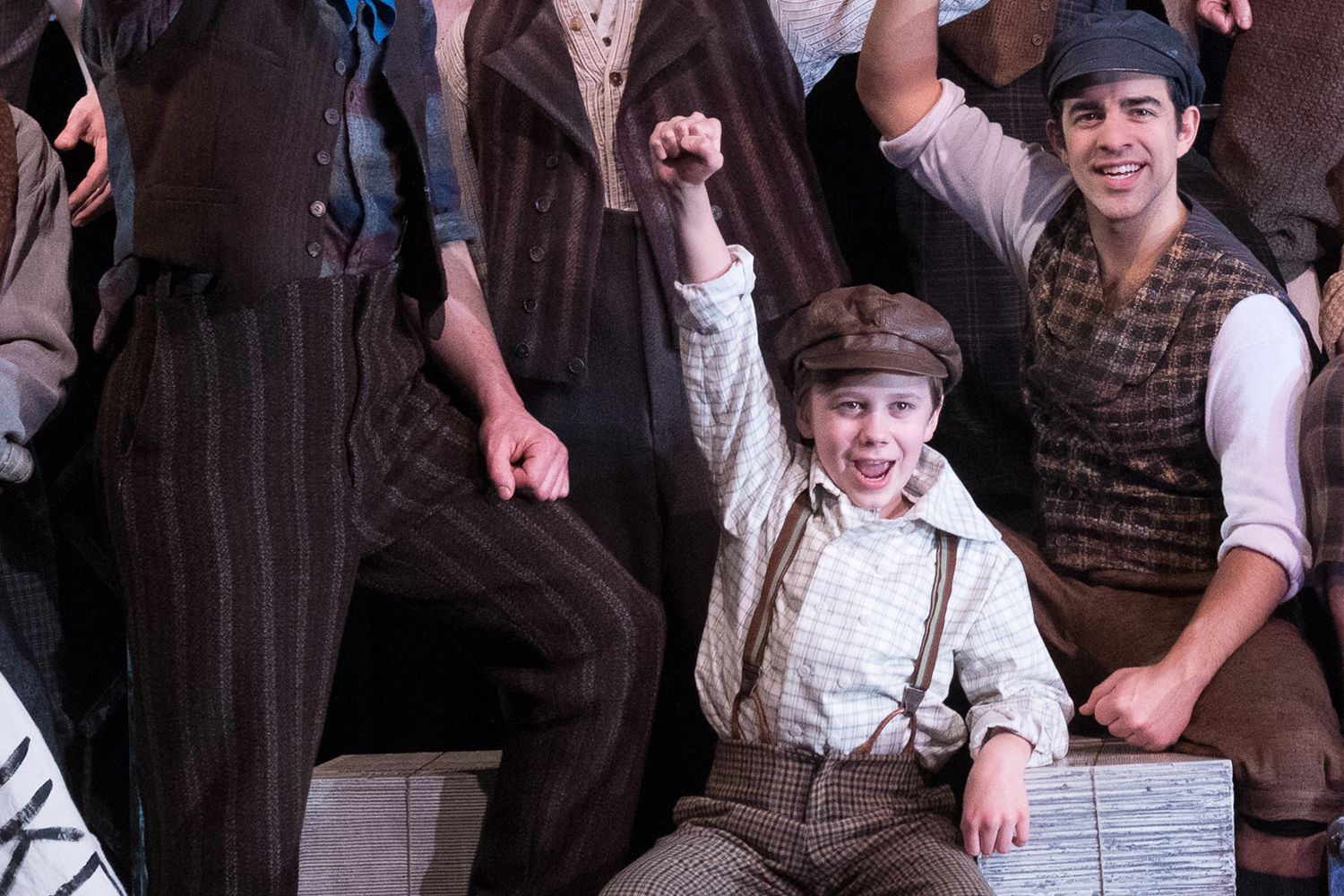 May 6 is Wishbone Day – or the International Day of Osteogenesis Imperfecta (OI). To honor the day, we're sharing the story of Jon-Erik Chamberlain, a young man who receives treatment for the condition at Gillette. Jon is now 15 years old and can act, dance and sing. He's a triple threat performer who has an incredibly bright future ahead of him. Read his story here.

A “freak” Frisbee accident helped to launch the career of one of the stars in the Chanhassen Dinner Theatres' production of “Newsies: The Broadway Musical.”

Jon-Erik Chamberlain began his work in the theatre because a medical condition prevented him from playing sports.

“Because of the risk of injury, I can’t play sports like football or hockey so I thought theatre would be a good hobby for me,” he says. “I’m lucky because I was kind of successful right away.”

The 12-year -old from Corcoran, Minnesota is what they call a “triple threat”—he sings, dances and acts. He was totally surprised that he won the role of Les—one of the main characters in the show that’s inspired by the real-life Newsboys Strike of 1899 in New York City.

“My sister’s friend told me about the “Newsies” auditions. My mom drove me to the dinner theatre and I sang a song and said a few lines,” he recalls. “I wasn’t sure they would cast me because, at the time, I didn’t really know how to tap dance. There’s a lot of dancing in the show.” 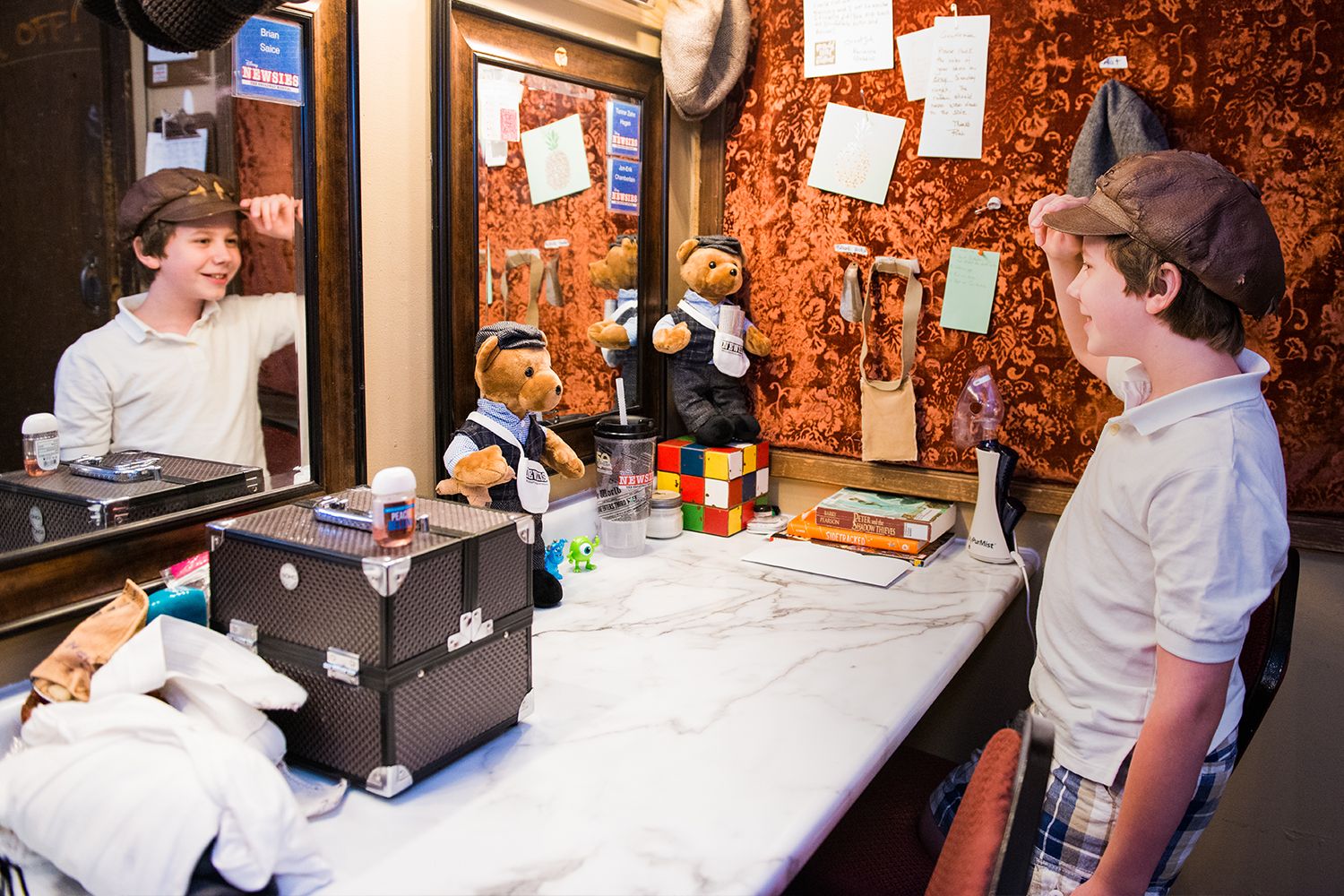 He auditioned in November and in December his mother gave him the good news that he was cast. That started intense tap dancing training. “One of my mom’s friends is a good tap dancer. I worked with her and became a pretty good tap dancer in just a few weeks,” he says.

Jon-Erik has osteogenesis imperfecta (OI), better known as “brittle bone” disease, and says his health concerns are part of why he became interested in acting. There are at least eight forms of OI and Jon-Erik has one of the milder forms of this genetic condition. 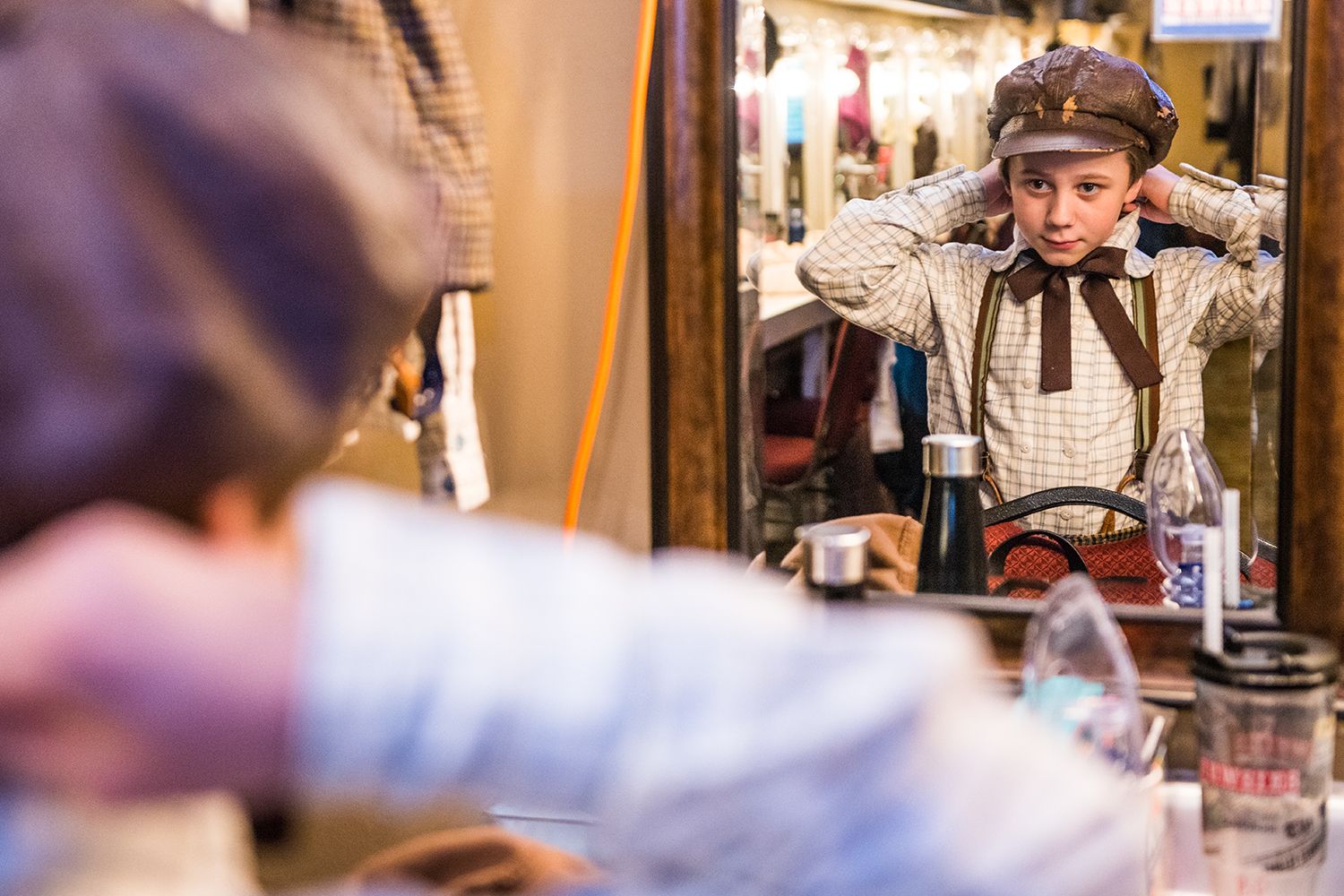 A “freak” Frisbee accident began Jon-Erik’s journey to be officially diagnosed with OI when he was 3 years old. “He was playing Frisbee with his dad,” his mother Deborah Chamberlain recalls. “He took a small fall and then complained about his arm hurting. We brought him to our pediatrician who told us his arm was broken and we should take him to Gillette Children's for further testing. For him to break a bone due to a rather gentle fall was odd.”

When the Chamberlains first came to Gillette nine years ago they saw orthopedic surgeon, Deborah Quanbeck, MD. “A few things he presented with made me suspect he might have OI,” Quanbeck recalls. “The break in his arm was a bit unusual because the bone broke so easily and he had a blue tint to his sclera—the part of the eye that’s usually white.”

After genetic testing, body scans and other tests doctors diagnosed Jon-Erik with OI.

“It actually was a bit of a relief to know what was going on with him,” Deborah Chamberlain recalls. “We didn’t know symptoms of OI include blotchy skin, bruising more easily and short stature. Jon-Erik had those symptoms but we never suspected it was a genetic condition. Once we got a diagnosis it answered a lot of questions and we got a solid treatment plan from Gillette.”

A Plan to Help Him Perform

Once a year he has a long visit at Gillette where he sees various doctors including, orthopedic surgeon, Stephen Sundberg, MD, pediatrician Kevin Sheridan, MD and physical medicine and rehabilitation physician, Nanette Aldahondo, MD. These doctors coordinate his care and make sure he can do the things he enjoys doing—like perform on stage. 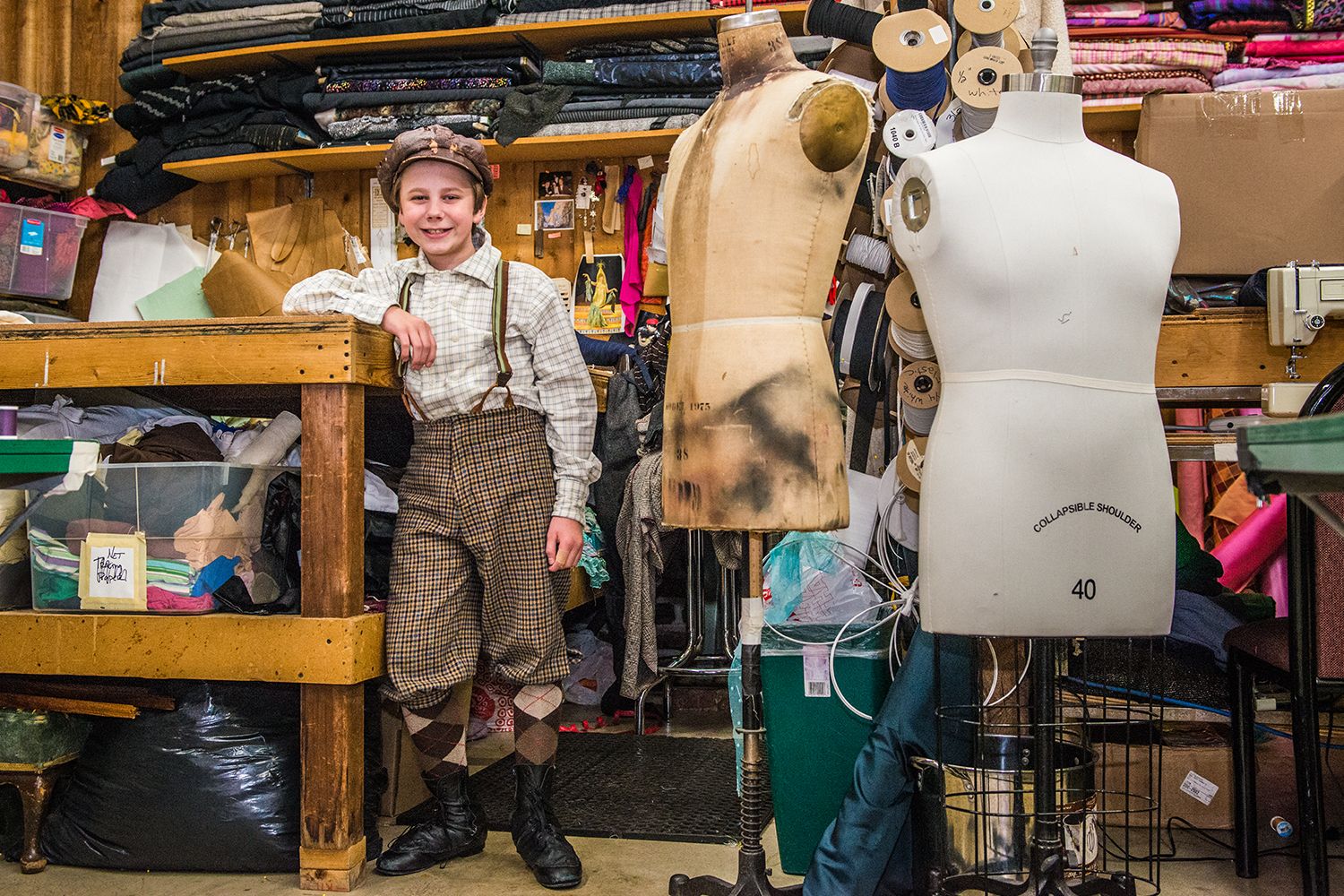 “Jon-Erik is a great example of how the multidisciplinary care offered at Gillette can really help the patient and family,” according to Quanbeck. “For example, he was referred to my care to treat his broken right arm and because I work at Gillette I was able to put together a plan to offer him a lot of care. Jon-Erik is seen by our orthopedic doctors, geneticists, radiologists, endocrinologists, and meets regularly with an orthotist to get shoe inserts as his feet grow.”

Gillette nurse practitioner, Ann Schminski, has worked with Jon-Erik for the past three years and oversees his IV therapy treatments. She’s one of his biggest fans. “He’s always smiling and cheerful. He’s a great example for our other OI patients,” Schminski explains.

She follows his acting career and was thrilled when he was cast in “Newsies.” She excitedly booked her tickets to see him perform at the Chanhassen Dinner Theatres. “It was so fun to see him dancing on stage. I know the other cast members have really embraced him and look out for him,” Schminski says. “I’m really proud of him and appreciate his hard work and talent.”

Jon-Erik is still active in theatre and is extremely involved in his Speech and Debate league. Like many things this past year, his tournaments have been online this season. Jon-Erik qualified for the Regional Championships that were held in person April 29-May 1, 2021. While there, he further qualified for the National Championship, to be held online in June of 2021. He also plans to prepare for his getting his driver’s permit this summer, will perform a role in "The Music Man", and otherwise, spend extra time out on the water with his friends and family. 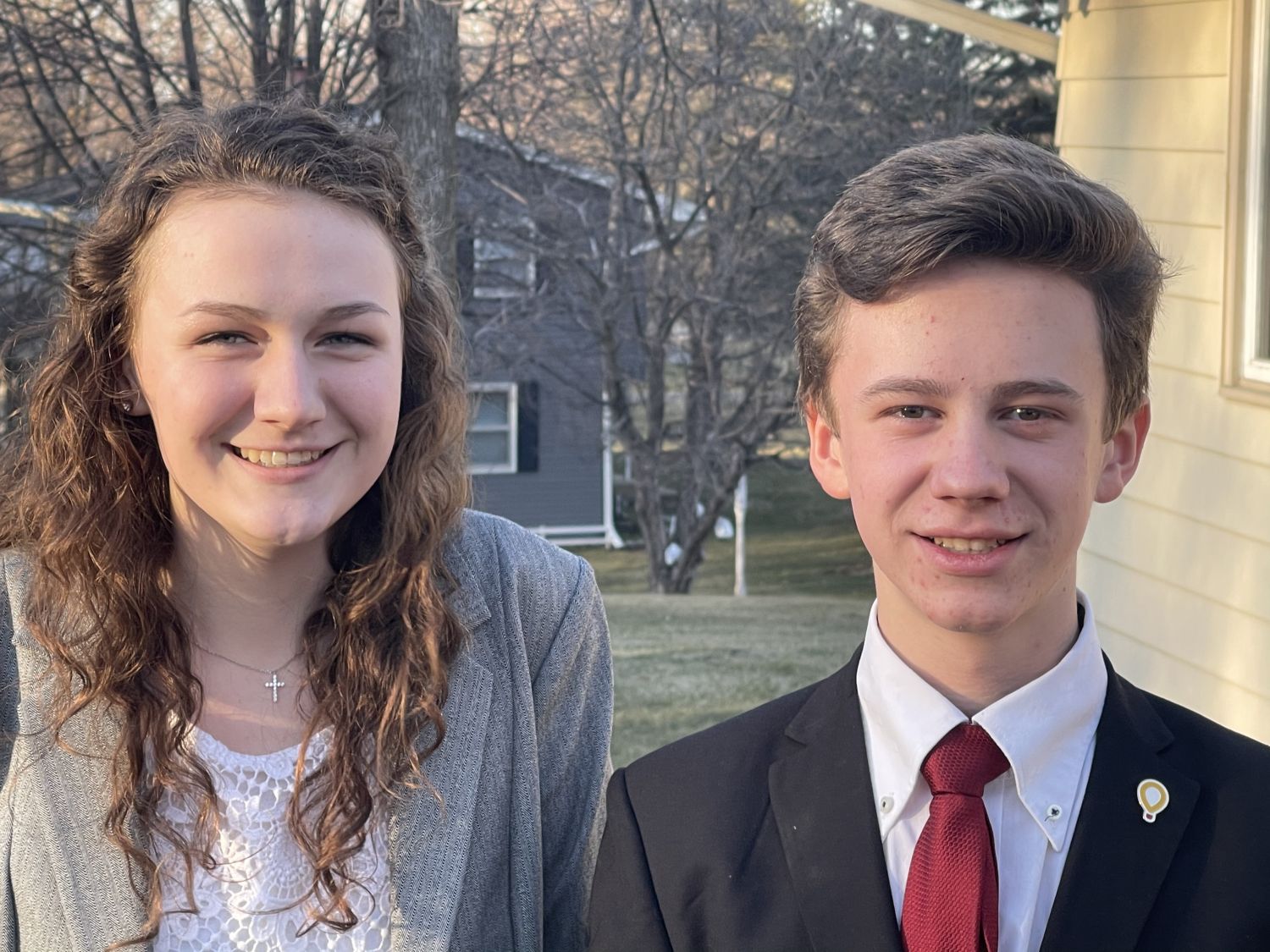 Jon-Erik Chamberlain with his sister, Luci prior to a speech competition in 2021.