Gillette Children's has launched a new resource to help parents of children who have complex, rare or traumatic conditions.

The first book released by the new Gillette Children’s Healthcare Press is Spastic Diplegia—Bilateral Cerebral Palsy and it’s written by Lily Collison, an Ireland-based author and the mother of a Gillette patient. Lily’s aim is to share her personal story combined with an empowering and evidence-based guide for living a full live with spastic diplegia, a form of cerebral palsy.

“I wrote this book to help parents of young children who have cerebral palsy, specifically spastic diplegia, as well as adolescents and adults who have the condition.” Lily says. “I wanted to help increase awareness and answer specific questions many parents and patients have.” 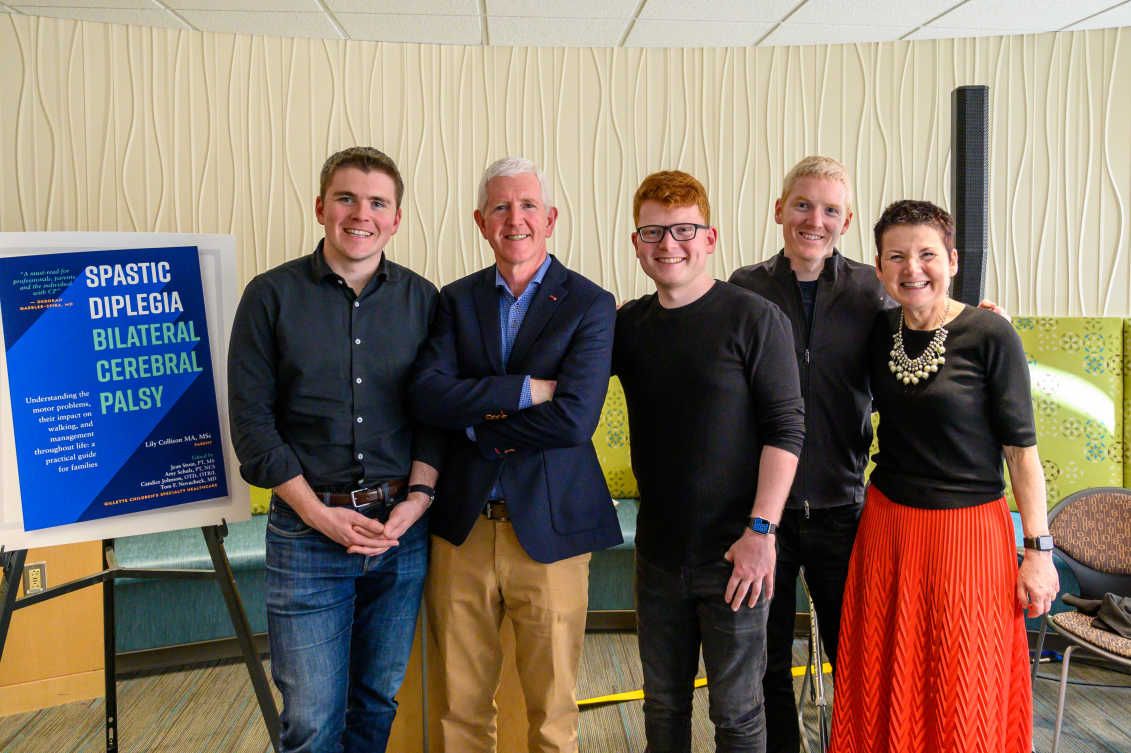 The Collison family came to Gillette for the book launch in March of 2020. Lily Collison worked with a team of Gillette experts to make sure the medical information in her book was sound.

Missing milestones and looking for answers

Lily’s youngest son, Tommy, was born in 1994 and received his diagnosis of cerebral palsy (CP) when he was around 1-year-old. At that time the Collison family was living in rural Ireland and had a difficult time finding cerebral palsy resources and care. In his first year of life Tommy was missing milestones like sitting up and walking.

Tommy recalls it was a very difficult time for his family especially when his mother received a harsh comment from a provider reading Tommy's initial CT scan. “The verbatim quote that I’ll never forget is, ‘not much active brain,’ and my mom was kind of politely encouraged to go home and mind her other kids,” Tommy says. 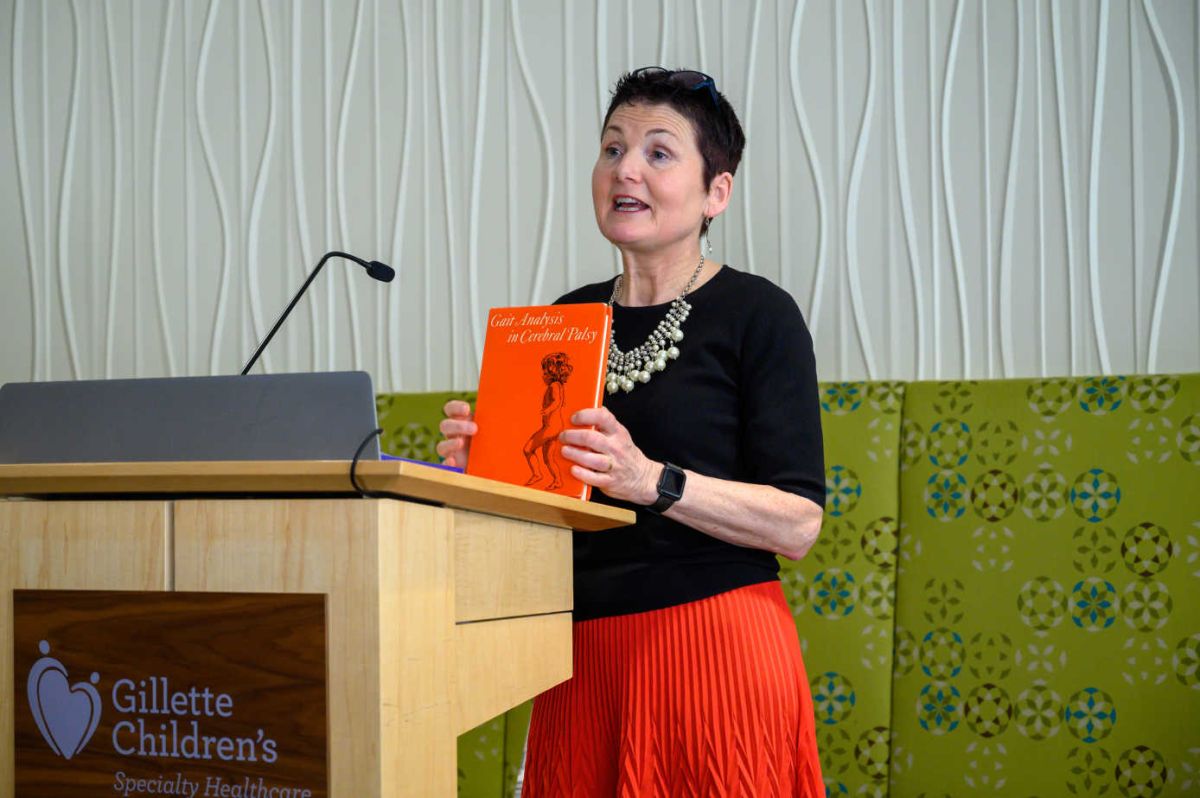 Lily Collison says the 1991 book by Gillette orthopedic surgeon, James R. Gage, MD, was a valuable resource and helped build the foundation of her family's strong relationship with Gillette.

Building a foundation of friendship

That diagnosis launched Lily on a journey to read as much information as she could about cerebral palsy and to find the best care for Tommy. Her quest led to Gillette Children's and orthopedic surgeon James R. Gage, MD.

Gage’s 1991 book, The Identification and Treatment of Gait Problems in Cerebral Palsy, was edited by Gillette providers Michael H. Schwartz, PhD, Steven Koop, MD  and Tom F. Novacheck, MD. It’s considered to be one of the first books to deal specifically with the treatment of gait issues in cerebral palsy.

“I devoured that book with a medical dictionary next to me!” Lily exclaims.

In fact, she was so impressed with Dr. Gage and his approach that she wrote him a letter asking if he would operate on Tommy to help with orthopedic issues. Gage agreed and the Collison family made their first trip to Gillette in 2003 so Dr. Gage could perform Single-Event Multilevel Surgery (SEMLS) on Tommy. It was Tommy’s first trip to America and he has vivid memories of visiting the Mall of America days before his surgery.

“And my abiding memory of that surgery is, without exception, kind of everyone that I dealt with from the surgeon to the nurses to the tech and everyone in between, they really just spent a lot of time making sure that you felt comfortable,” Tommy says. 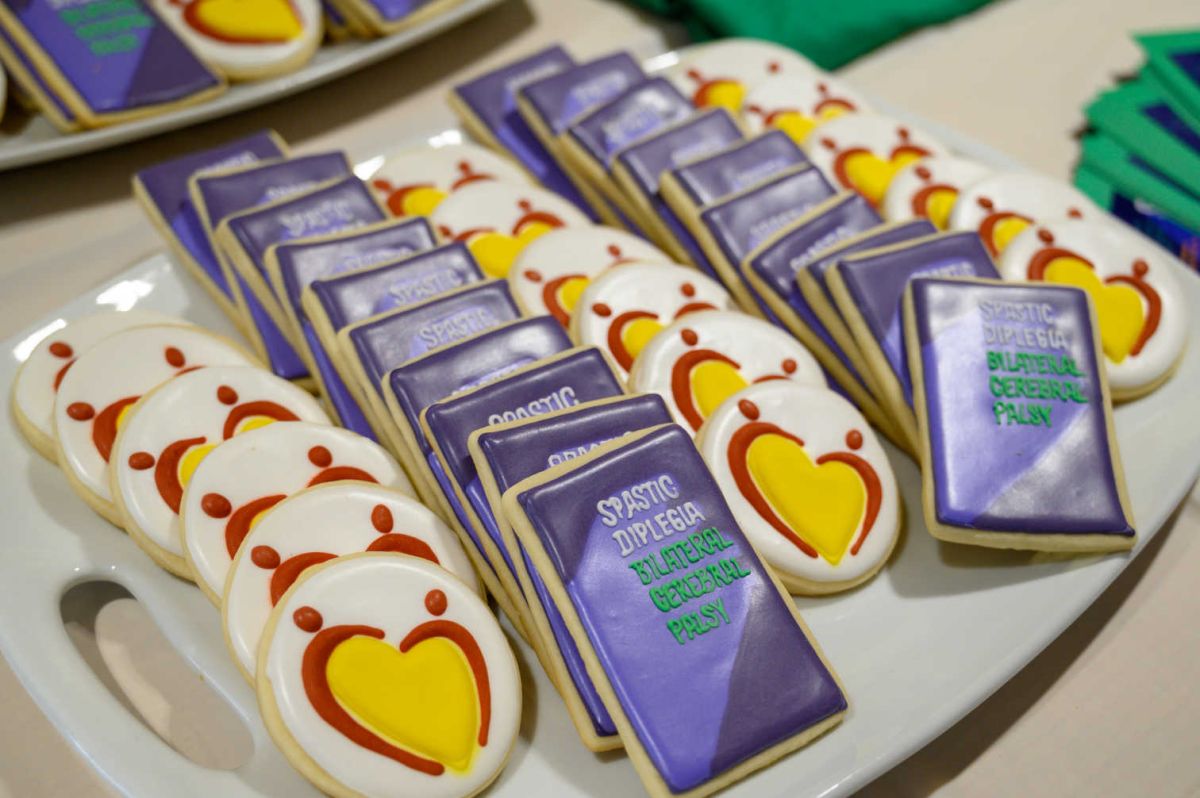 The launch of the Lily Collison's book and Gillette Children's Healthcare Press was celebrated with special cookies.

The surgery was successful and is the foundation for a long relationship between the Collison family and Gillette.

“We’ve been coming to Gillette for over 15 years and, Tommy’s had four procedures over the years. To me it was a ‘no brainer’ to work with Gillette on this book,” Lily says. “I was proud to work in close collaboration with the medical experts at Gillette on this book and hope it can serve as a resource for the millions who need to know more about their spastic diplegia,” she adds.

Cerebral palsy is the most common cause of lifelong, childhood-onset physical disability in most countries, with an estimated 17 million diagnoses around the world. One-third of those who have CP have spastic diplegia.

“There are several resources about CP, but until now there wasn’t a comprehensive book about spastic diplegia accessible to a broader community," Lily says.

“It’s a very, very new sort of book where it threads the needle between being pure memoir and being pure medical textbook. I hadn’t come across this idea before that you could have the best bits of both and have a book that parents could understand,” Tommy says. 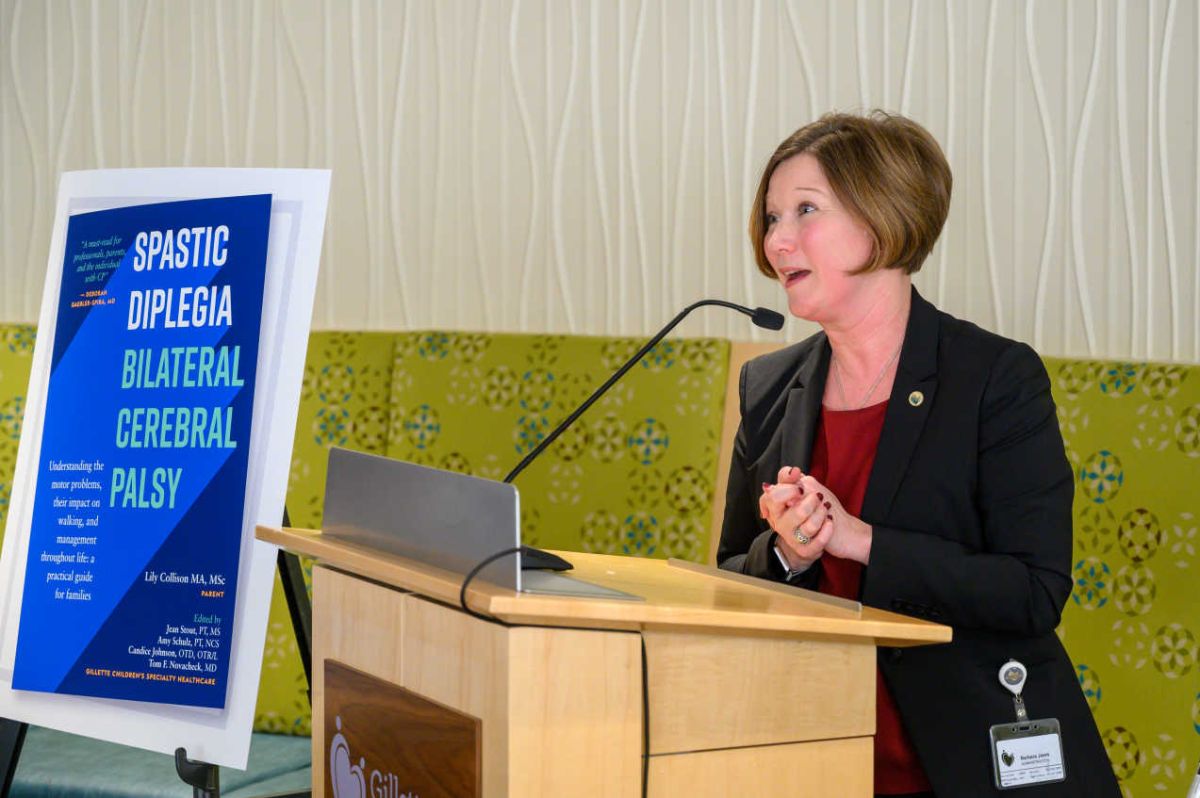 Gillette President and CEO, Barbara Joers, says the entire organization is excited about Lily Collison’s book and the launch of Gillette Children’s Healthcare Press. “Lily’s book will help assist patients and caregivers ,” Joers says. “Our press will focus on educating our community, improving understanding of complex, rare and traumatic medical conditions and advocating for the needs of the patients we treat here at Gillette.”

Gillette performs 81% of CP-related orthopedic surgeries in Minnesota and treats all forms of cerebral palsy—including the most severe. Gillette provides care to children from 41 states and 15 countries. 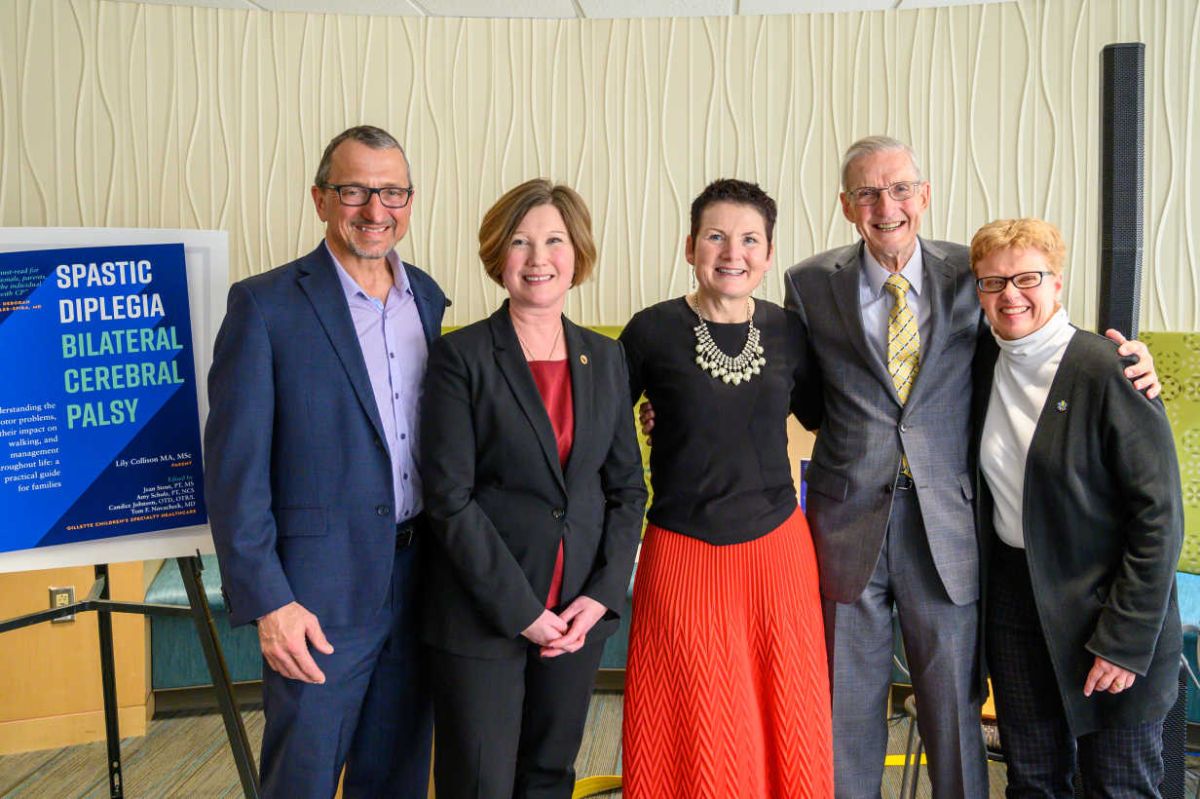 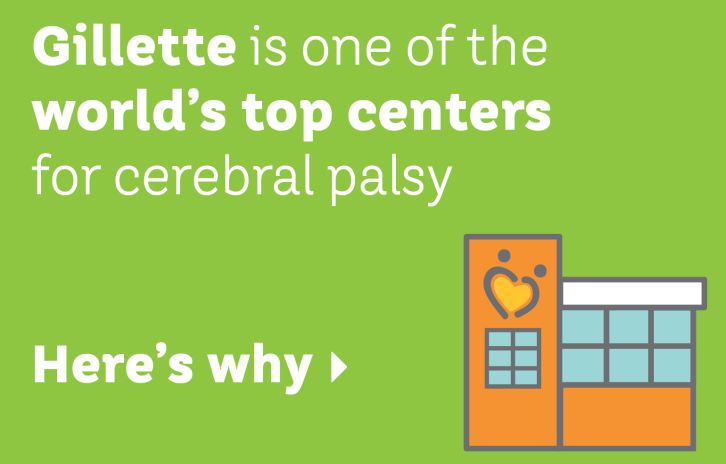 Infographic: Why Gillette is One of the World’s Top Centers for Cerebral Palsy