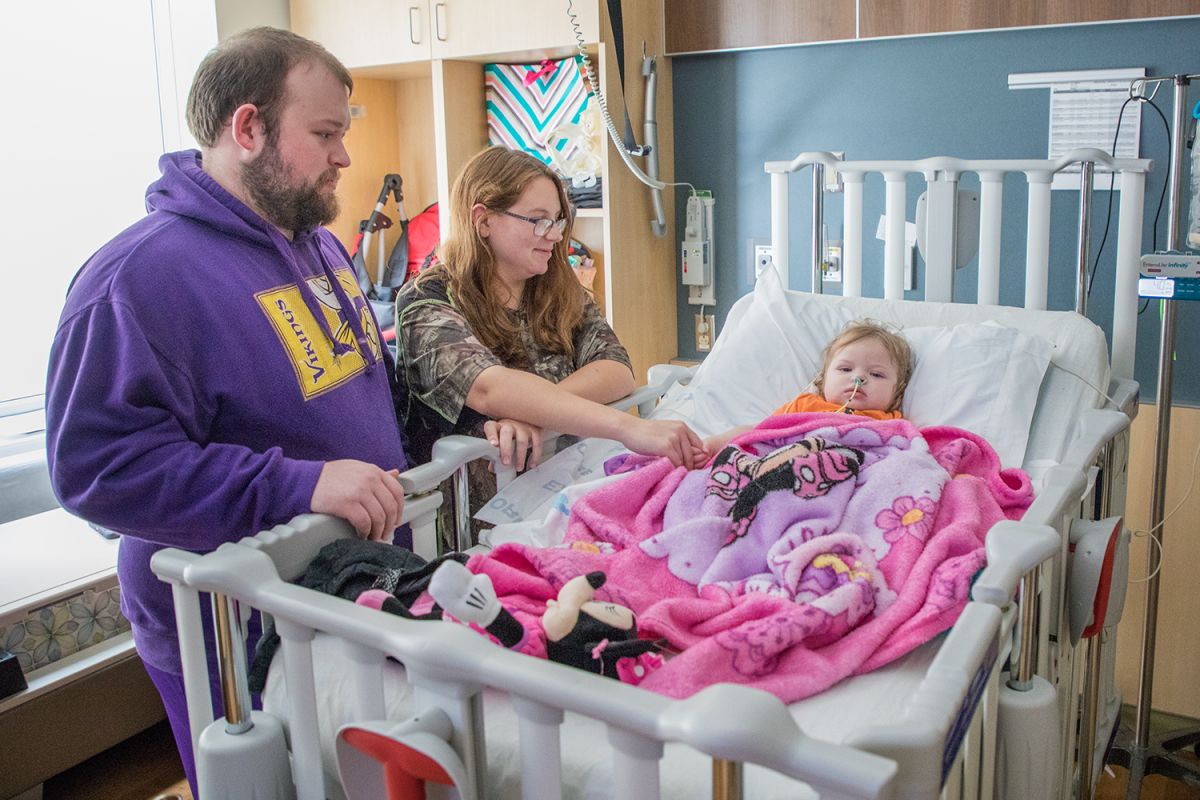 Dylan and Haley Long from Iron, Minnesota are grateful their daughter, Aria, is receiving therapy and care at Gillette.

A researcher from the University of Minnesota has identified a virus associated with acute flaccid myelitis (AFM), a rare, polio-like disorder that can cause sudden paralysis in children.

The chief pediatrics resident at the U of M, Heidi Moline, examined the cases of children diagnosed with AFM and says the virus, enterovirus D68, was found in the cerebrospinal fluid of one of the six patients and reports this helps to explain one of the causes of AFM.

You can read more about the AFM discovery made by the U of M and the Centers for Disease Control and Prevention (CDC) in the Star Tribune.

Last fall, most of the Minnesota children diagnosed with AFM received treatment at Gillette Children’s.

The patients, who came from across Minnesota, were cared for by several teams of Gillette providers including the pediatric rehabilitation medicine team, several pediatric neurologists, and many rehabilitation therapists. Several AFM patients are admitted into the Gillette Inpatient Rehabilitation Unit and are receiving physical therapy, occupational therapy, speech therapy, music therapy and other medical assistance.

Gillette pediatric rehabilitation medicine physician, Angela Sinner, DO, wants parents to know that although a diagnosis of AFM can be daunting, Gillette has a strong team of expert physicians, therapists, nurses and other providers to help families in need.

“This is where Gillette’s coordinated care model can shine and really help to serve families,” Sinner says. “We’re able to help AFM patients through each stage of their recovery journey.” 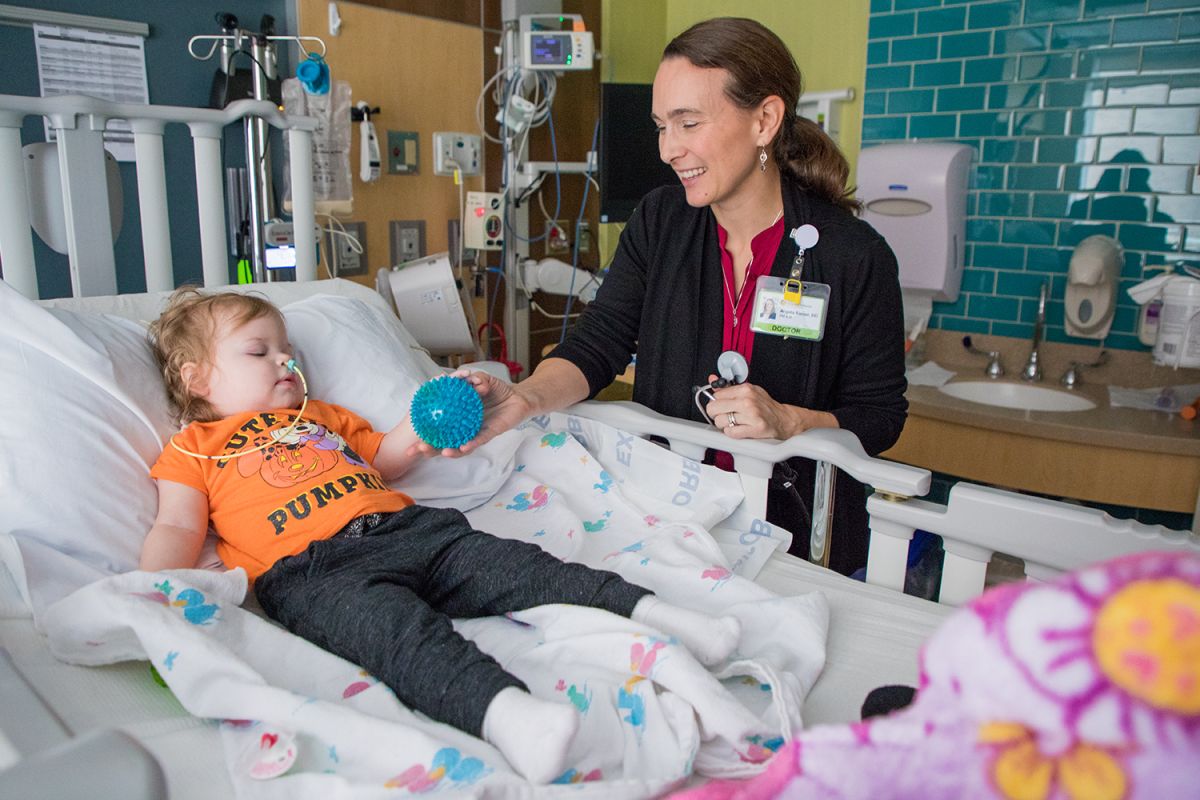 Gillette pediatric rehabilitation medicine physician, Angela Sinner, DO, wants parents to know about the strong team of expert physicians, therapists, nurses and other providers to help families in need.

Since mid-September 2018, six cases of AFM have been reported to the Minnesota Department of Health and state officials have issued an alert for doctors and parents to be aware of the disorder, which affects the nervous system and causes paralysis and reduced mobility.

Although the breakthrough at the U of M is significant, health officials still haven’t found the exact cause for the illness and are working to find more information to treat and prevent AFM. The Centers for Disease Control and Prevention (CDC) reports during the past four years it has seen an increase in the number of people diagnosed with AFM. According to the CDC, 362 cases of AFM have been confirmed since August 2014.

An AFM diagnosis can be difficult for any family, but parents who have children receiving treatment at Gillette are offering encouragement and advice.

When it was confirmed that his 17-month-old daughter, Aria, had AFM her father, Dylan Long, did what any parent would—he Googled the condition. “I had never heard of AFM so I went online and read about it,” Long recalls. “What I read was not good. The articles said there was almost nothing we could do to help Aria. My wife and I were in shock and didn’t know what we were going to do. We’re so relieved that we’re getting help at Gillette,” Long says.

The Long family wants to share their story to inform families facing a similar diagnosis and to provide hope.

Terrified Parents Fly from Hibbing to the Twin Cities for Help 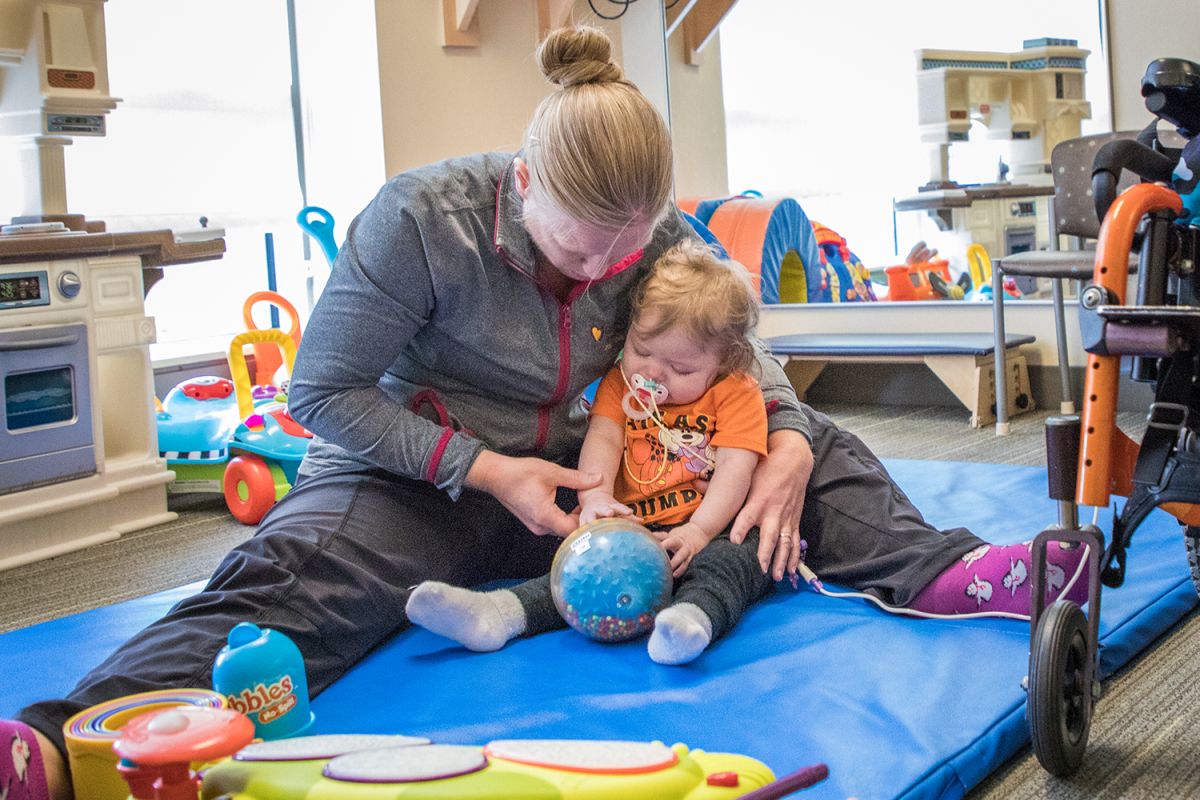 Like most children who are eventually diagnosed with AFM, Aria’s story began with a stuffy nose and cold symptoms. Aria’s mother, Haley, took her to their local clinic in Iron on Sept. 18, 2018. “They told us she had strep,” Haley Long says. “A few days later she had no use of her left leg and had some seizures. We took her to the emergency room and they quickly arranged for Aria to be transported by helicopter to from our hometown of Iron, Minnesota to Children’s Minnesota in Minneapolis. My husband and I were terrified,” Haley Long recalls.

Aria had two MRIs of her leg and brain before Children’s Minnesota doctors diagnosed her with AFM. Her parents say after the initial diagnosis things began to get worse for Aria. At one point they were told Aria would be on a breathing tube in a matter of hours. Thankfully, Aria began to improve after she was treated with immunoglobulin—an antibody produced mainly by plasma cells to neutralize bacteria and viruses. Aria began to stabilize and stayed at Children’s Minnesota for about two weeks before coming to Gillette for inpatient rehabilitation on Oct. 4, 2018.

“We’re so glad Children’s Minnesota has a strong partnership with Gillette,” Dylan Long says. “A doctor from Gillette examined Aria while she was at Children’s and the doctors from both hospitals told us the best place for Aria to get therapy and continue her recovery was Gillette.” 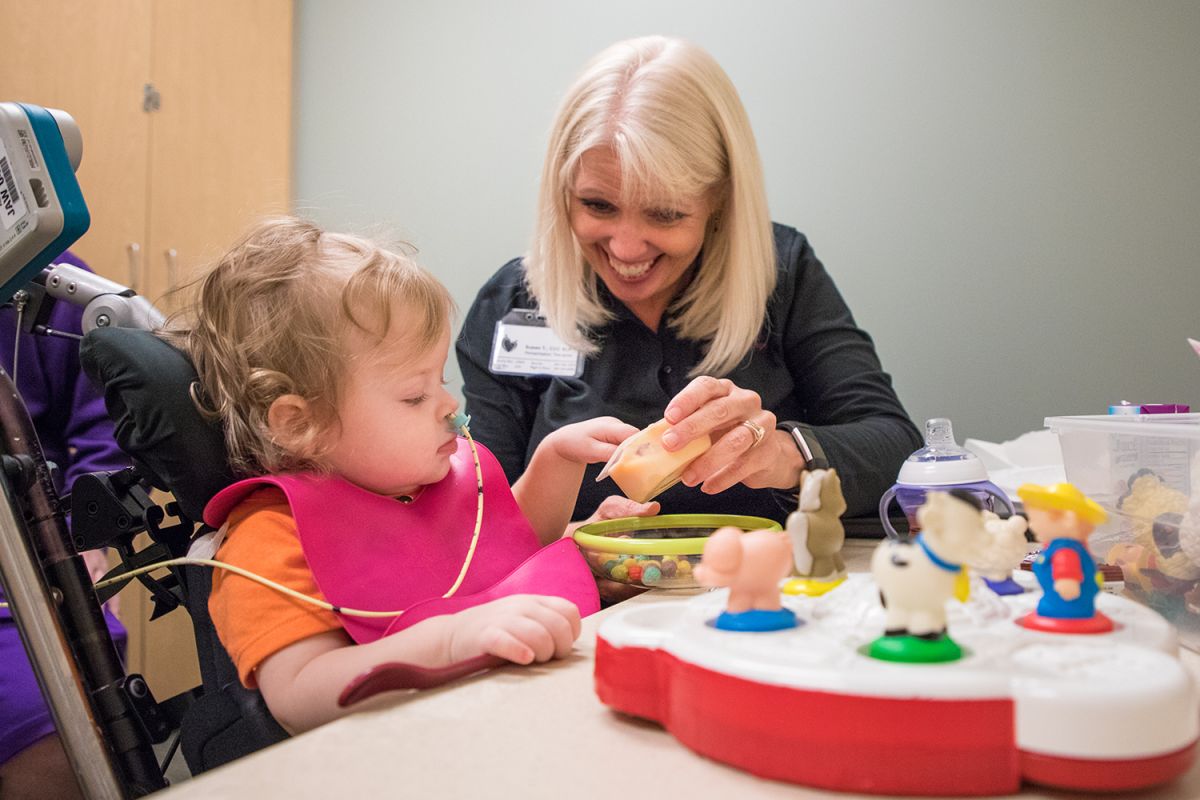 Gillette speech therapist, Susan Ellerbusch Toavs, works to help Aria regain strength in swallowing and eating. Aria currently has a feeding tube in her nose to ensure she's getting the proper nutrition as she recovers from AFM.

A Stuffy Nose, then Bilateral Tremors and Paralysis

Sophia is an adorable 5-year-old who is also recovering from AFM in the Gillette Inpatient Rehabilitation Unit. Her mother, Victoria, asks that the family’s last name not be used to protect Sophia’s privacy.

Like Aria Long, Sophia’s parents brought their daughter to the doctor because she had a stuffy nose and fever. The family lives in Chanhassen, Minnesota and brought Sophia to an urgent care facility where she was tested for strep and bronchitis. Both tests came back negative but Sophia’s mother kept her home from preschool.

“She started feeling a little better,” Victoria recalls. “She begged me to let her play in her soccer game on Saturday and I decided to let her try to play.” By that Monday morning, Oct. 1, 2018, Sophia could not raise her arms past 90-degrees and her mother rushed her to the emergency room at Methodist Hospital in St. Louis Park, Minnesota.

“I’m a physical therapist,” Victoria says. “I knew there was something seriously wrong with my daughter. Her condition was deteriorating fast and my husband and I became very concerned.”

Sophia was transferred to Children’s Minnesota in Minneapolis and, like Aria, was treated with immunoglobulin. “After seven days she started to get a little better,” Victoria says. “I asked the doctors ‘What’s the next step?’ They said, ‘We’re going to have a doctor from Gillette come to evaluate her and, hopefully, they’ll accept Sophia into their rehab program.’”

“We Love Our Gillette Team” 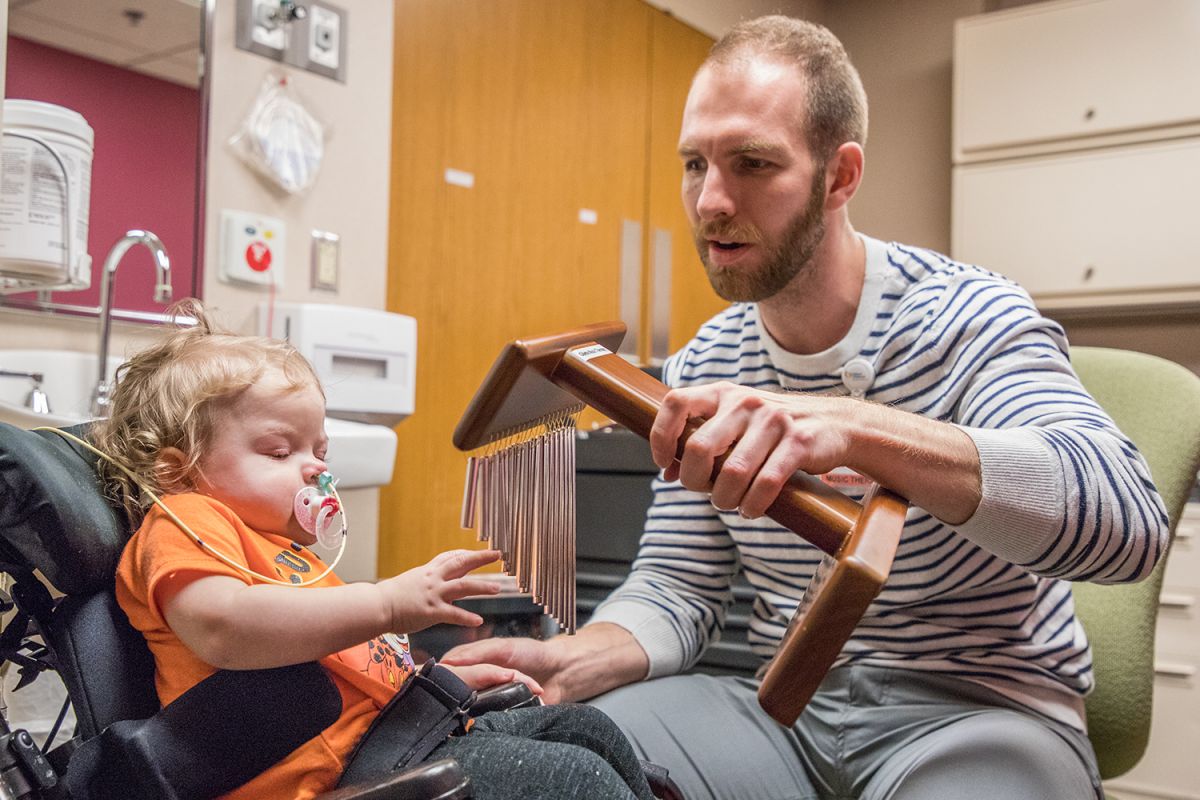 Victoria says she feels grateful and lucky her daughter is at Gillette. “We love our Gillette team. Dr. Sinner is her main doctor and checks on Sophia all the time,” Victoria says. Like Aria Long, Sophia’s care at Gillette is coordinated and comprehensive. Victoria was in the Gillette Inpatient Rehabilitation Unit in October 2018, and her mother quickly noticed improvements.

“Sophia is an active kid. She plays soccer, swims and she’ll soon earn a belt in Tae Kwon Do. When she came to Gillette she had trouble maintaining her balance and her posture was not good. As a physical therapist I’m very aware of these things,” Victoria says. “We’re still concerned with her regaining movement in her arms. I have to say, the therapists and Gillette are just the best.”

Victoria has a message she wants to share with parents. “Don’t wait. If your child has weakness or pain without an injury or fall, get it checked out immediately. Be empowered to be an advocate for your child.”

Angela Sinner, DO, understands parents can feel concerned about AFM and all the unknowns the condition brings. “What I want parents to know is, Gillette has a team of specialists ready to help. We’re used to treating complex and rare conditions—it's the core of our mission,” Sinner says. “We have the expertise to help kids and parents when they receive a concerning surprise diagnosis. It truly is what we’re here to do.” 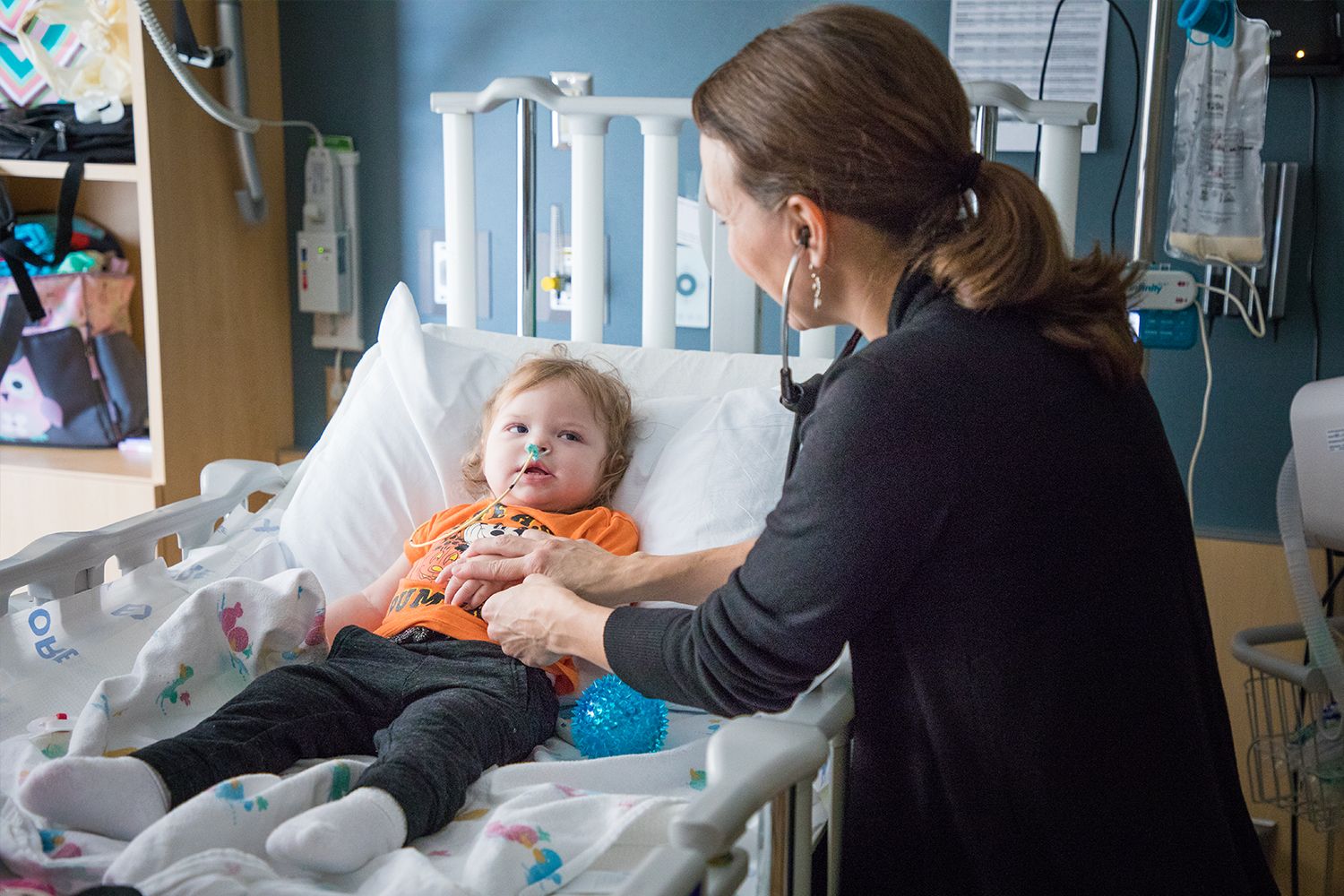 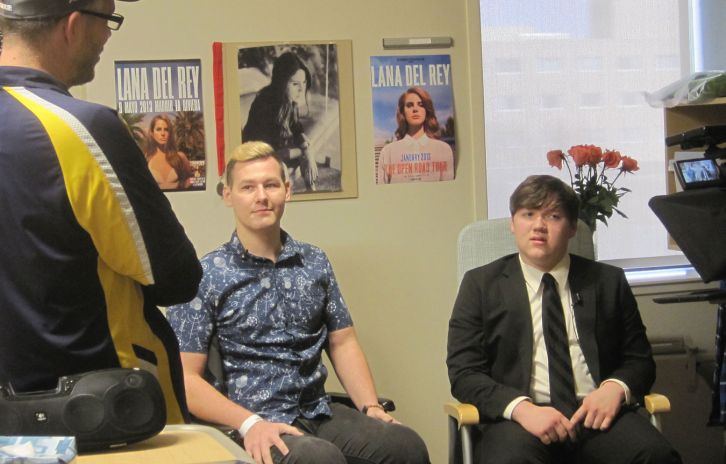 This is not what Earl Weir planned for his junior year in high school. The…