When Derek Kademan bundles up his l 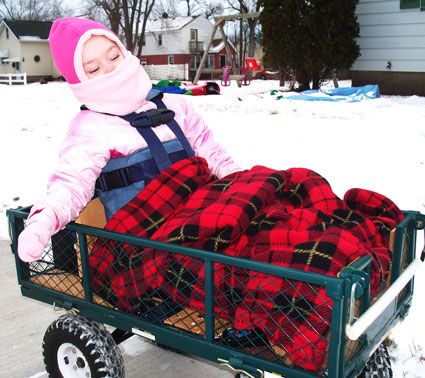 ittle girl, Christina, against the cold and places her into the green utility wagon for their daily walks, he’s keeping a promise he made to her as a newborn.

Complications from Christina’s premature birth — at just 27 weeks gestation — resulted in permanent damage to the white matter in her brain.  “That’s when I decided I’d do whatever I could to make life the best for her,” says Kademan.

For Christina’s mom and dad, making life the best for Christina has included nearly life-long treatment from Gillette Children’s.

Christina, who has cerebral palsy, became a Gillette patient when she was 2 years old. Thanks to her lifetime of care, today she’s communicating more, moving better and accomplishing more than anyone had thought possible.

“Christina is nonverbal,” says Kademan, “however, I would definitely say that she can talk up a storm.” She uses a combination of sign language and expressive gestures to communicate. For example, she picks her favorite outfits and let her parents know she wants grilled cheese for lunch.

This past summer, Christina underwent a major neurosurgery at Gillette, called a selective dorsal rhizotomy, which has permanently reduced the tightness in her muscles. After the surgery, she spent 30 days in the hospital undergoing intensive rehabilitation therapy. “There have been times in therapy when you can see the struggle to take steps, and yet, she doesn’t want to quit. She wants to keep going.”

During this time, Christina and her parents forged a special bond with Gillette employees. “The staff is wonderful,” says Kademan. “They ask, ‘How’s your day going?’ And they genuinely care. One of the staff brought flowers from her garden for Christina. It was beautiful. I like to think that Christina made an impact—that we were able to change their lives as they changed ours.”

Because of Gillette and her own perseverance, Christina now able to take more purposeful steps than ever before. And that’s a good thing, because Christina takes great joy in movement.  In fact, on Christina’s 9th birthday—which she celebrated July 4 during her inpatient stay at Gillette—Christina spent just minutes enjoying her cake before, recalls Kademan, she wanted to “go, go, go.”

“Instead of running around like most kids, we’re walking in a walker,” says Kademan. “Instead of somersaults, we’re practicing our rolling on a mat. Like most kids, Christina likes to go fast.”

And that’s where the wagon comes in. Rain or shine—or snow or sleet—Christina and her father make time for their wagon rides. Kademan outfitted the wagon with a 12-volt battery so he could plug in an electric blanket and holiday lights. They visit with the neighbors, and Christina beams. “She works so hard at therapy and school that you can’t slow down,” says Kademan. “If she’s not going to, why should I?”