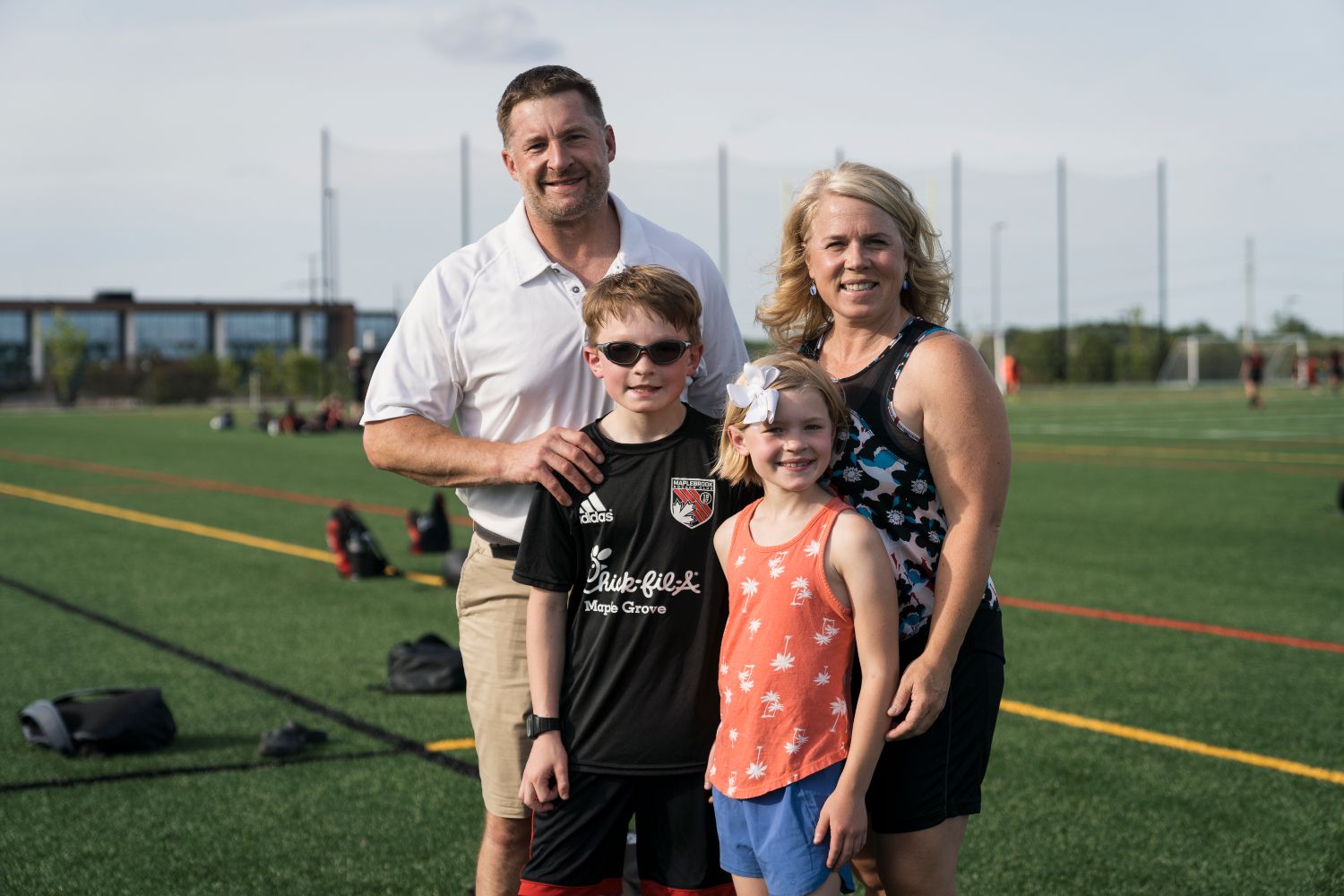 Toren Theiss is 11 years old. He’s an incredibly active young man who plays soccer, ski races and though he wouldn’t brag about it, does quite well at both. It wasn’t until a day in August two years ago when he was walking towards his mother Jill, that she realized something was wrong.

I was picking up Toren from summer school and watching him walk toward me. I noticed he kept walking over his right foot,” Jill recounts. “At first, I thought he was just messing with me and I told him to stop goofing around. He looked at me puzzled and said that was just how he walked. I asked him to walk down the hall again and noticed his right foot was turned inward. I then asked him to take off his right shoe. Sure enough, it was worn at an angle. I was really shocked I had not noticed it earlier.”

Toren’s parents are no strangers to his needing medical care. Toren had a variety of medical conditions after his birth that required numerous procedures throughout his early life. But this was many years in the past, his odd way of walking was a relatively new development.

“Toren’s geneticist has a daughter who had a similar issue that required treatment,” Jill says. “She told us that we should get an appointment at Gillette Children’s with Dr. Mark Dahl. That turned out to be excellent advice and we consider ourselves to be very fortunate to have received it when we did.”

Read their story in their own words, below. 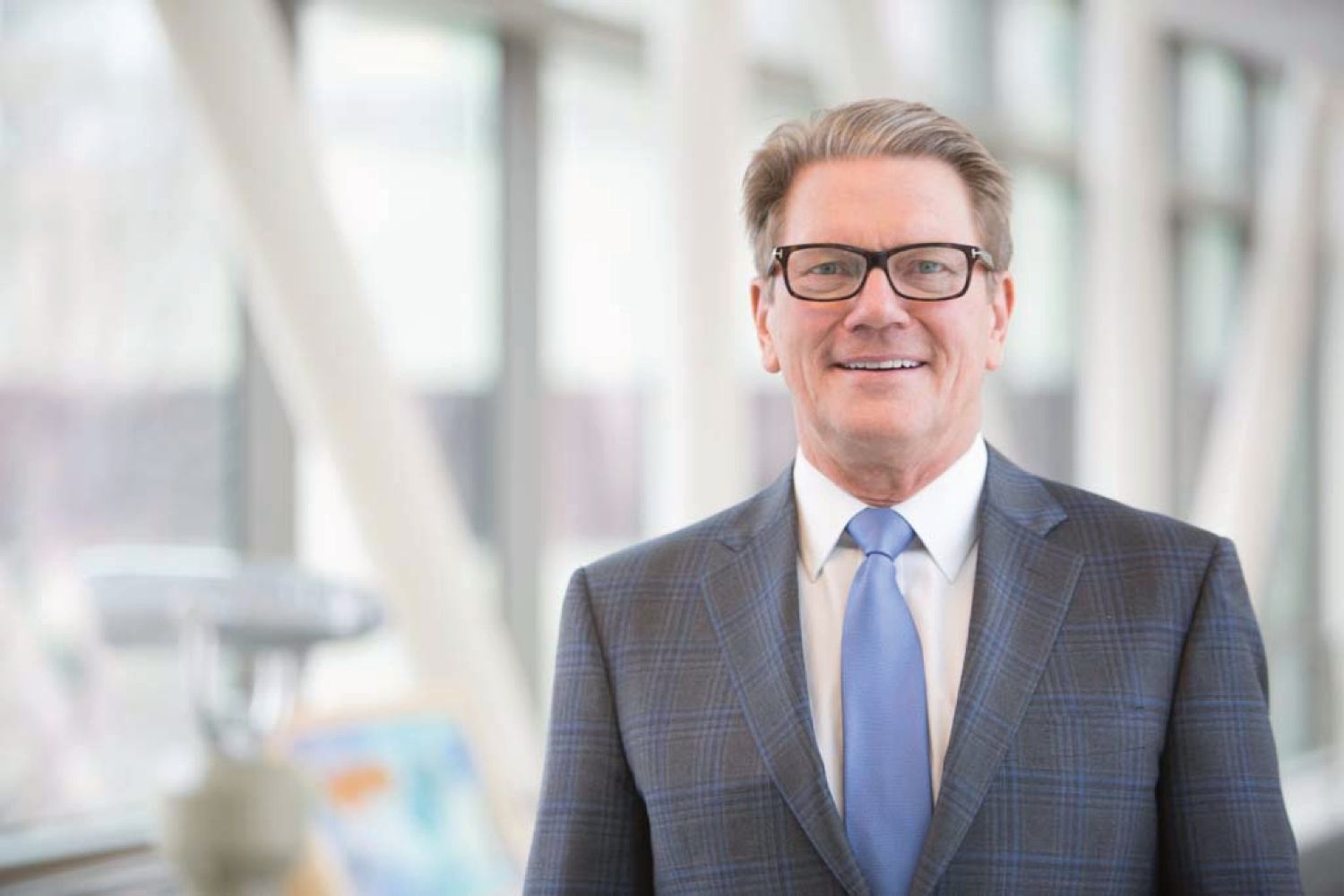 Gillette Children’s is a regional, national and international leader in treating children who have complex conditions, rare disorders and traumatic injuries. Mark Dahl, MD, is a world-renowned specialist in the treatment of limb-length discrepancy conditions, along with other complex orthopedic conditions.

Jill Theiss: From our first appointment, we felt very comfortable with Dr. Dahl. He took the time to answer our questions and come up with a treatment plan for Toren. He is an avid professional and we felt assured that we had the best surgeon to help our son with his medical condition. In addition to our geneticist’s daughter receiving care from Dr. Dahl, I later learned that one of my good friends and former racing teammates had received care from him as well.

Travis Theiss (Toren’s father): As Jill mentioned, Toren had a fair amount of medical care early on in his life. That was obviously difficult for us, but he didn’t remember any of it. So there’s a part of you that wonders how your child is going to respond. But like all of the things Toren’s faced in life, he took it in stride.

Jill: Dr. Dahl determined that they would monitor Toren’s progress over the coming year to fully understand his condition. In July of 2019, we brought Toren in for an appointment in the Gait and Motion Analysis facility at Gillette.

Toren Theiss: That was pretty cool. There were a lot of cameras. I think it was 72 or 74. I’m not sure, but it was a lot. After that we got to see what it looked like and they put a special filter on that made me look like I was an astronaut on the moon. That was fun!

Travis: It was pretty amazing to see all of the technology used in the lab. We learned a great deal from those appointments and it became clear that Toren would need some kind of surgical procedure to adjust the length of his right leg. We met with Dr. Dahl in August where he laid out what the procedure would entail. 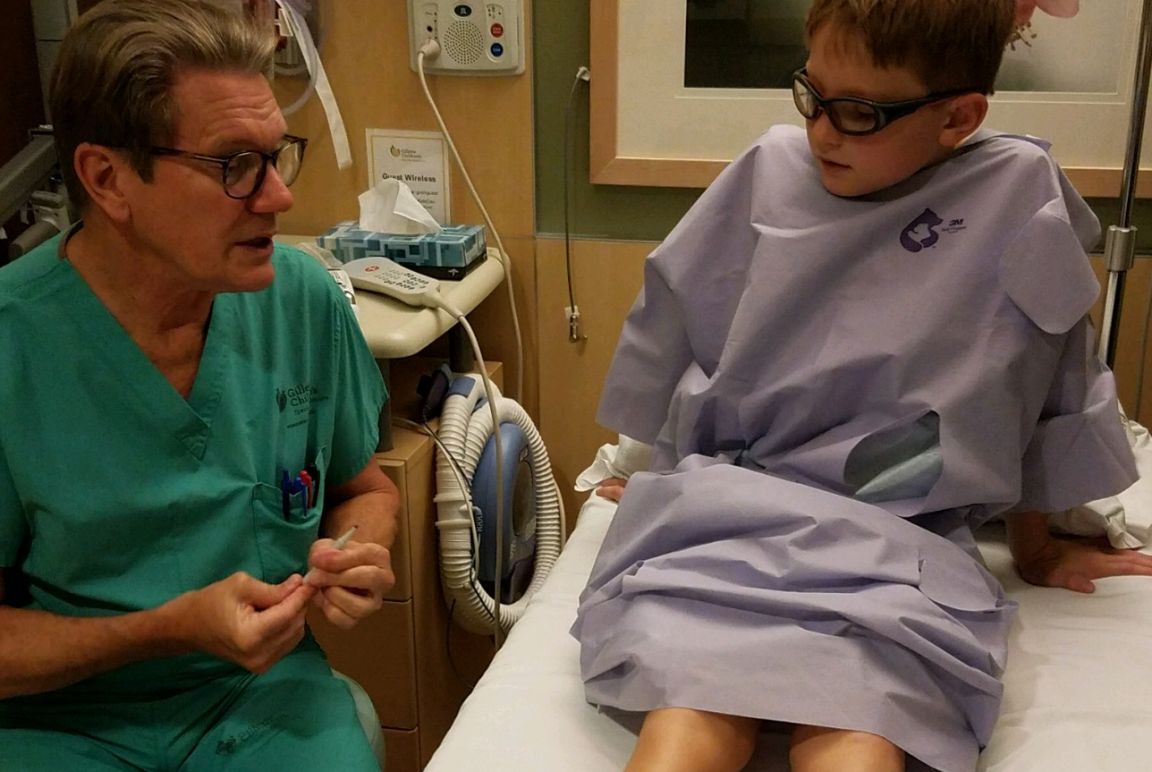 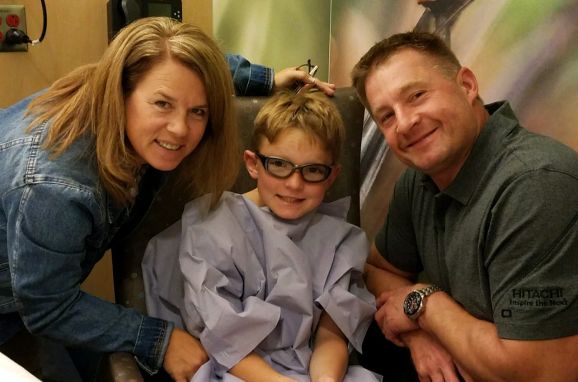 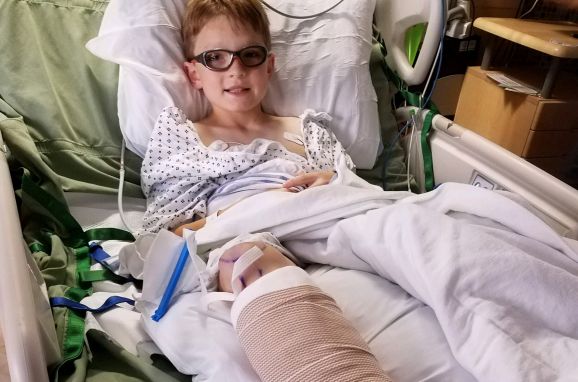 Jill: Dr. Dahl did a drawing for Toren to better explain the procedure to him. He would have a double osteotomy and that would involve breaking two parts of his leg—his femur and tibia, rotating the bones, and then putting it all back together with pins and plates. The sound of that would scare a lot of people, but Toren’s a very thoughtful and methodical kid. He was very interested in the details of the surgery. It was his leg Dr. Dahl was talking about after all, so he wanted to be involved in the decision making.

Toren: What I liked about Dr. Dahl is that he was very smart and made me feel very comfortable talking to him. He gave me a lot of his time and never made me feel rushed. If I had questions, he was there to answer them.

Travis: It wasn’t all for surgical procedures, but Toren had been put under anesthesia 11 times prior to this surgery, so as parents we just tried to reassure him of how well he’d done as a baby and that this time would be no different. He was incredibly brave about all of it and I can’t tell you how proud of him we were (and are) about how he handled things.

Jill: When we got Toren’s diagnosis there was a part of me that felt like: “Toren has been through enough medical procedures in his life, now he has to do this again?” Having a child that requires surgery never gets easier as a parent. But our faith in God and trust in the training and expertise of Dr. Dahl and the staff at Gillette made that easier for us to do again.

Travis: We’ve been through this, or things like this before. When it’s your child, it’s never something you get used to. But during those times, you do learn how best to deal with it. When to ask questions, when to be quiet and when to be an advocate for your child. I feel confident in saying that at Gillette, our primary concern was to not worry about the medical stuff as much as just taking care of our son.

Everything That Comes Next 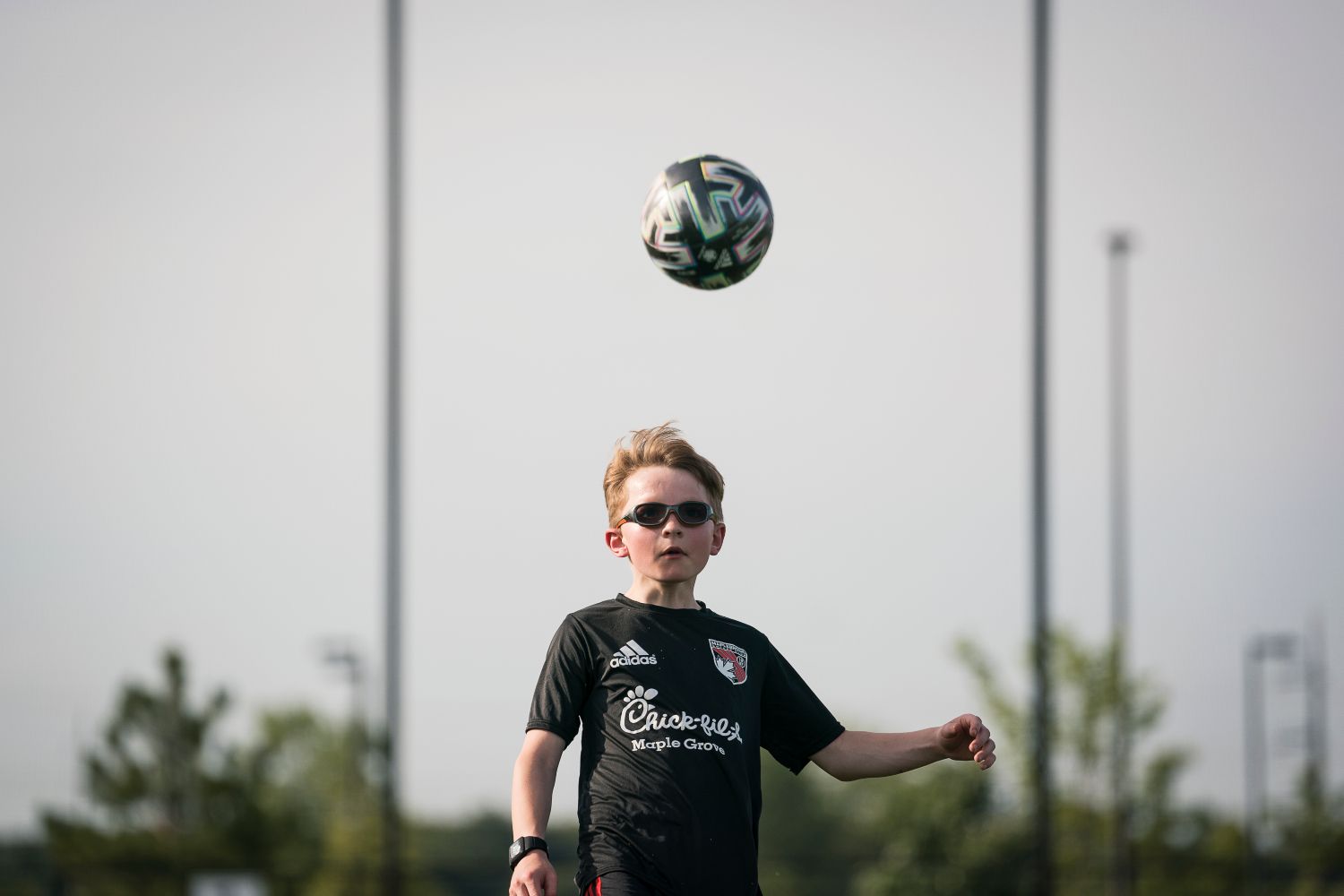 Toren’s procedure with Dr. Dahl went well. He stayed at Gillette for two days following his procedure and was able to go home. He wasn’t able to return to his active lifestyle (and most importantly, gym class), for four months. Upon his return, he did so with no restrictions and has lived his best life since.

Jill: I do remember him saying, “Mom, I just want to go back to gym class,” but what we’ve really admired about Toren during this time is that he hasn’t complained once. He endured the wheelchair, crutches and eventual recovery with grace. Needless to say, we’re quite proud of him.

Travis: Toren missed half of the downhill ski racing season at Afton and still placed in the Top 10 in his age group. Given what he’d been through, that was a remarkable achievement.

Removing the Hardware and Moving Forward

This winter, Toren got to go back to gym class and skiing, along with playing on his soccer team this past summer. COVID-19 has certainly complicated things for everyone, but either way, Toren’s future looks bright. He recently had surgery at Gillette to remove the 10 pins and two plates that were placed in his leg during his initial procedure. He will be sidelined from sports for a time to recover, but the surgery went well and as they always will be, Dr. Dahl and the staff at Gillette were there to care for Toren and his family. 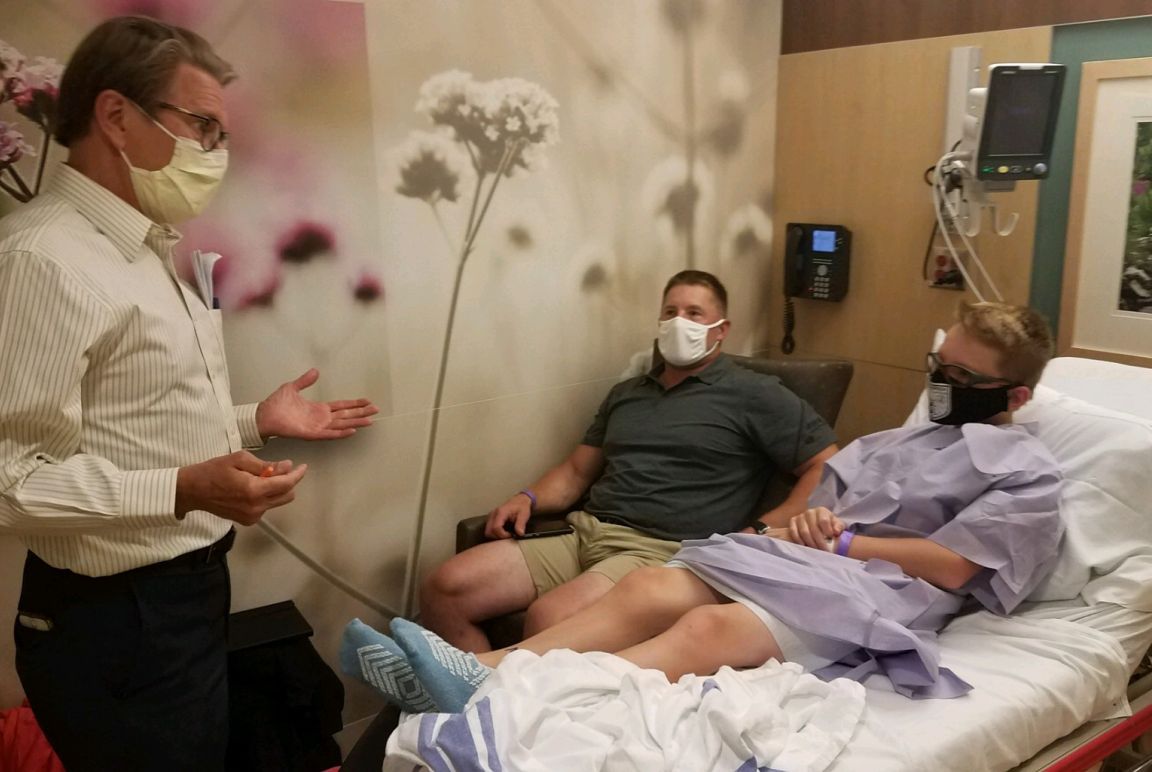 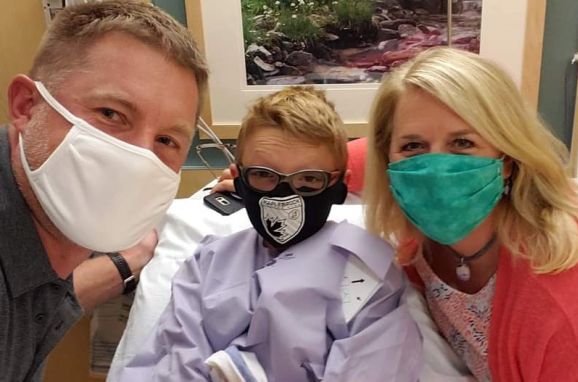 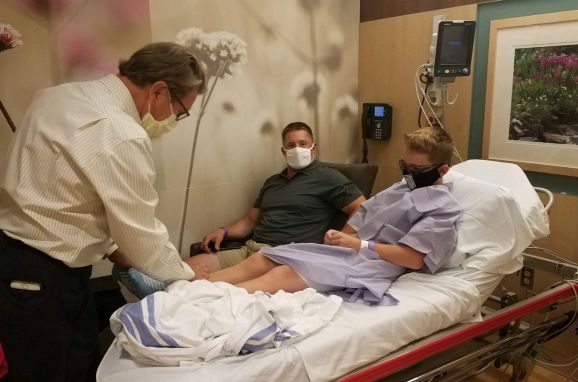 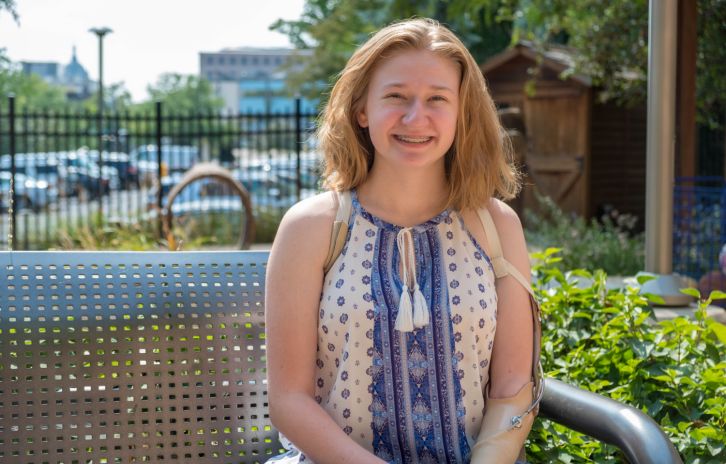 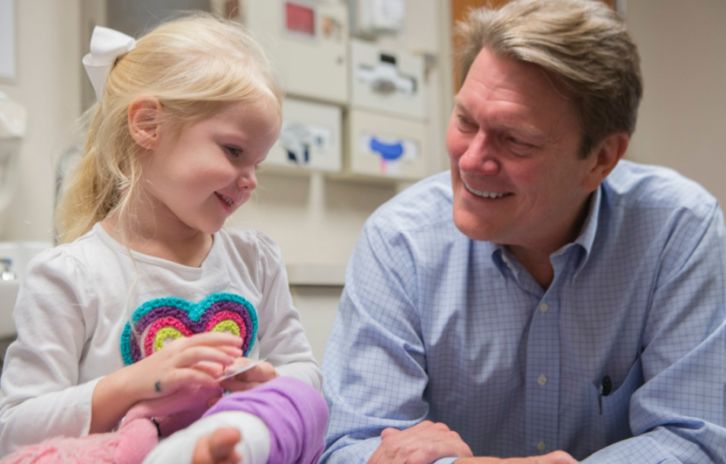