“She’s a warrior,” says Rachelle Lavalier of her confident and spirited daughter, Maddy. “She doesn’t have any barriers, and that’s an important part of who she is.” Lavalier calls 8-year-old Maddy the bravest person she knows—her hero.

Even as a baby, Maddy proved that her vibrant personality, rather than her medical condition, would shape the course of her life. You see, Maddy has spina bifida. But she also has so much more. Extraordinary compassion. A keen and often-sarcastic sense of humor. The uncanny ability to engage with everyone she meets.

“Maddy has this way of drawing people in,” says Lavalier, who calls her daughter her best friend. “She cares about every individual uniquely.”

Experts Provide Comfort Amidst Uncertainty
Lavalier was just 21 years old when she learned her baby would be a girl. An instant later, the ultrasound technician’s ominous words thrust her into the unknown. “I remember hearing, ‘It’s a girl!  And now the doctor’s going to come and talk to you,’” recalls Lavalier. 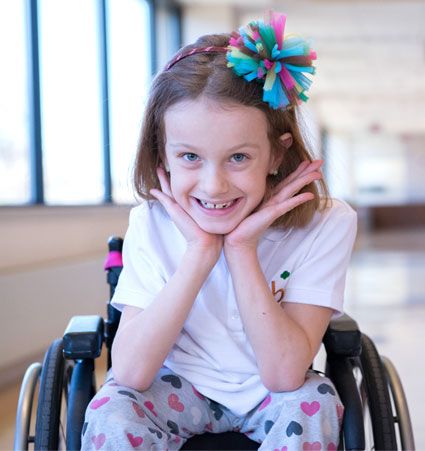 Further testing revealed Lavalier’s unborn baby would face a host of health concerns, including spina bifida, bilateral clubfeet, and an omphalocele—an abdominal wall defect in which the intestines, liver and other organs develop in a sac outside the body.

In the difficult weeks following the news, Lavalier met with Michael Partington, M.D., a pediatric neurosurgeon at Gillette Children’s. “He explained what this could look like, from best-case-scenario to worst-care-scenario,” remembers Lavalier. “He injected humor at the right times and concern at the right times.”

Transforming Challenges into Opportunities
Maddy underwent three major surgeries immediately after her birth. She also began seeing multiple Gillette specialists, including Partington. “It was easy to trust the experts at Gillette,” says Lavalier. “They had a perfect balance of expertise mixed with love and genuine care about our child.”

Lavalier says the care and encouragement Maddy receives at Gillette has helped build her confidence. “Without Gillette I don’t know that Maddy would be the individual she is,” she adds. Today, Maddy happily answers questions from her peers about her condition.  She helps them understand her wheelchair, for example, by likening it to her ‘legs.’

Maddy sees her condition as an opportunity to spread a message of empowerment. “Maddy once told me, ‘I’m really glad God created me this way,’” says Lavalier. “She wants to be a voice for other kids who think they can’t do things. She wants to show them everything is possible.” 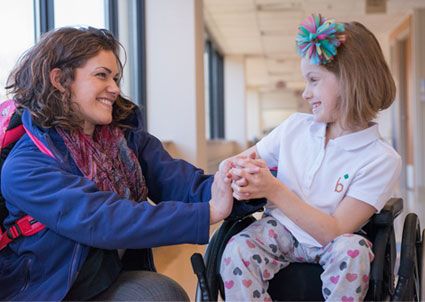 Maddy leads by example, with encouragement from Lavalier. “Anything she has a dream for, or an idea for, I want to help her achieve.  I say ‘OK, you have an idea. Let’s make it come true for you.’” Her dreams currently include becoming a doctor and saving the white rhinos.

Maddy will realize another dream—of becoming that voice for other kids facing complex conditions—when she serves as the Gillette patient ambassador at the hospital’s first-ever Walk and Roll 3K Family Fun Walk on Saturday, June 18, 2016.  She’ll kick-off the event—then join her family and friends as part of the Live Maddy Strong fundraising team. Proceeds from the event help purchase communication devices and adaptive equipment for children who have disabilities.

“Maddy’s circumstances aren’t a barrier to her. She believes they’re an opportunity,” says Lavalier. I know she’ll continue to reach for the stars.”

Click here to start your own Walk & Roll team or support an existing team! 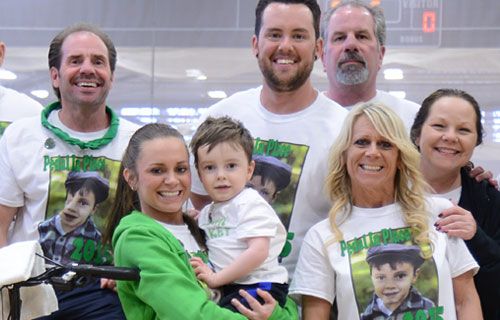