A young mother, overwhelmed with caring for her newborn son who has quadriplegic cerebral palsy, meets a pediatric intensive care nurse in the hallways of Gillette in 2006. The friendship they develop changes both of their lives.

To celebrate National Nurses Week (May 6 through 12) we asked Lucinda VerSteeg and Elee Hruza to reflect on their nursing careers and relationship. They both say their chance meeting 10 years ago was “meant to be.” 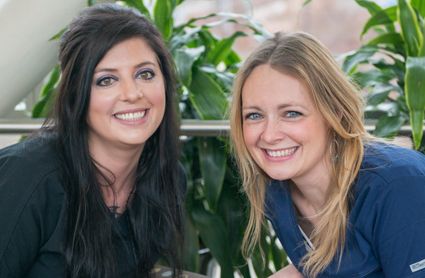 How did you two first meet?

Elee Hruza:  My 10-year-old son, Javier, has cerebral palsy and Lucinda was one of the first nurses who took care of him when he was little. This was before I was a nurse and before I knew anything about anything. I was only 20. I wasn’t interested in nursing and didn’t have any desire to do anything like nursing. Lucinda took care of Javi a lot when he was a little guy here at Gillette.

Lucinda VerSteeg:  Anyone who meets Javier knows—he has you at “hello.” So of course I fell in love with Javi, and with Elee as well. It was love at first sight. I remember meeting Elee, I’ll never forget it, I met her and I thought “she’s going to change the world.”

She was such a young mom and Javi was going through a rough patch and was medically fragile at the time. She was just so dedicated to him.

Elee, how did Lucinda influence you and spark your desire to become a nurse?

Elee Hruza:  Initially, Javier and I had been in rural hospitals that don’t specialize in cerebral palsy and didn’t have the knowledge base. The thing that made an impression on me was Lucinda’s incredible skill level. I thought she was amazing. She knew everything.

But what stood out the most for me was the respect she showed me. I was a young mom and I wasn’t necessarily treated with the most respect at other places. People were telling me how to do things, but they never asked me what I thought about my child.

Lucinda was always so kind and respectful. She cared about my opinion. I thought Lucinda was so open and such a great teacher. I spent time with some other Gillette nurses too and I thought, “Hey, maybe I could do this.”  But in my mind I thought the gap between what I was—a young mom—and the skill level of the Gillette nurses was so far apart. But I decided to try. I went back to school and my goal was to become a nurse like Lucinda. I’m still working on that one.

Lucinda, how does that make you feel—hearing those words about your influence on Elee?

Lucinda VerSteeg: It makes me cry. I just love them. I was just amazed at her. Javi became more stable and years went by. I’ll never forget the day I was working in the Gillette Pediatric Intensive Care Unit and all of a sudden Elee came in with a group of new employees on a tour. I saw her and I just thought “The world makes sense.” I was so surprised to see her, but at the same time I wasn’t.

Elee Hruza: It’s so awesome that you remember that. That is a pivotal moment for me. Lucinda was sitting behind the desk and she was someone in PICU who acknowledged me and I felt cool.

I could not believe I made it. I worked so hard and I get to be a coworker of someone I idolized for years.  So that was a huge moment for me. Javier and I had our lives changed when we met Lucinda. 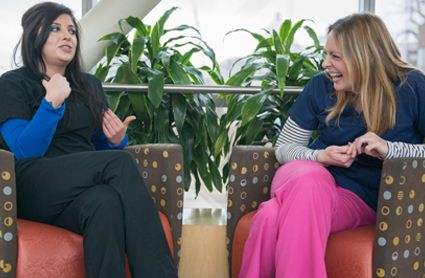 What have you learned from Lucinda as a professional nurse that you try to incorporate in your work as a nurse yourself?

Elee Hruza: Everything! Hospital wide people want to be like Lucinda. She’s so incredibly intelligent and yet so humble.  Lucinda, I never feel stupid asking you a question.  You’re such a great teacher and you’re so knowledgeable. Then you also have the caring and compassion. There aren’t many people that I’ve ever met in my life who are like you.

Can you describe the culture for nurses at Gillette?

Elee Hruza: Some people say we’re like the island of misfit toys! (Laughs)

In my opinion, you’ll never meet a more devoted, loving group of people.  I’ve traveled a lot and I’ve looked for them.  I’m like an explorer trying to look for dedicated people.  The people who work at Gillette are so genuinely good. I trust these people with my son’s life. You know it’s not just his life—it’s his health, happiness and well-being. He loves coming to the hospital. I think a lot of our kids like coming here because there’s so much love. It’s an amazing place to work.

Lucinda VerSteeg: At the heart of it all—we really love our patients. We see these kids grow up and have a nice relationship with families. We get to watch them change. We get to spend Christmases together and birthdays. We’re here for big events. Even if it’s painful we work through it together.

Elee Hruza: You’re part of people’s lives and I think it’s an honor to be part of their lives. It’s an honor to be welcomed into these families. This leads to a culture of gratitude and humility. When you work with people who have significant health challenges you can’t be around them and not be humbled.