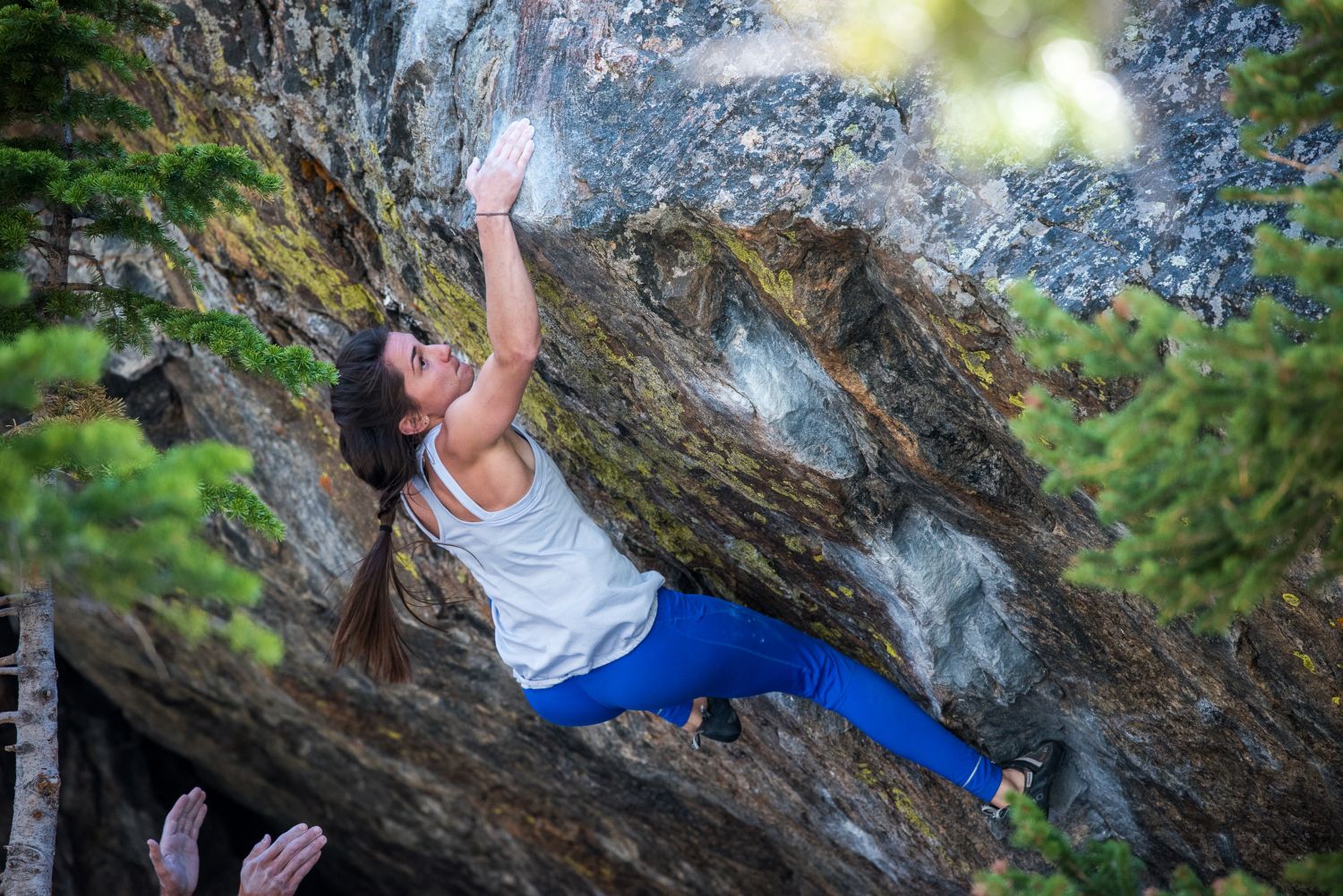 In just over a month, Kyra Condie will be competing as a climber in the Summer Olympics in Tokyo, Japan.

It will be the first time climbing has been featured as an event in the Olympics and for her, a tremendous personal achievement and milestone she’s been working towards her entire life.

All of this would've happened last year, but the outbreak of COVID-19 postponed the games. Kyra is from Shoreview, Minnesota, but now lives and trains in Salt Lake City, Utah. At the beginning of the pandemic when her local training gym closed their doors due to quarantine, Kyra borrowed an assortment of climbing wall holds from her gym to construct a makeshift training wall in her attic.

She kept training, because when you’re an Olympian, or Kyra, that’s what you do.

Kyra Condie, training in her attic at her home in Salt Lake City, Utah.

In a time where the world was being deprived of many vestiges of normalcy, the loss of major sporting events stung particularly harshly. For a great number of individuals, these events signify our relationship with time and the changing of the seasons.

Sports hold up a mirror to life. They highlight and exemplify individuals overcoming obstacles and barriers both real and imagined. When it comes to climbing, the barriers are literal: There’s a physical wall in front of you and you have to find a way to climb it. The goal is both simple and breathtakingly difficult to accomplish.

Failure is not only an option, it’s commonplace.

When you fail, you fall. If you’re good at it, that just means that when you mess up, you do it from a higher height.

There’s a grueling aspect of climbing at an Olympic level. It’s not for the faint of heart, but Kyra is anything but that. She’s well acquainted with being tested and overcoming setbacks. She knows what it’s like to fall, adapt and come back stronger. She’s been doing it all of her life.

A Diagnosis of Adolescent Idiopathic Scoliosis

“I think I was about 11 or 12 when the back pain really started to bother me,” Kyra says. “The pain was relatively minimal and it wasn’t something I couldn’t push through, but it was just a nagging issue that persisted. I was an active kid and was climbing constantly, so it was the sort of thing you could explain away. But it became impossible to ignore.”

Kyra eventually consulted a physical therapist at her local gym who suggested she speak to her parents about setting up an appointment for a medical consult.

When they did, the news was grim. The consult revealed that Kyra had severe adolescent idiopathic scoliosis (AIS) and that her spine was curved into an S-shape at a degree of 52 degrees. Generally, if the curvature of the spine exceeds 50 degrees, it will require spinal fusion surgery.

“My family began looking for a facility to perform the surgery in Minnesota, and I’ll never forget the first appointment. They basically told me that following surgery, my climbing would be over,” Kyra says. “As you could imagine, I was upset and crying. I mean, I was 12 and this activity that I had fallen in love with was going to be taken away. It was then that the medical provider told me that it would be ‘OK,’ and that I would be a wife and mother one day and that in the grand scheme of things, climbing wasn’t that important. I kind of stopped listening at that point.”

As Kyra would say and time has shown, it turns out that climbing IS very important to her. But at her second opinion, she and her family received a similar prognosis. It was advised that she have 12 of her vertebrae fused, which would require a nine-month recovery and effectively end any of her aspirations to climb competitively going forward.

It wasn’t until her third opinion from John Lonstein, MD, at Gillette Children’s in St. Paul, Minnesota, that Kyra and her family heard any good news.

“Our appointment at Gillette was different from the start. We met with Dr. Lonstein right away. He did the examination and was just incredibly positive,” Kyra says. “We told him about my previous appointments and he proposed a procedure that would fuse 10 of my vertebrae rather than 12. He said I would have a four-month recovery period. After my surgery and recovery, he told me to send him a picture of me on top of the podium of the next climbing competition I won. Hearing that, we knew that Gillette was where we wanted to be.”

Dr. Lonstein began working as a spine surgeon at Gillette Children’s in 1972 and retired in 2015. He served as a mentor to many of the orthopedic surgeons currently working at Gillette and treated countless patients there throughout the course of his career.

“Our initial consult was years ago, so I don’t remember every detail about it. But asking her to send me a photo of her on top of the podium at her next event? That certainly sounds like me and something I’d say,” Lonstein says jovially. “I recall that Kyra and her family were fairly tainted by the consults they had prior to arriving to Gillette, and I think our appointment really gave her hope and permission to believe that she could come back from this and still do the thing she loved to do.” 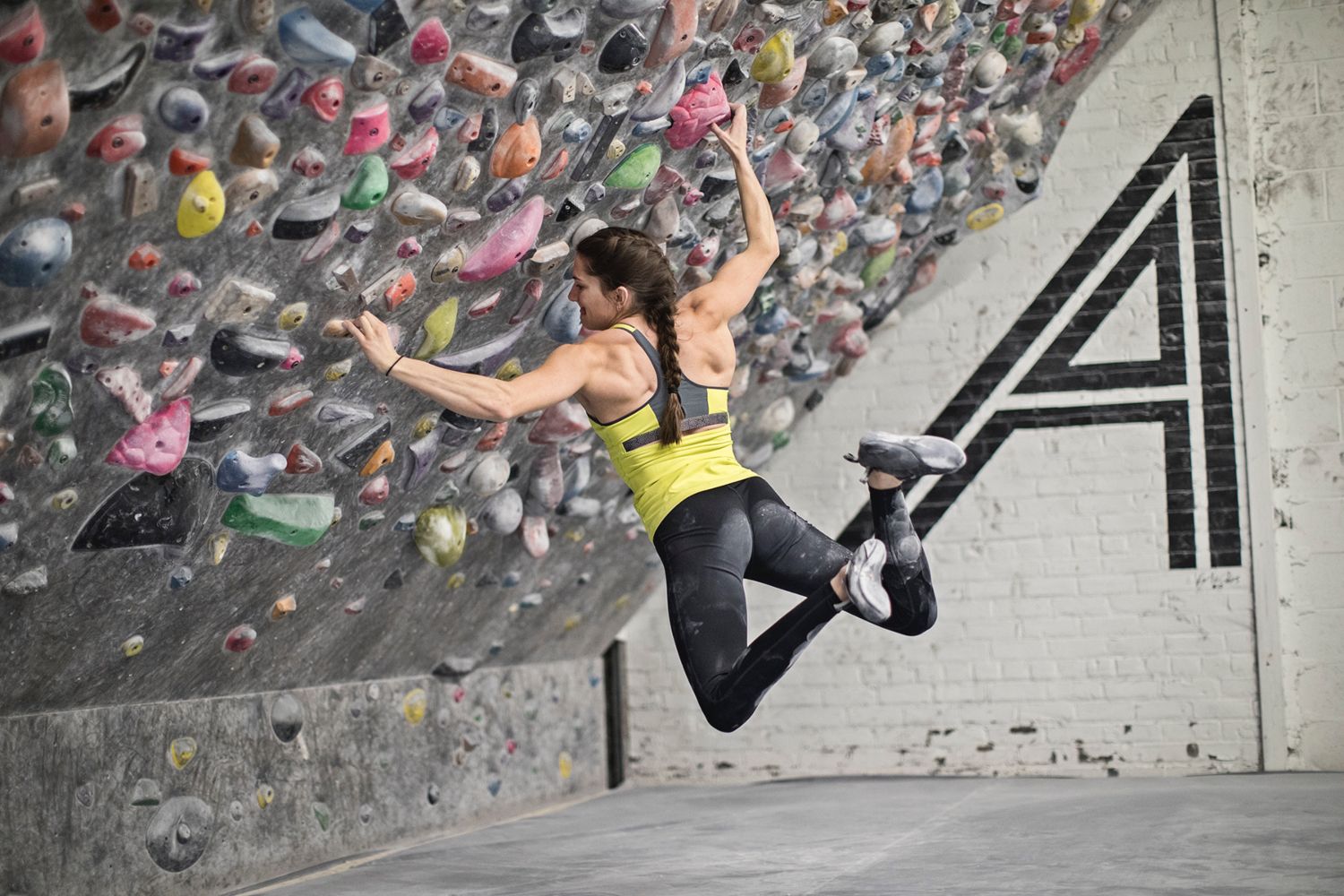 “Dr. Lonstein delayed my surgery so I could compete in the Bouldering National Championships in 2010,” Kyra says. “I’m a competitive person. Following surgery, I wanted to have the fastest recovery possible.”

Kyra spent two nights in the hospital following surgery. She was out and at home on the third day. Four months later, she was back climbing.

“Most of the success that I’ve had climbing didn’t really happen until after my surgery,” Kyra says. “I think I was already pretty dedicated to doing the training, but there was something about it being taken away that really motivated me and changed my mindset. I couldn’t do anything about having scoliosis, but I could do something about how I came back from it.”

A Singular Motto of Daily Improvement

“At The A, the gym in Minneapolis where I first started training when I was 11, they have, ‘YOU SUCK TRY HARDER,’ spray painted on the wall,” Kyra says. “Some might interpret this negatively, but I didn’t. Especially following surgery, it’s something I really embraced. I think everyone has had moments when they’ve felt down or not like the best version of themselves. For me, I’m always working to be a little bit better each day. Whether I’m doing well or terrible, that motto has been a constant reminder for me to stay humble, work hard and remember my roots.”

For his part, Dr. Lonstein has enjoyed following along with Kyra’s progress over the years.

“I’m incredibly proud of how Kyra threw herself into her recovery process, but everything that’s happened since then has been all her. She got herself where she is today,” Lonstein says. “Gillette has changed a great deal over the years, but what’s been consistent has been our primary goal, which is to help our patients reach their maximum potential. Kyra qualifying for the Olympics following spinal fusion is a remarkable example of someone doing just that.”

Lonstein's approach to spinal surgery is part of how he trained other spine surgeons. Lonstein mentored Gillette spine surgeon Tenner Guillaume, MD, another spinal surgeon at Gillette who trained under Lonstein for years. He says that Lonstein’s influence has played a large role in what makes spine care at Gillette unique from other medical facilities.

“John was a mentor to me and I consider him a close friend,” Guillaume says. “What I always appreciated about John was how much time and care he took in getting to know his patients and their families. He’s an excellent listener. At Gillette, it’s our goal to preserve and enhance the abilities of our patients. That’s the way John always went about things. Whether our patients required bracing or at some point, surgery, he’d go out of his way to tailor the care provided around the specific activities, goals and aspirations of his patients. It’s an honor for me and all who work on the spine team at Gillette to continue that legacy and world-class level of care and treatment.”

A Resolve Undeterred and Irrepressible 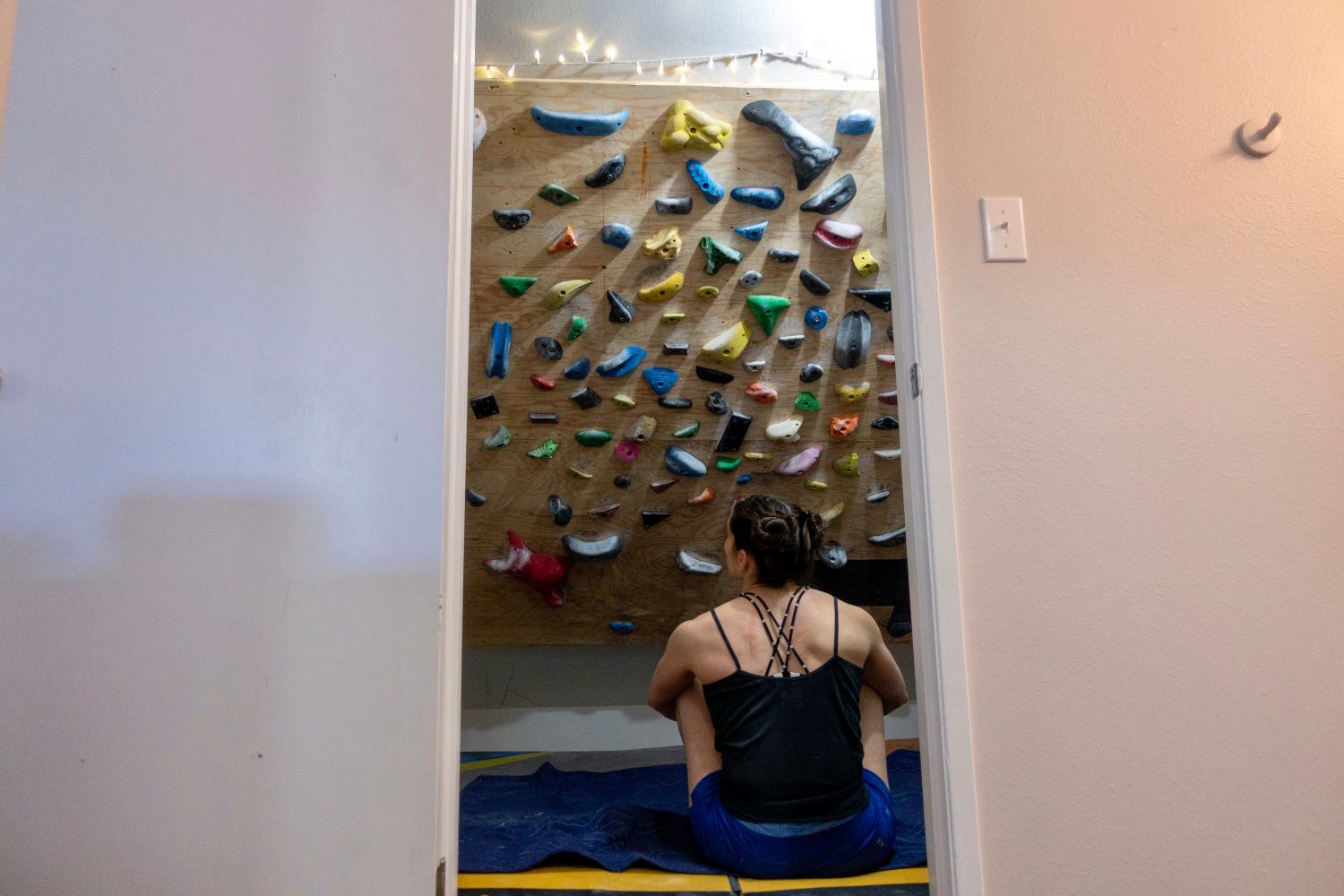 As for Kyra, she’s still training, and with the lifting of COIVD of the restrictions over the past months, is no longer confined to doing so in her attic.

While climbing is her primary focus, Kyra has been enjoying spending time exploring the outdoors around her home in Utah. She recently celebrated her 25th Birthday, is the proud owner of two cats and hopes to go to Veterinary School in the future.

For now, the daily grind continues, but she's very much looking forward to representing her country, Shoreview and the State of Minnesota in the Summer Olympic Games.

“Obviously, I was looking forward to competing in the Olympics, but I learned pretty early on in life that you can’t always decide when things do or don’t happen. I consider myself lucky that I’m competing at all,” Kyra says. This past March was the 11-year anniversary of my surgery, and I’m incredibly thankful to Dr. Lonstein and the team at Gillette for guiding me through what was a difficult time in my life. I know that things have been tough for everyone, but I try to see the positive when I can. The Olympics getting delayed wasn't great, but the way I chose to see it at the time was that I had another year to train and prepare.”

Needless to say, this coming July, Lonstein, Guillaume, and the entire Gillette family will be cheering Kyra on. 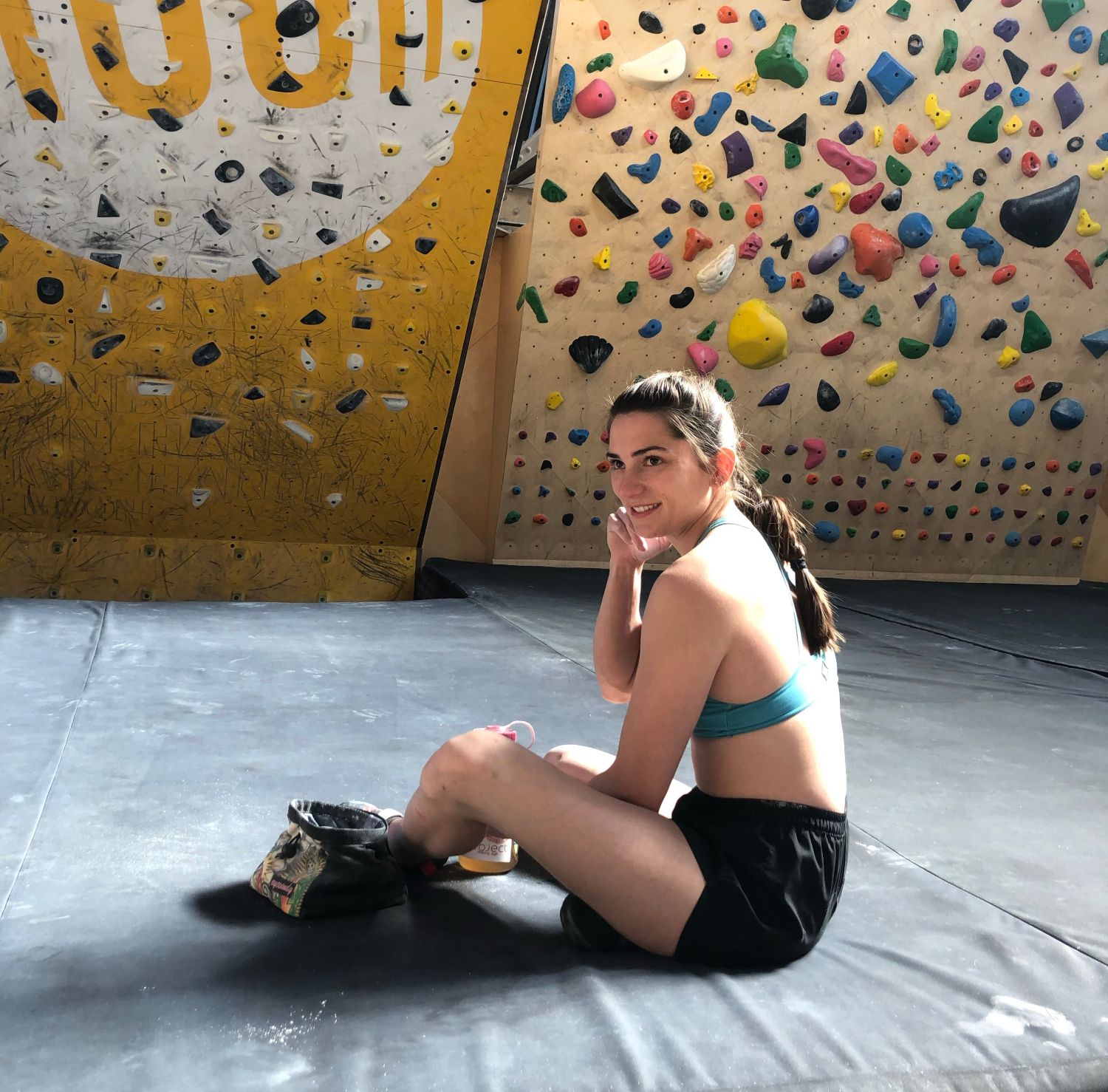 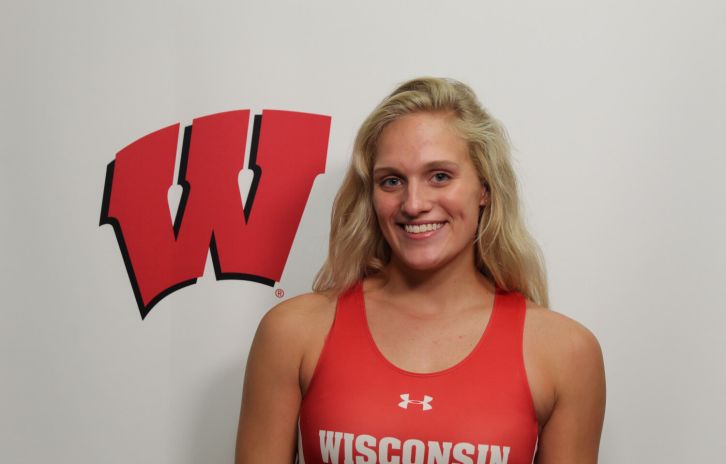 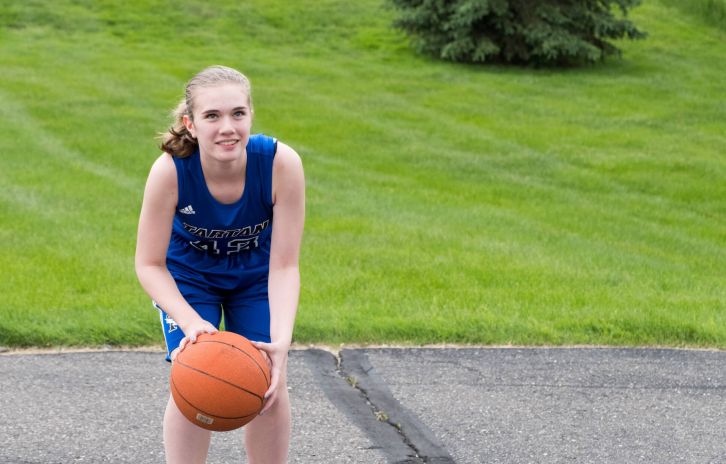 Erika Comes Back After Spinal Fusion

"I realized, for the first time, that I was shooting straight. Due to my scoliosis,… 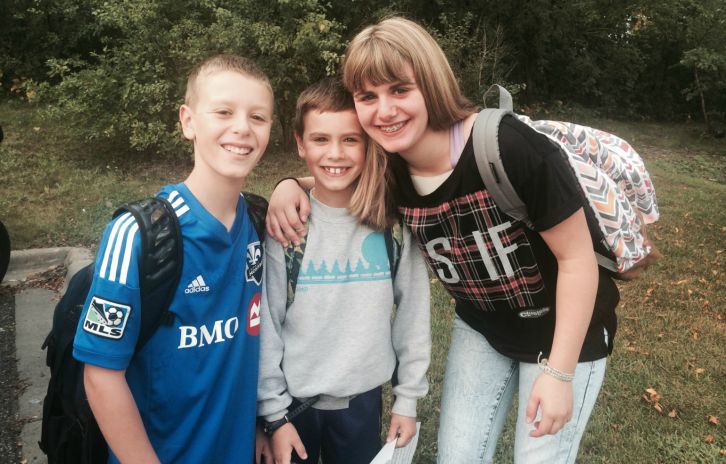 After Scoliosis Treatment, Avital Aims to Help Other Kids

After a surprising scoliosis diagnosis, Avital Harris wore a back brace for two years. Now…