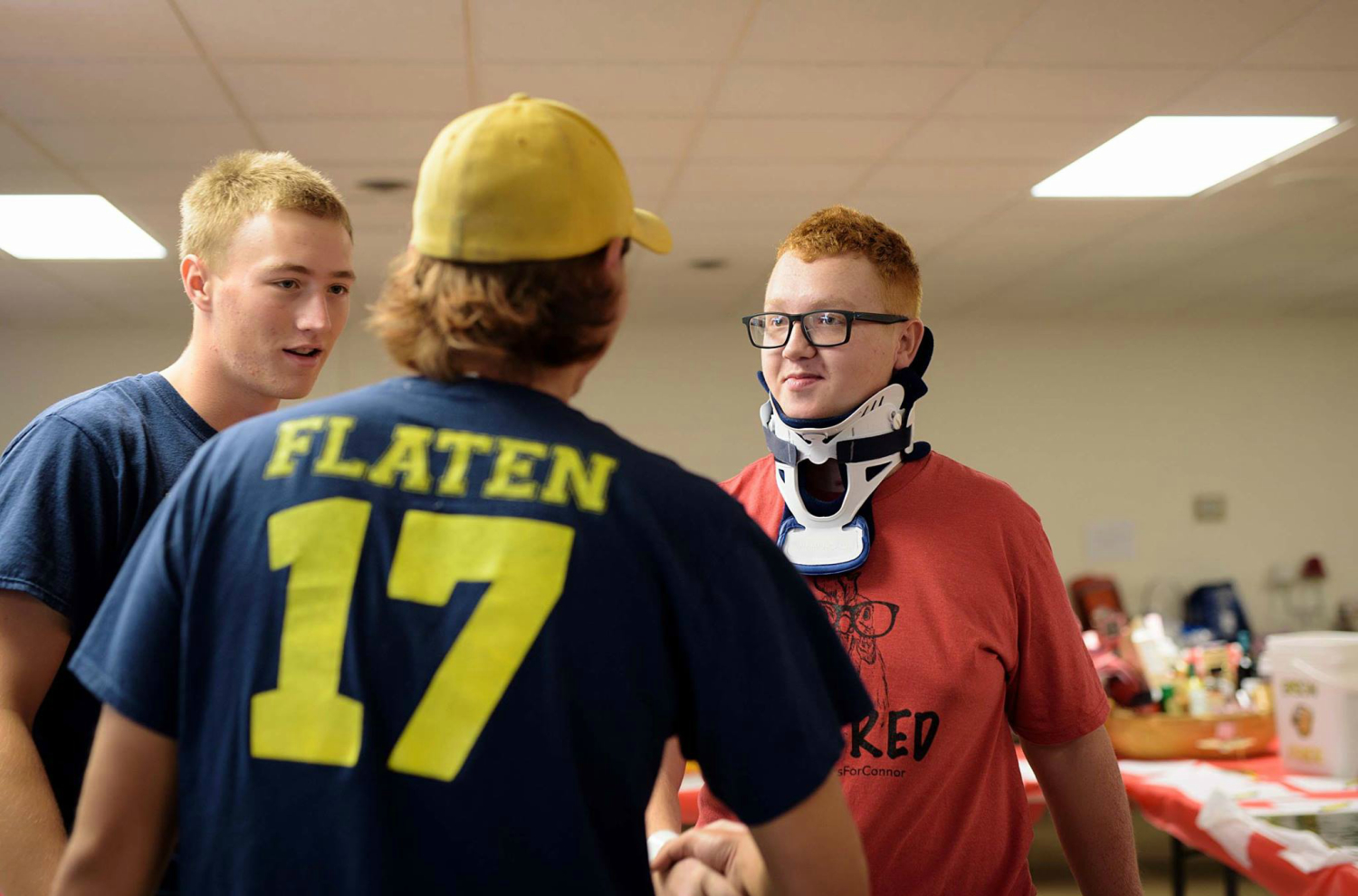 “You know, the food is actually pretty good.”

Connor Flaten, 17, sits up after lounging on a chair a few feet away from his hospital bed at Gillette Children’s.

Tall, red-haired and boisterous, it’s not a surprise to learn that he plays on the football team back in North Dakota, or that he’s pretty popular.

This is a kid that just months earlier stood on a stage in front of hundreds of people and sang “My House” by Flo Rida, and if we’re being honest, he was shockingly good. But when asked about his favorite song at the moment, he responds, “Easy, ‘I Want It That Way’ by the Backstreet Boys.”

What about NSYNC? “No, not an NSYNC guy. Backstreet Boys,” he confirms.

At this point, you may arrive at the pertinent question: Who is this kid?

Connor’s mother, Donna Flaten, will tell you he’s definitely a bit of a character, but she’ll also tell you that after the summer they’ve gone through, the fact that Connor is well enough to have a Backstreet Boys v. NSYNC debate is a bit surreal. On June 18, 2017, a week after Connor’s infamous Flo Rida performance, he was in a serious car accident.

Connor suffered a severe traumatic brain injury (TBI). He was in a coma for three weeks.

After the accident, paramedics airlifted Connor to a hospital in Fargo, North Dakota. For his family, it was a shock to say the least. 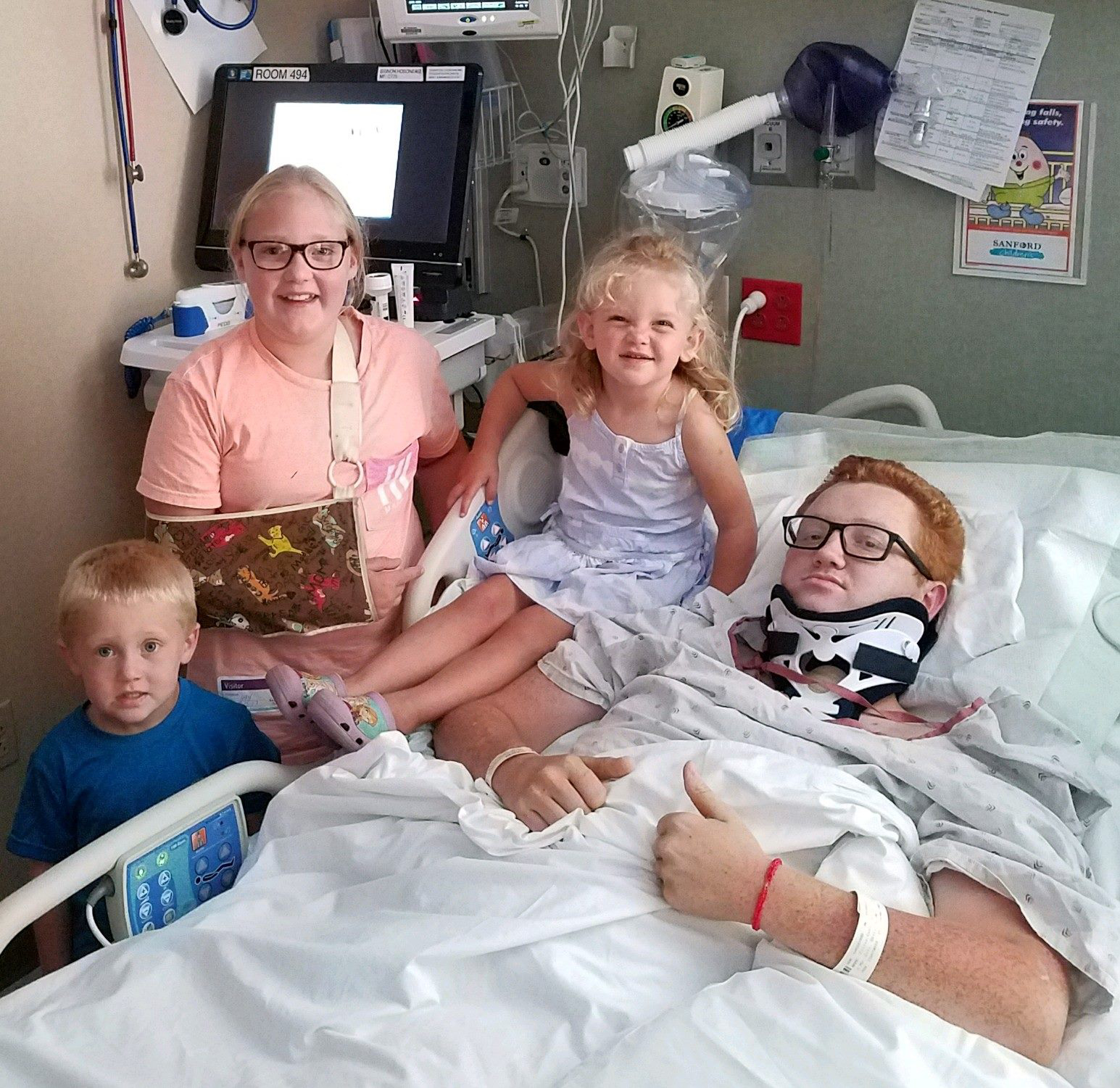 “The doctors estimated that Connor might be unconscious for weeks,” Donna recounts. “They said the only consistent thing about a TBI is that they’re all different. The waiting and the uncertainty was like torture.”

When your son is in a coma, even a minute away from the hospital can feel like a lifetime.

“Connor’s father and I practically lived in his room,” Donna says. “But after 20 days of being unresponsive, Connor opened eyes, looked up at his father and said, ‘Hi Dad.’ It brought tears to his eyes.” 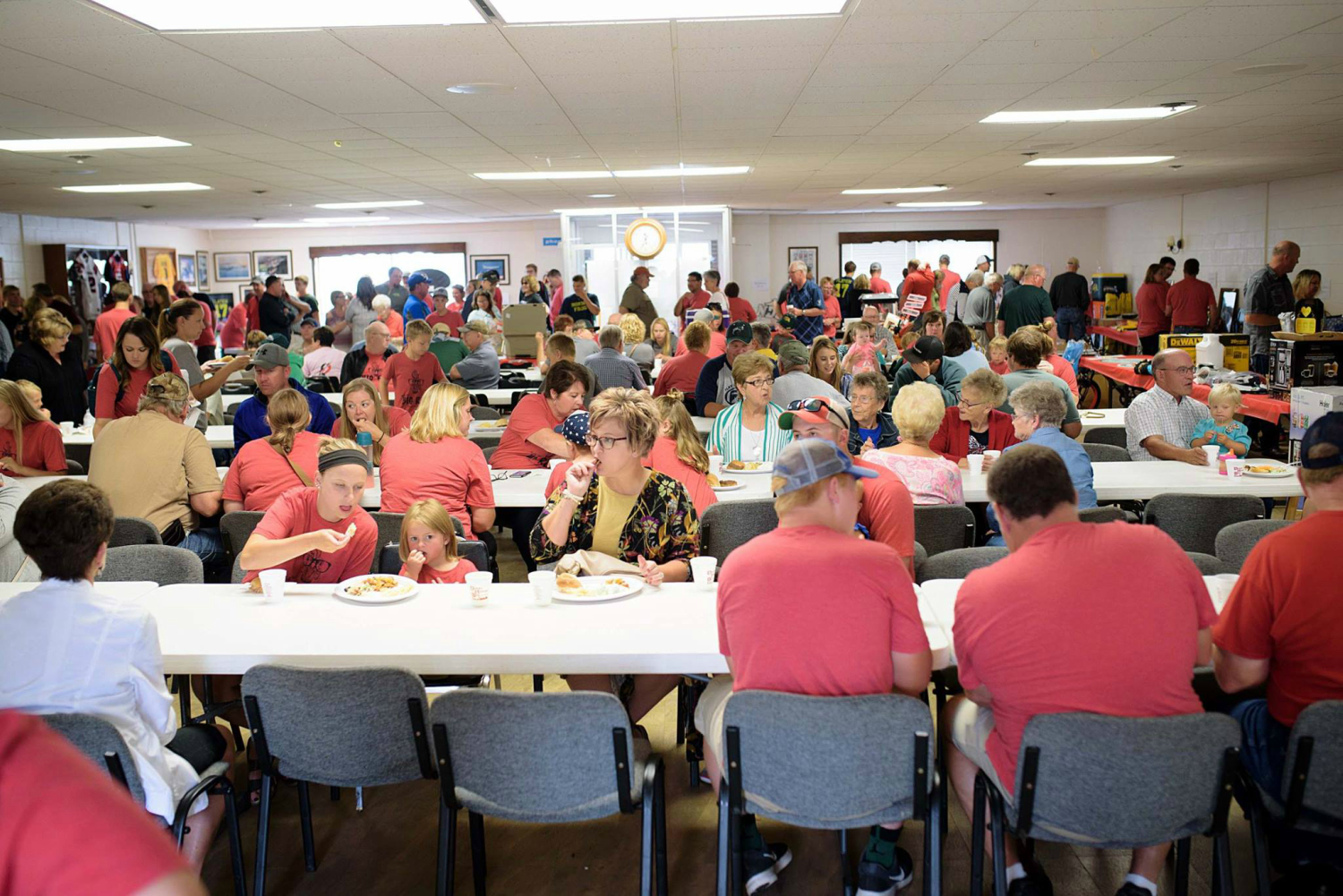 The thing about being in a traumatic accident—especially if you live in a rural area— is that you don’t always get a lot of options about where you’re going to receive care. The Flatens live in Hope, North Dakota, population 265. Connor goes to school at Hope Page High School. There are seven people in his graduating class.

“There used to be eight, but one girl transferred,” Donna laughs. “It’s a wonderful place to live, but for the type of rehabilitation Connor would require, we knew that we might have to travel.”

During their search for an inpatient rehabilitation treatment center, Donna and her husband Curt made the five-hour trip to Gillette in St. Paul, Minnesota.

“After meeting with the team at Gillette and seeing the facility, we made the decision before we left the parking garage,” Donna says. “We knew that Gillette was where Connor needed to be.”

Two-a-Days Every Day, One Day at a Time

“Working in the inpatient rehab unit is never boring,” says Amy Authement, MD, one of the specialists who worked with Connor during his month-long stay at Gillette. “Every patient is at a different point in the recovery process, so a big part of our job is to educate our families and help manage their expectations.”

When it came to Connor, Authement says the entire staff was impressed by how hard he worked.

“They told me I had to give 110 percent, but I gave them 120,” Connor says confidently. “This was right around the time I would’ve been starting two-a-day football practice with my friends at home. I tried to look at my therapy like practice, knowing the harder I worked the faster I’d get back to them.” 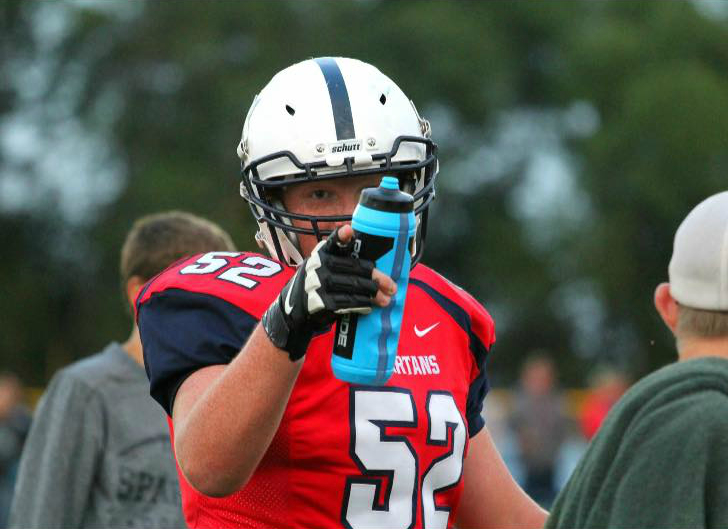 Connor’s positive attitude had an effect on the entire unit.

“Everyone loved working with Connor,” Authement says. “At one point one of our patients jokingly claimed, ‘That Connor gets all the attention.’”

Connor would neither confirm nor deny this was the case. But you can probably guess whether or not it was true. 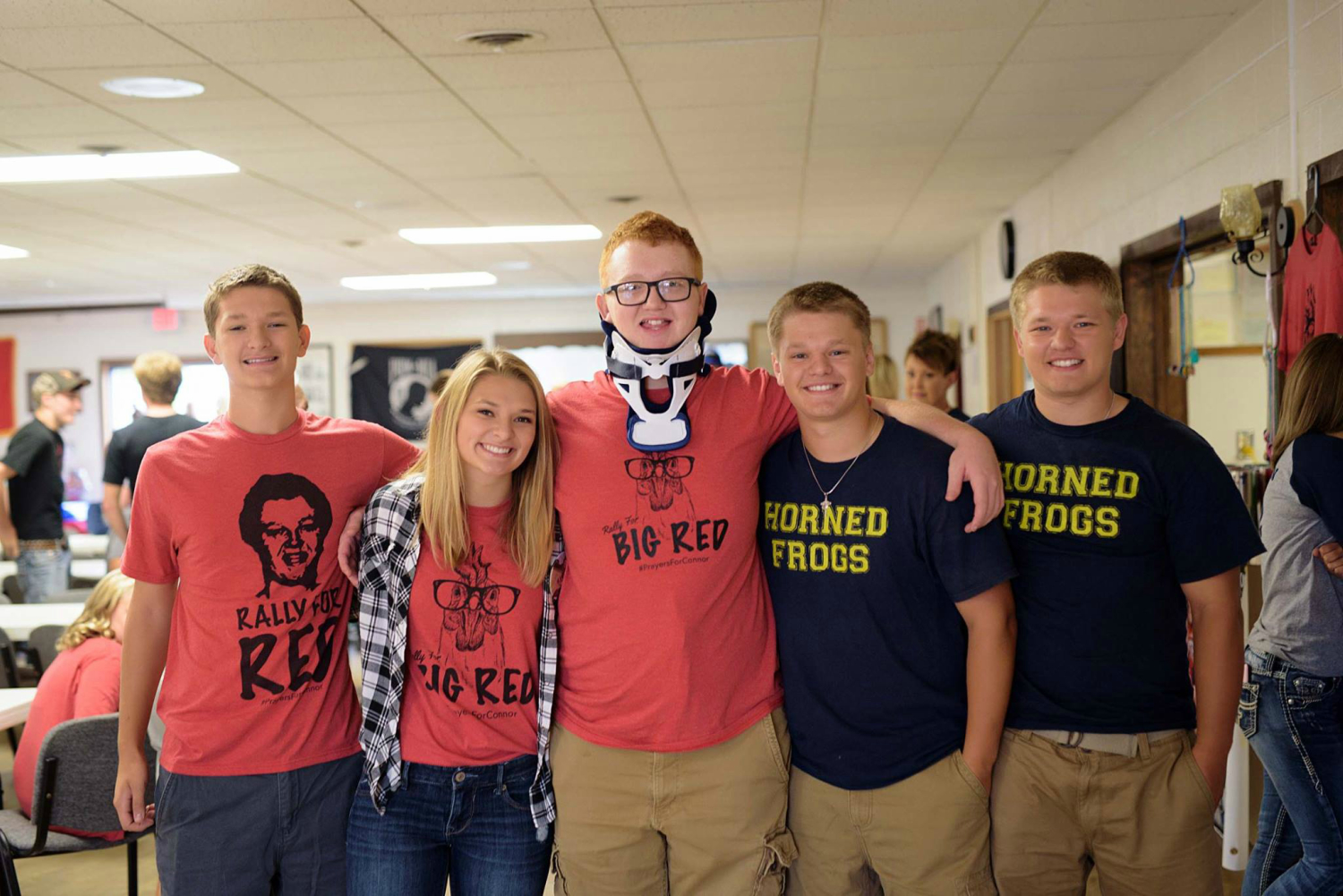 “The thing about living in a community like Hope is that for good or ill, everybody knows everybody,” Donna says. “When Connor had his accident the whole community came out to support him.”

This past July, Connor received a weekend pass from Gillette. During his furlough at home, the town of Hope threw a benefit in his honor.

“Everyone was there. Everyone,” Donna says. “There wasn’t just one, but four different T-shirts that were designed and sold to help pay for Connor’s treatment.”

Click to open image gallery Connor’s Community Comes Out to Support Him, image 1

Click to open image gallery Connor’s Community Comes Out to Support Him, image 2

Click to open image gallery Connor’s Community Comes Out to Support Him, image 3

One week later, after returning to Gillette to complete his therapy, Connor walked out of the hospital under his own power. He recently started his first day of senior year on time and on-track.

“After the summer we’ve had, the fact that things are getting back to normal is just such a blessing,” she says. “We owe so much to Gillette for helping us get to where we are today. In Hope, we live in a small, interwoven community, and I think that Gillette is very much that type of place. The staff there invested in our whole family and made the hospital feel like a second home. It didn’t begin or end with the medicine. They were there for us in all of the ways we needed during our time of trial, and we can’t thank them enough for giving us our son back.”

Connor has also been present on the sidelines at the first football games of the season. He won’t be able to play this year, but he’s still a captain of the team. 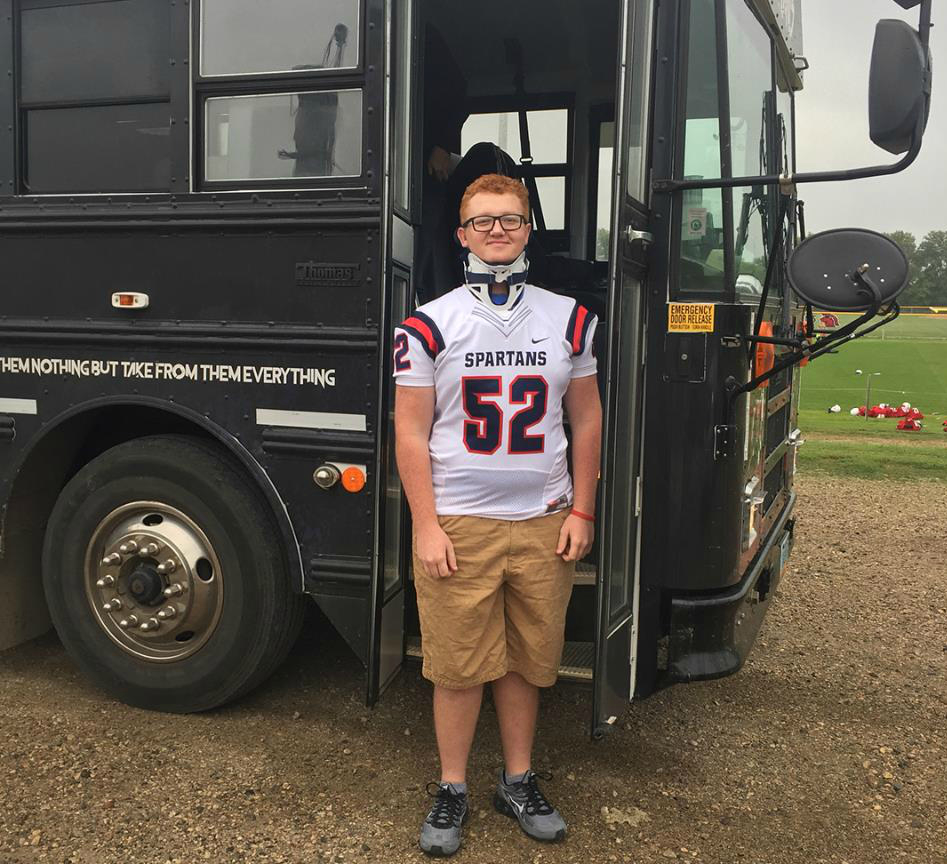 A special thanks to Lisa Aamold for providing the photos for this article.

"If there is anything that I want people to understand, it’s that parents who have children who have disabilities want what any parent wants for their child."

The icy conditions on sidewalks and roads means more people will slip and fall and possibly sustain a Traumatic Brain Injury (TBI). Parents of children who have a TBI know the frustration of dealing with a disability that often seems invisible to the world.