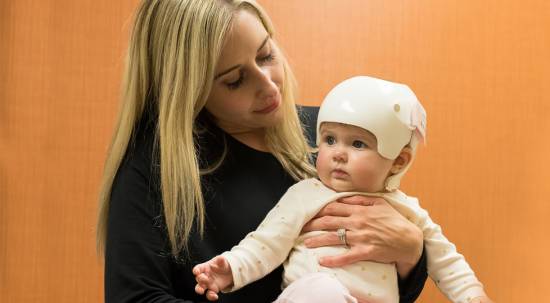 Deformational plagiocephaly, or flat head, is a condition in which a baby’s head has an uneven or irregular shape caused by external forces.

A flat head is often associated with another condition called torticollis. Torticollis occurs when the muscle on the side of the neck gets shortened or tightened. Simple deformational plagiocephaly can often appear to be a more serious condition, such as craniosynostosis. There is no known evidence that deformational plagiocephaly in the absence of craniosynostosis affects a child's intellectual development.

Deformational plagiocephaly can occur while a baby is still growing in the uterus. It can also develop after birth.

Before delivery, a baby drops into the mother’s pelvis. If it happens too early, the baby’s head might rest against a flat surface, where it can build pressure and cause flattening. Infants at greater risk for this occurrence include unusually large babies, breech babies and multiple birth babies.

Other causes of deformational plagiocephaly before birth include:

After birth, deformational plagiocephaly can occur if a baby frequently lies in the same position. As the head begins to flatten, it naturally rests on that flat area, potentially worsening the problem.

The American Academy of Pediatrics (AAP) Task Force on Infant Positioning and Sudden Infant Death Syndrome (SIDS) recommends placing infants on their backs to sleep. This recommendation has led to a dramatic reduction in cases of SIDS. Gillette Children’s fully supports this recommendation.

However, since AAP introduced the “Back to Sleep” program in 1992, a flat head in infants has become more common because babies are spending more time on their backs, in one position. To help lower the risk of deformational plagiocephaly while also protecting against SIDS, our craniofacial team recommends continuing to put infants on their back to sleep and frequent “tummy time” during waking hours and play to balance out positioning.

Babies born early might be at greater risk for deformational plagiocephaly because their skull bones are softer than those of full-term babies. Additionally, premature babies often remain in a fixed position during their longer hospital stay, increasing the likelihood of a flat spot developing.

Babies often develop plagiocephaly as a result of muscular torticollis, a condition in which a muscle on the side of the neck is short or tight. Torticollis can limit a baby’s ability to turn toward one shoulder. Over time, turning the head in one direction more consistently can flatten one side of the head.

If your baby has plagiocephaly, you might notice a flat spot on the back or side of the skull. That flatness gives the skull an uneven or irregular shape. You may also notice other facial asymmetries and flatness. This may include the ear on the flat side being more forward than the other. The eye on one side may also appear larger as may the cheek. Because the head naturally rests on the slightly flattened area, the condition can get worse if not treated. 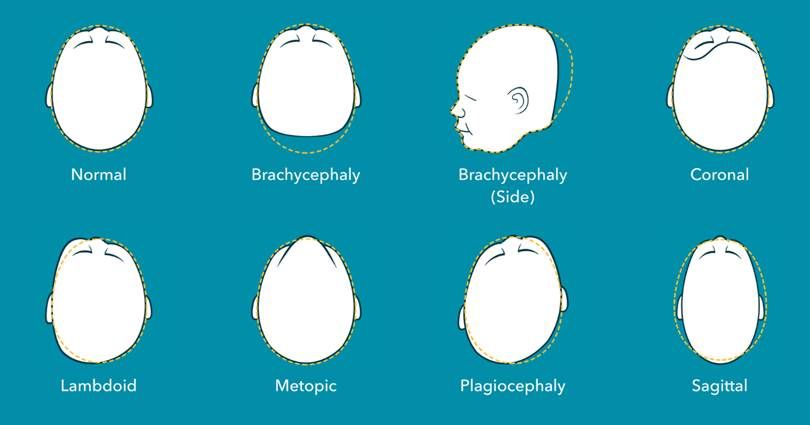 If you or your healthcare provider notice your child has an irregular head shape, the Gillette team of craniofacial experts can further evaluate. By confirming a diagnosis of plagiocephaly we can rule out craniosynostosis, a more serious condition that requires surgery.

Sometimes plagiocephaly corrects itself. But it can also get worse if not treated. We can’t predict whether your child's plagiocephay will correct itself. That’s why we guide families and caregivers in their decision to treat the condition with a custom-made baby helmet called the Gillette CranioCap® orthosis.

Babies who have torticollis, a condition that sometimes accompanies plagiocephaly, might benefit from additional treatment options, including physical therapy. However, alternative therapies, such as chiropractic or other manual techniques, have not been shown to improve deformational plagiocephaly. 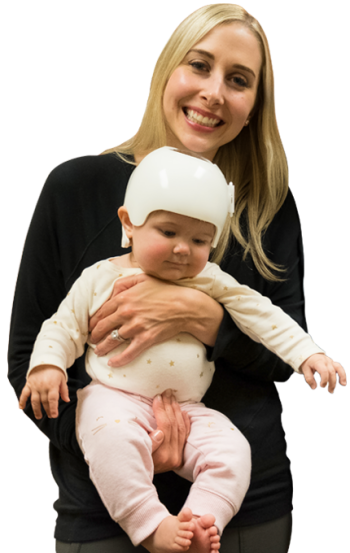 Marlowe Mary Madich is eager to smile, yet surprisingly stingy with her giggles. But her penchant for dancing along to “Shake Your Groove Thing” wins over just about any room pretty rapidly.

If your child has a flat head, the Gillette team of specialists will work closely with you and your family to create the right plagiocephaly treatment plan for your child. Our experts can guide you through the services your child will need.

Your child might receive care from specialists in the following areas related to diagnosing and treating deformational plagiocephaly: