Trust Your Instincts: A Craniosynostosis Journey 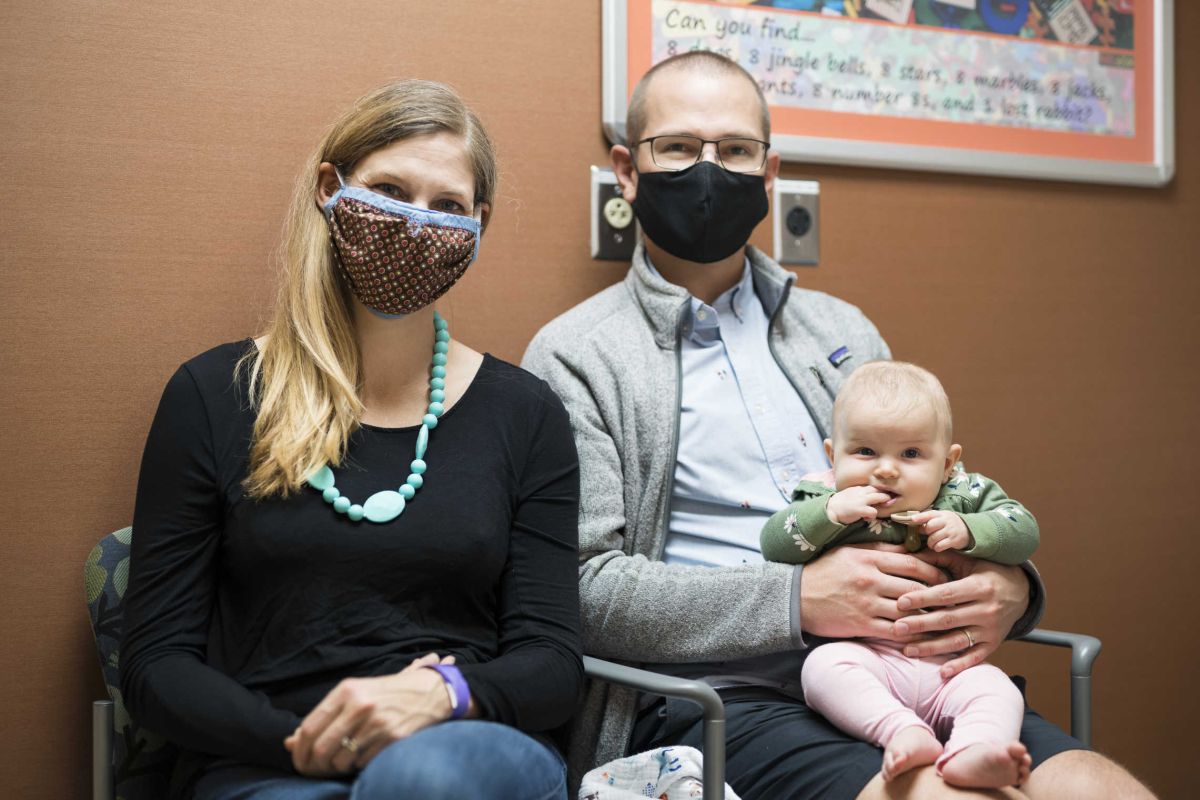 Parents Laurie and Brian Quinn are grateful for the care their daughter, Ella, received at Gillette.

July is National Cleft and Craniofacial Awareness Month. The term craniofacial refers to the head and face. Gillette Children’s is one of the top centers in the United State for craniofacial care. The Quinn family remain happy with the care their daughter, Ella, received for craniosynostosis in 2020. They provide an update and some reflections on their Gillette Children's experience.

Laurie and Brian Quinn were smitten when they welcomed their daughter, Ella, in May. As excited as they were about their new baby, they both had an instinct that something was not quite right with Ella’s head shape.

“Ella was this delightful baby and I was just thrilled to have a daughter,” Laurie Quinn, a lawyer in Minneapolis and a mother to a 3-year-old son exclaims.

“I did notice her head was a bit narrow right after she was born, but initially shrugged it off,” Laurie explains. “When I brought Ella in for her one-week check-up with a new pediatrician she casually asked us if Ella’s head shape had changed since she was born. That was the first time I realized her narrow head could actually be a real issue.”

Laurie Quinn is grateful her pediatrician, Megan Fischer, MD, at Metro Pediatrics knew what to look for when examining Ella. “What I really appreciate about Dr. Fischer is that she was not an alarmist. She told me we would keep an eye on Ella’s head shape and if things did not change in the next few weeks she would refer us to a specialist,” Laurie recalls. “Only after I asked for a worst-case-scenario, Dr. Fischer told me Ella might have craniosynostosis. I didn’t really know much about the condition and started doing online research right after that appointment.”

Craniosynostosis occurs when one or more of the joints in a baby’s skull closes too early. Children who have craniosynostosis might have an abnormal skull shape, an abnormal forehead shape or asymmetrical eyes and/or ears. Craniosynostosis is one of the most common physical deformities in infants and occurs in about one of every 2,000 births. If not corrected, craniosynostosis can create pressure inside the skull—which is called intracranial pressure. This pressure can lead to development problems, permanent brain damage or even death.

During a return visit to the pediatrician Dr. Fisher recommended Laurie Quinn take Ella to Gillette Children's. “I had really never heard of Gillette,” Laurie says. “Dr. Fischer told me ‘I send all my craniofacial and orthopedic patients to Gillette. In my opinion they’re the best.’ So that was reassuring.”

“When I started the next round of research people ‘came out of the woodwork’ to assure me Gillette was the best place to take Ella,” Laurie says. 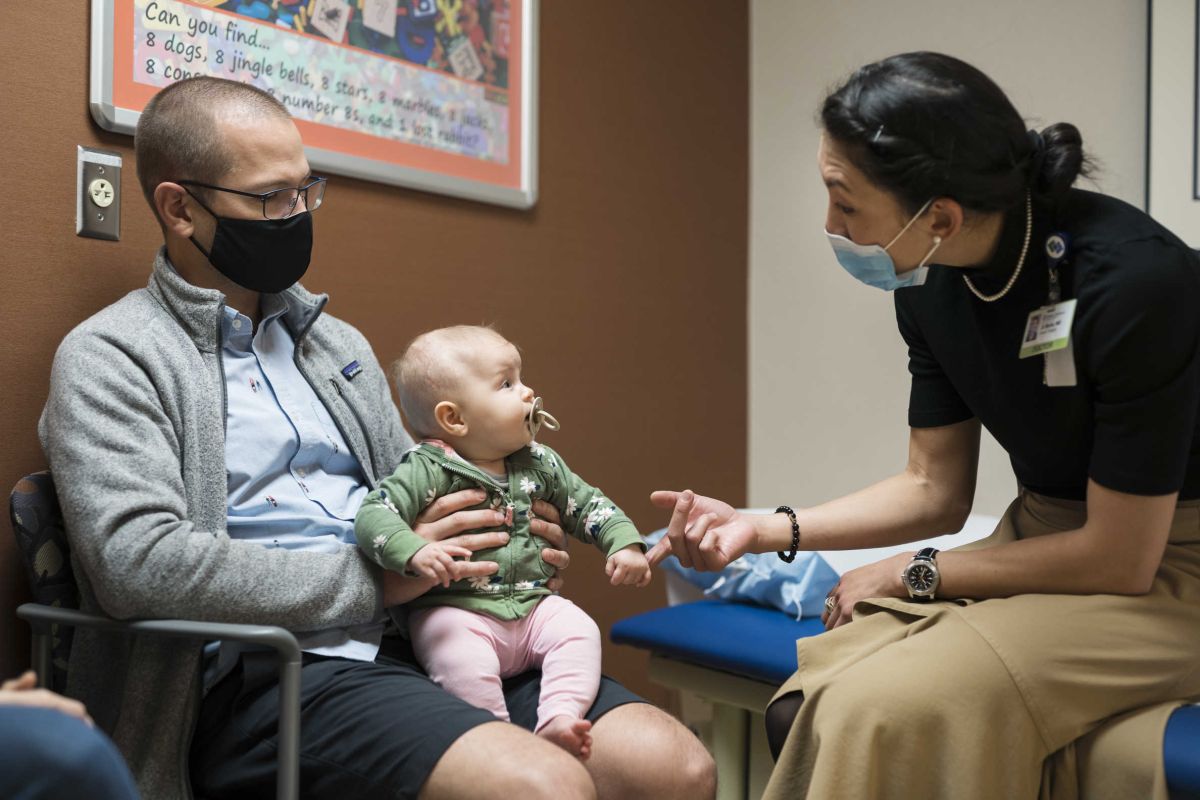 Making a Plan for Ella

At Ella’s first appointment at Gillette Laurie and Brian Quinn were surprised by the thoroughness and team approach. “We thought it would be a 20-minute consult where the doctor would say ‘she’s fine’ or give us a referral for a CT scan down the road. It was not like that at all.”

Laurie Quinn was impressed by craniofacial and plastic surgeon, Jo Barta, MD, and her expertise. “Right away she told us she suspected Ella had craniosynostosis. In one way that was hard to hear but in another way it was a relief to get the diagnosis,” Laurie says. “Dr. Barta ordered a CT scan right away. We took Ella down to imaging and in just a few minutes we were back in Dr. Barta’s area looking at the images of Ella’s head. Dr. Barta talked about the surgical options and right away we began to make a plan to help Ella.” 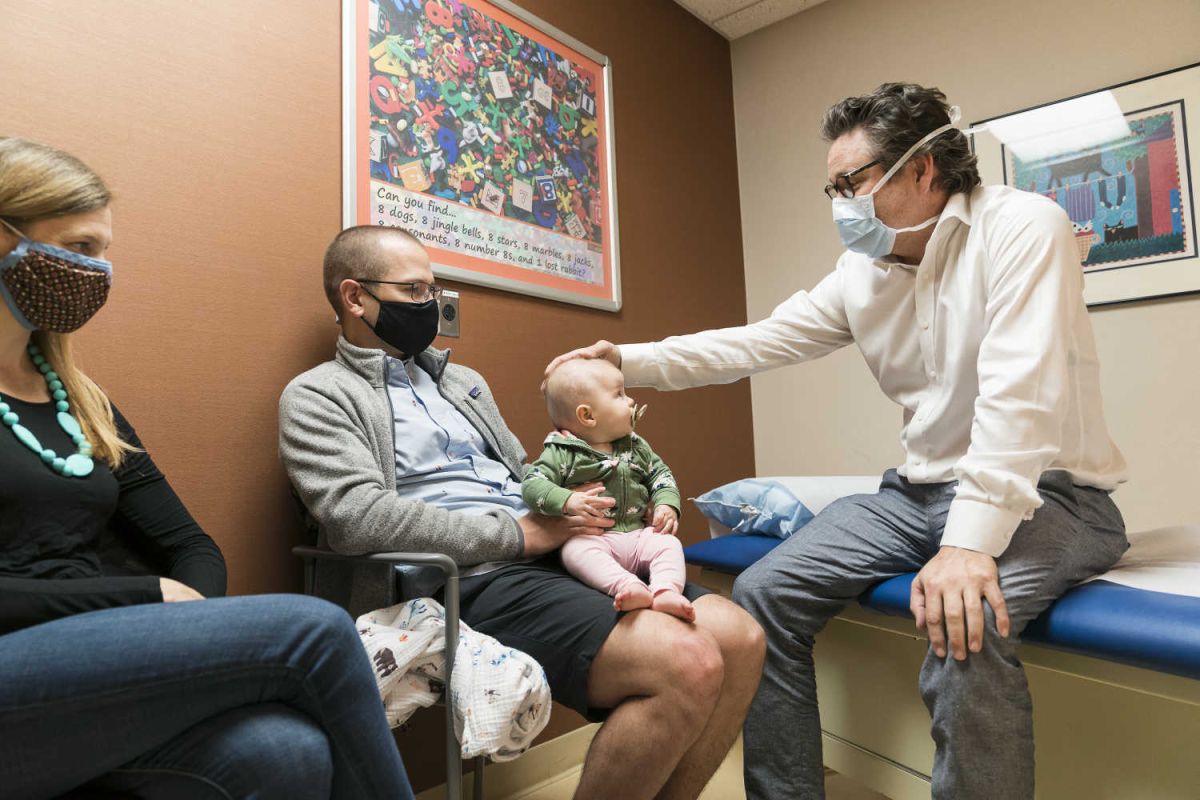 Ella’s care plan included a consultation with pediatric neurosurgeon Patrick Graupman, MD in early September 2020. Quinn was pleased Graupman and Barta teamed up to examine Ella before her surgery and she appreciated how the two made sure they had a solid plan in place for Ella’s surgery. Barta and Graupman suggested Ella undergo cranial vault reconstruction (CVR) a procedure that surgically corrects abnormal head shape and gives the brain enough room in the skull to grow.

“I was just so reassured during that pre-surgery exam,” Laurie recalls. “I could tell Dr. Barta and Dr. Graupman were very familiar with each other and with Ella’s condition. My husband Brian and I felt confident going into this complex surgery for Ella.”

Gillette has a team approach to care which allows for collaboration between the neurosurgeon and the plastic surgeon to formulate a clear, patient-specific plan. Two surgeons working side-by-side in the operating room decreases operating time and reduces the length of exposure a child has to general anesthesia.

Laurie Quinn was pleased her Gillette team put her in touch with another family with a daughter who also had similar craniosynostosis surgery. “They had a great experience with Dr. Barta and told me what to expect.”

She also connected via social media with two mothers in Michigan whose children had craniosynostosis surgery. “These two Michigan moms told me about their experiences and now, in retrospect, it really points out how excellent the care is at Gillette. Their children had blood transfusions during surgery. I remember Dr. Barta and Dr. Graupman telling me that Gillette rarely does blood transfusions during this surgery.”

The Gillette craniofacial team includes craniofacial and pediatric plastic surgeons, neurosurgeons, advanced practice nurse practitioners and other providers who’ve been carefully selected because of their specialized training in their respective fields to treat children. This comprehensive, highly-trained team has an impact on the level of care Gillette is able to provide.

Unlike some hospitals, Gillette has fellowship-trained pediatric craniofacial plastic surgeons—meaning our doctors achieved the highest level of knowledge and training in this area.

Surgery Day: Faster than we thought

The Quinn family showed up at 6 a.m. on September 10, 2020 for Ella’s surgery. “Brian and I were anxious and Ella was clearly confused and not happy to be up so early and in such a foreign environment,” Laurie recalls.

“It’s not easy to turn your child over to someone for surgery,” Laurie says. “But we had some tender moments with Ella before her surgery and felt confident with our decision. We also really appreciated being able to meet everyone who would be with Ella during surgery—the anesthesia team, nursing team, and of course, the surgeons. It was incredibly meaningful to be able to see the face of everyone who would be taking care of our baby. We were incredibly grateful to everyone for their careful answer and patience with us.”

The Cranial Vault Remodeling (CVR) procedure takes about two hours, with time built-in on either end for preparation and post-op recovery. Despite being away from Ella for several hours, the day of surgery ended up going faster than anticipated for Laurie and Brian, in part, Laurie says, because the Gillette team was so thorough with their communication. “We received a call when the surgery started and were able to speak with Dr. Graupman when his part of Ella’s procedure was done. We received calls from the OR to update us during the second half of surgery,  and then spoke with Dr. Barta when surgery was over.”

Laurie and her husband Brian were relieved when Ella came out of surgery, but were nervous to see Ella post-op. “The Gillette team warned us that it would be hard to see our daughter after surgery and to expect swelling and bruising. I am not sure any amount of explaining can fully prepare a parent to see their baby look like the just went five rounds in the ring. It was incredibly painful, especially because we were a bit helpless,” Laurie says. “We had to rely on the Gillette team to walk us through this recovery phase, and they did a wonderful job. We were assured her swelling was normal and temporary and the team helped Ella become comfortable. Ella spent one night in the Pediatric Intensive Care Unit (PICU) and two nights in a general hospital room. The team did not push us to go home and when Ella was discharged we felt comfortable we would be able to care for her at home.”

Ella Quinn is a happy baby. (Photo courtesy of the Quinn family.)

Jo Barta, MD appreciates the trust parents put in her and says the entire Gillette teams is here to help families. “A diagnosis of craniosynostosis in your child can be scary,” Barta says. “You will have many questions and it’s okay to be nervous about surgery for your child and the recovery afterwards. The craniofacial team at Gillette is here to provide reassurances and to answer your questions.”

Ella recovered from her surgery quickly and during a post-surgery appointment, Dr. Graupman and Dr. Barta were both pleased with Ella’s progress.

“Brian and I hope Ella develops on pace. She’s a lovely baby and we want her to continue to be the happy, sweet precious child that she already is,” Laurie says. “We’re so grateful we found out about Gillette, for the dozens of people who worked with us in the months leading up to and through surgery, and for the wonderful care our daughter received here.” 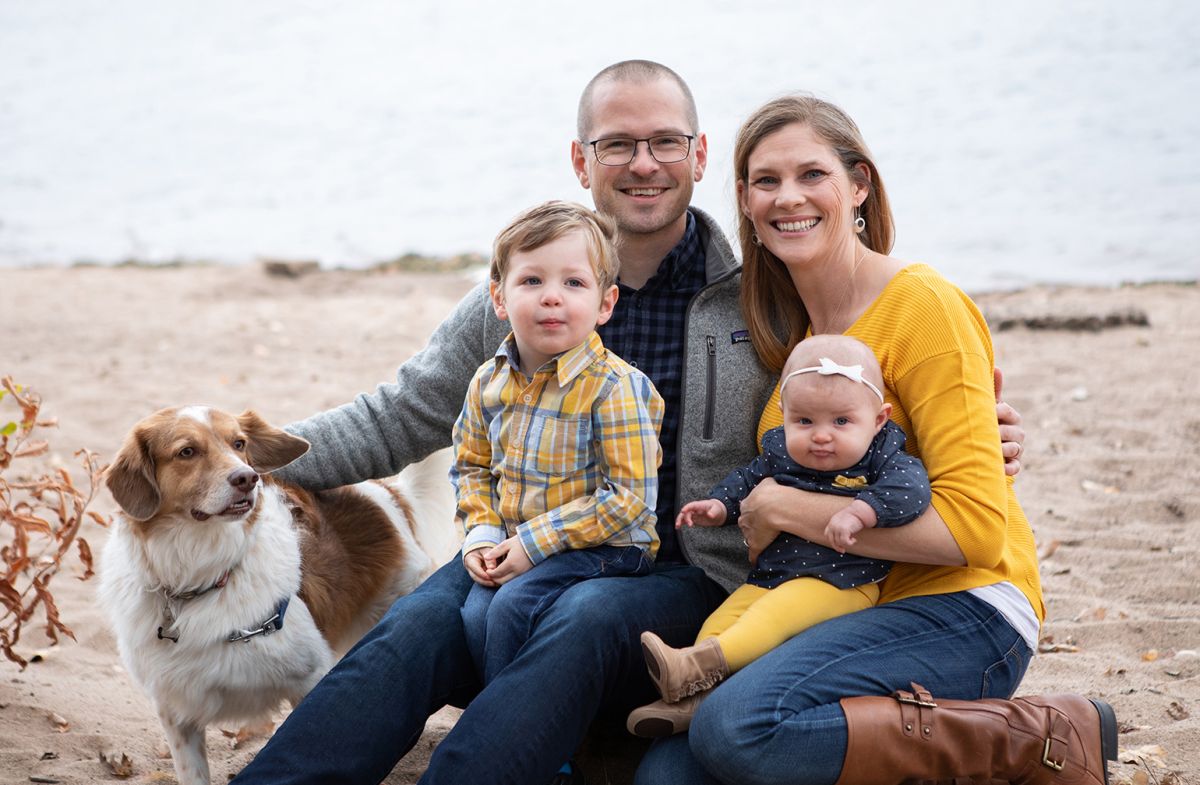 The Quinn Family. (Photo courtesy of the Quinn family.)

An Update: An Astonishing Recovery

Ella is now 2-years-old and having fun in preschool and playing with her big brother William.

Laurie Quinn says she was astonished at how quickly her daughter recovered from her craniosynostosis surgery with Dr. Barta and Dr. Graupman.

"Right after her surgery Ella was pretty swollen and I thought, 'We're in for a long recovery,'" Laurie recalls. "But Dr. Barta told us to treat Ella just like any other four month old baby and that's what we did. We were astonished at how quickly she bounced back."

Laurie says Ella's sleep was a bit off for about a month after her procedure. "We were told by the craniofacial team that sometimes babies have some disruption to their sleep due to the anesthesia and hospitalization. I'm glad we were warned and prepared."

Ella will come back to Gillette Children's for yearly check-ups with Dr. Barta until she's 6-years-old. She has an upcoming visit to an eye doctor this fall. "The tests the eye doctor will do can help determine if there's any pressure on Ella's brain. We anticipate this will be an uneventful visit," Laurie says.

Laurie adds Ella's development is right on schedule and jokingly calls her daughter "an active and opinionated toddler."

"We are just truly thankful and grateful to Gillette," Laurie says. "I often think back to something Dr. Graupman told us. He said, 'This is a one time medical event for your family.' That is true and we know not all Gillette families are as fortunate. I will say that Gillette really helps families through their medical journey and that is not lost on me." 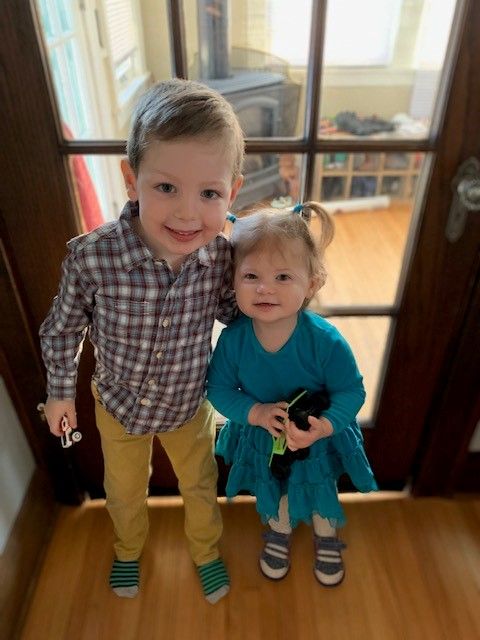 Ella is now 2-years-old and enjoys playing with her big brother William. (Photo courtesy of the Quinn family.) 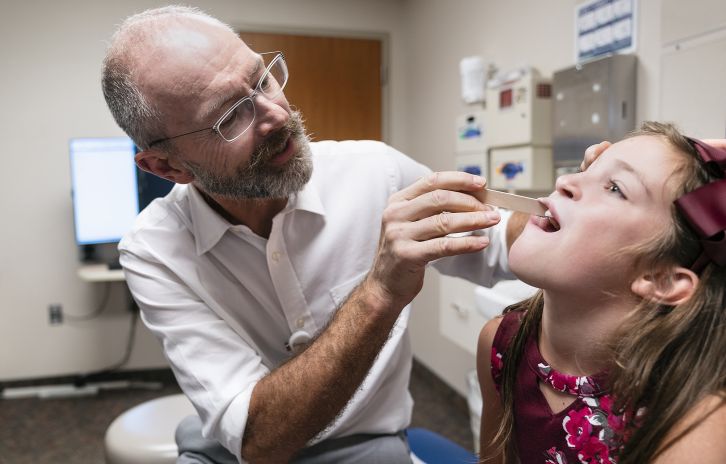 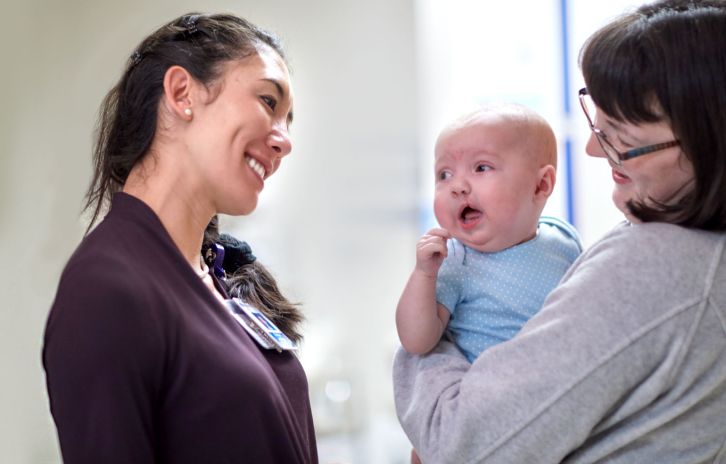